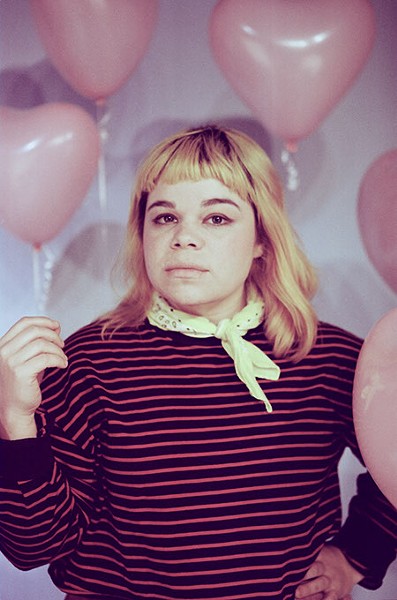 Samantha Crain stood in the bathroom of her Norman home, peering into a blood-splattered tub.

Thankfully, there was no need to call 911. Though Crain stood with a knife in her hand, no one had been killed or even injured. The beads of crimson streaking down the white bathtub and into the drain were not real blood, but a prop synthetic purchased in the first days of November.

“It was really easy to go into all the Halloween stores and get all their clearance stuff,” the Shawnee-born indie folk rock musician said in a recent Oklahoma Gazette interview.

The grisly scene is the centerpiece of Crain’s music video for the single “Oh Dear Louis” released in January along with the announcement of the songwriter’s fifth studio album, You Had Me At Goodbye. Crain marks the album’s March 24 release with an 8 p.m. show that night at Norman’s Opolis, 113 N. Crawford Ave.

As gruesome as a bloody bathtub might sound, Crain’s video feels more like a mind-bending indie art film than a Hollywood gorefest. With bright colors and cuts of a hauntingly manic Crain, it’s a video worthy of the song’s infectious chorus and quality lyrics describing the retroactive guilt many people feel when dealing with others’ mental illnesses.

The video was shot and produced by Jarod Evans of Norman’s Blackwatch Studios. Evans is primarily known as a sound engineer but has recently found success in video production, including the video for Broncho’s 2016 single “Fantasy Boys.”

Evans pulled off some vintage campiness in “Oh Dear Louis” by shooting on an old-fashioned camcorder. Crain said she specifically sought him out as the video’s producer because he’s so fresh to filmmaking.

“I think whenever people are really excited about a new art form, that’s when they’re at their most creative,” she said. “Sometimes when you get someone who’s been making videos for years and years, it might technically look good, but there’s not a lot of inspiration behind it.”

The trippy music video for “Oh Dear Louis” might be one of the first signs fans have that Crain is cutting loose on her new album.

The 30-year-old has been playing music professionally since she was a teenager. Her first gig at Opolis was when she was 19. People immediately noticed her talent for songwriting and, perhaps unfairly, stuck her with some lofty expectations and descriptors. She latched onto the “old soul” moniker in particular.

“Because I was really young and didn’t really know who I was, I just grabbed ahold of that label and let it permeate me,” Crain said. “I was super serious about what I was doing, and I think I missed out on some of the fun that comes along with making music and art as a young person.”

The older the musician gets, the less she cares about satisfying other people’s impressions of her. It is not that music has become any less important, but the realization that she is defined by more than others’ perceptions.

Having fun and cutting loose is more of a general philosophy and guiding inspiration to the album than it is a tangible lyrical theme. Crain writes songs in the same way (but maybe even more skillfully) than she has before. John Vanderslice, who produced Crain’s last two full-length albums, rejoins her for You Had Me At Goodbye.

The biggest difference this time around is that this project shows an even rockier, more electric edge than past releases. Many of the songs have a more distinct pop structure, and there are fewer acoustic instruments featured overall.

Learning to let go does not mean accepting work of substandard quality. In fact, Crain has never been more on top of her game.

“I’m still just as focused, and I have probably more of a vision than I’ve ever had as far as the things I want to make,” she said. “I’m just not taking it as serious because in the end, I don’t have control over how it’s received.”

Crain began writing for You Had Me At Goodbye on a train somewhere in Europe while touring in the fall of 2015. The musician has become a popular performer across the Atlantic Ocean and will return to Europe for a two-week tour just days after her Oklahoma release shows at Opolis and March 25 at Tulsa’s The Shrine.

Though she still enjoys playing shows in the United States, Crain believes the European market offers musicians at her level a more ready audience than can be found in Oklahoma or any other state.

At times, it seems like a live band can be found in the corner of every bar and watering hole throughout a city. The saturation has become so dense that some people see live music less as a special occasion and more as background noise as they see and talk with their friends.

Crain said her experience in Europe has seen more shows starting in the evening in front of a crowd at music-centered venues than the more American late-night show at a place where music is not the focus.

“The live music scene [in the U.S.] is completely built around unemployed 20-year-olds,” Crain said. “That’s a very small group of people that I’m growing out of.”

Album release dates are typically a tense time for Crain. Each new release had the potential to be either the wave to ride on the way to success or the thing that could sink her title as “the next big thing.”

On her new album, Crian waves a bon voyage to self-imposed pressure.

“I’ve always had a sense of there being something to gain or lose at an album release,” she said. “But now I think I’ve lost that ideal. I think I’m in a point in my life where I just want to make art and if people hear it and like it, then they do. And if they don’t, fine.”

Preorder You Had Me At Goodbye at samanthacrain.com.