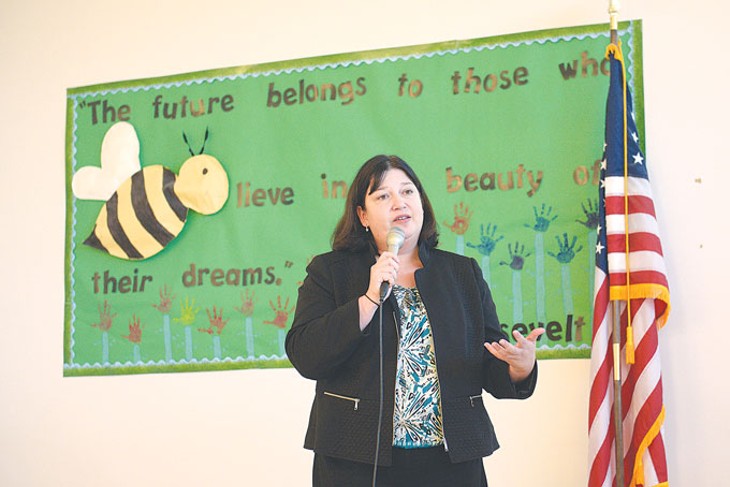 After five years of leading Oklahoma City Public Schools, Marvin Crawford stepped down early in the spring of 2000, buying out his contract and heading south to Texas. As Crawford crossed the Red River, no one could have imagined his departure would set off a revolving door of superintendents that continues to plague the district today.

In the last 18 years, 11 individuals have led the state’s largest school district. Aurora Lora, the district’s most recent superintendent, penned a letter to the eight-member Oklahoma City Public Schools Board of Education last week, informing them of her resignation. She served 18 months of a three-year superintendent contract. At the beginning of February, the district’s Rebecca Kaye assumed the role of acting superintendent. Kaye joined the district 13 months earlier as a member of the superintendent’s cabinet in the position of chief of staff.

The constant change in leadership has prompted questions by community members and school observers. Why does Oklahoma City lack the ability to retain an effective superintendent? How can the district reset the course?

“This district has to be transformed,” said Ed Allen, president of the Oklahoma City American Federation of Teachers. “We are so dysfunctional. Until you transform, get rid of the dysfunction and get the organization where it can work in a proper manner, no superintendent can bring in a great idea. It wouldn’t work. The organization has to be fixed.”

A number of factors contribute to the short tenure of urban superintendents, explained Keith Ballard, a longtime Oklahoma educator who served as superintendent of Tulsa Public Schools from 2008-2015 after spending eight years as executive director of the Oklahoma State School Boards Association.

“The reason it is more difficult is because of the broad constituency that you have,” said Ballard, who currently teaches educational leadership and policy studies at University of Oklahoma Tulsa’s Jeannine Rainbolt College of Education.

The constituency ranges from students and parents to school board members and staff. At the same time, urban superintendents are in frequent contact with their city’s mayor and chamber of commerce as well as unions and the media. Board members, who are elected officials, represent a geographical area of the school district. In Oklahoma City, those wards, known as districts, are diverse in culture, economic status and other characteristics. Superintendents must unify the board to work toward the betterment of all children in the district, Ballard said.

In urban areas, districts see higher numbers of students entering school unprepared or behind because of poverty.

“Part of the solution is [for an urban superintendent] to be grounded in a philosophy,” said Ballard, who also recommended urban superintendents seek individuals to serve as advisors from the diverse communities, including faith and ethnicities, as well as a teacher advisory board. “If you are not grounded, you will grab this program out of the air and that program out of the air. You will not succeed if you do that. Programs come and programs go, and there are good programs. You have to be experienced and very grounded in a philosophy. For me, my philosophy first and foremost is to value the classroom teacher.”

Even before Lora’s departure, the community was eager for stability at the district’s top position. The board thought they had achieved that with the last two superintendents.

Robert Neu, a Seattle-area administrator with more than 20 years of experiences in education, landed the superintendent position in July 2014. Twenty-two months into his contract, Neu and the board reached a separation agreement. Neither board members nor Neu publicly revealed why Neu’s employment was cut short.

In the summer of 2016, Lora, the district’s associate superintendent, who was initially given the job temporarily, replaced Neu. Lora had never served in the role of superintendent before.

Lora guided the district in crafting its 2016-17 school year budget, which was $30 million less than the year before because of state budget reductions and fewer federal dollars appropriated for technology services from e-rate. By fall, Lora presented a plan to invest in the district’s infrastructure and voters passed a $180 million bond measure. At that same time, building principals expressed frustration over Lora’s leadership, delivering a “lack of confidence” letter to the board near the end of 2016.

The following spring, school board elections brought new members Charles Henry and Rebecca Budd to the eight-member board. Paula Lewis, who represented District 4, was elected board chair. She appointed Mark Mann to fill her vacant seat. Meanwhile, Lora floated a proposal to close several schools in response to anticipated state budget cuts. The community responded in an uproar. Lora backtracked the proposal with no schools closed.

Last month, a day after the board reviewed Lora’s performance in a closed-door executive session, Lora wrote about her frustrations with her “bosses” on her social media account. Lora later removed the post and apologized. A week later, Lora resigned.

“Our board has gone through some transitions during my time here and I believe that it is now time for me to step aside and allow you to come together as a team to find a leader that will be right for you as a new board,” Lora wrote in her resignation later.

“Two of the best superintendents we’ve had were Linda Brown and Dave Lopez,” said Thompson.

“The district was in crisis,” Thompson said. “They hired someone with experience and no agenda. They did an excellent job.”

Allen, who leads the teacher’s union, said he has already suggested to some board members that the search for a new leader be revised.

“I think more people need to be at the table and talk about the entire process of hiring a new superintendent,” he said.

He named the union, the business community, parents and other stakeholders as deserving seats.

No single individual in the role of superintendent can redeem the district, Allen said. Instead, it will take strong leadership throughout the district.

For Oklahoma City to gain staying power from its next superintendent, Ballard recommends the school board seek a candidate with experience, strong communication skills and a history of forming relationships within the communities they’ve worked.

“It needs to be a person who has character and understands ethics,” Ballard said. “I think it needs to be someone who has tough skin, someone who can persevere through tough times and someone who is interested in people first and programs second.”

Print headline: Another gone; Oklahoma City schools have been down this road before. Revolving leadership continues.