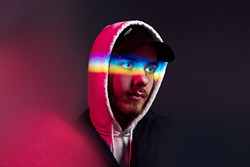 The probability of a guitar-playing Dutch trap DJ finding wide-ranging success in the super-saturated United States electronic dance music market might seem a little unlikely. But, to borrow a famous phase from San Holo’s Star Wars namesake, never tell him the odds.

San Holo, born Sander van Dijk in the western Netherlands, has carved a global following for himself by producing melodic and thoughtful songs that are still highly danceable.

Growing up playing guitar in bands with his friends, Holo switched to electronic production as a way to capture complete musical and creative autonomy.

Holo built a following early on with remixes of popular rap songs like Dr. Dre’s “The Next Episode,” Outkast’s “Ms. Jackson,” Eminem’s “Lose Yourself” and more. He has released a few EPs, including Victory in 2015 and New Sky in 2016.

In 2017, he released a pair of popular singles, including “One Thing” and “The Future,” a collaboration with Irish indie folk and alternative singer James Vincent McMorrow.

Oklahoma Gazette spoke with Holo ahead of his scheduled show in OKC.

Oklahoma Gazette: You’re known for sometimes bringing your guitar up onstage. How interested are you still in guitars?

San Holo: Guitar is where it all started for me when I was about 13, so still very interested. I played guitar all through my teens and got admitted to Codarts [University for Arts] in Rotterdam (Netherlands) where I studied guitar after high school. I would always put a lot of time and energy in the bands I was playing in at the time, but they would always break up because of all the bandmates’ different opinions. That’s why I started the San Holo project, to have something that was completely mine and to have the freedom to do whatever I wanted to do. Although it started out with electronic music, it feels great to be incorporating guitar into my songs and live sets again.

OKG: How many do you own? Do you have a favorite?

Holo: I have been very lucky with the support from Fender on this tour. My first guitar was a Squier Strat, and I have always been a Fender guy. It’s really nice of them to help me out. I own four guitars at the moment. I have a Mustang and Duo Sonic from their Offset series, which I tour with, and my absolute baby is my Fender Highway Strat, which was the main part of my guitar sound when I played in bands. I also have an acoustic Avalon. I don’t remember the series, but it just sounds amazing.

OKG: Do you think we will see more artists blending DJ skills with traditional instruments in the future?

Holo: I have no idea, to be honest. Every producer has a different background. I started out with guitar, but there are also a lot of producers that just started out with no instrumental background. It’s also quite an undertaking to bring all the gear on tour, especially for up-and-coming artists/DJ’s. I could’ve never done this when I first started touring because of the logistics, for example. But I’m very happy that I get to do this now.

OKG: You recently put out a video for your single “One Thing,” which is a song about continually chasing after whatever the next big thing in life is and never being satisfied. How do you balance the desire to advance yourself and your career while still staying grounded and appreciating things as they come?

Holo: I wouldn’t say I’m the best at this, especially on tour, because it’s such a rollercoaster. I don’t have a lot of time to reflect then because I usually only see the inside of a club and then it’s straight to the airport with no sleep to catch the next show. But when I’m not touring, I certainly take more time to reflect and appreciate the things that are happening. Making new songs at home is definitely a good way for me to rebalance again. I always feel grateful to be doing what I do, but sometimes it’s more apparent than other times.

OKG: “The Future” also seems to be about the challenges of getting caught up in what’s coming down the pipe. Would you call yourself a particularly reflective or introspective person?

Holo: I think a lot about all types of things. The future is definitely one of those things. Where do I want to go? What do I want to achieve? That type of thing. Sometimes it can be very helpful, but it can also be stressful at times. You can make thoughts or problems bigger than they really are, which can make you feel self-doubt or frustrated or sad while there might be no need for it.

OKG: How did you connect with James Vincent McMorrow? What was it like working with him?

Holo: I’ve been a big fan of him for a long time. I was working on this idea, and it needed vocals. So I just sent him an email to ask if he would have any interest in working with me. I was really surprised when he replied! He wrote the lyrics and did some takes until we had the final song. He’s really inspiring to work with. Even though we come from totally different styles of music, we both think the same way about music. I think that’s why it worked so well. We just understood each other and respected each other’s backgrounds and tastes.

OKG: A lot of people know you from the many hip-hop songs you’ve remixed. Do you remember your introduction to hip-hop?

Holo: I remember being, like, really anti-electronic or hip-hop music when I was a teenager. I thought I could only like one style of music. For me, that was rock-related stuff because of the guitar playing. I liked scratching stuff like what Limp Bizkit did. And later, I started to like guys like the Beastie Boys. But they were still like a hybrid between hip-hop and rock. My first introduction to “real” hip-hop would have to be Dr. Dre and Snoop Dogg’s “The Next Episode.” That’s when I thought to myself, “OK, now this is hip-hop and I freaking love it!”

OKG: What do you have in store for 2018? Anything we should know about?

Holo: I’m taking some time off in the beginning of the year to just work on music 24/7. And maybe even some album material — who knows? As for the rest of 2018, we’ll just have to wait and see.