The chefs at Guyutes have spiced up the traditional BLT with an added kick. 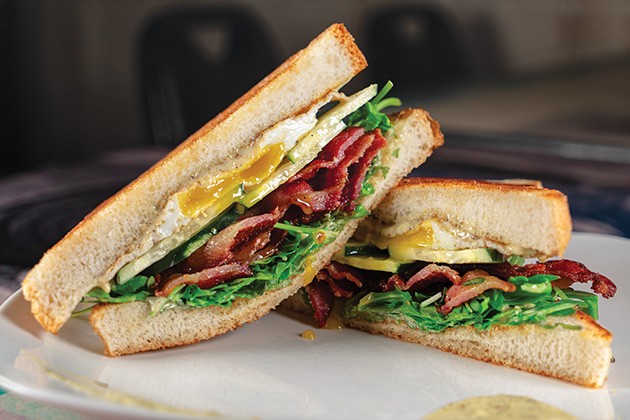 If you are going to make a sandwich, you might as well have some fun with it.

Each month, the chefs at Guyutes team up with Oklahoma Gazette to bring readers a fresh take on cannabis-infused dishes.

“We’re gonna do a bacon, arugula, cucumber and egg sandwich, a play on a BLT,” Matt Pryor said.

“We wanted to go with a little bit more that that pepperiness of the arugula with the freshness of the cucumber and it’s going to go well. It’s going to be a roasted jalapeño mayonnaise. I figured if we have any residual flavor from the infusion that the jalapeno will kind of mask it and it’ll give it a nice spiciness to change up from your regular mayonnaise that most people just get bored with or don’t like in general,” he said.

Making the infused mayo is the hardest part of the recipe. Pryor recommends using an electric mixer.

“I’d recommend a mixer for most people just because it’s so intensive whenever you’re doing it by hand, your arm will basically want to fall off by the time you’re done making the mayonnaise. You’re going to try to go as slow as possible. You don’t want to put too much oil in it all at one time, so you’re going to start with just a slow drip because you want those molecules to slowly start to open up the egg molecules and you just want them to absorb as much oil as possible. As you do this, you’ll notice that the egg will actually start to change color and lighten by adding all the oil and air into it, ” Pryor said.

“It’s not a joke. You’ve got to do it super slow. I did a test run beforehand with a hand mixer and tried to do like a teaspoon at a time and that was way too fast and I just ended up with this mess of goo,” Jarrod Friedel said.

The rest of the recipe is pretty straightforward and will add a burst of flavor to one of the simplest dishes imaginable.

“When we were talking about this, I was like, ‘Man, tomatoes are gross. Marinara is good, salsa is good, but tomatoes are gross. Let’s do something else.’ Cucumbers are the only thing I can think of that have enough water in it that would make it still kind of crunchy but have enough moisture in it there was still tastes like you’re biting into a sandwich. I think BLTs are a joke anyway. Bacon’s great, but it’s not a meat.  If you’re going to give me a BLT, you’d better put a pound of bacon on there so I feel like I’m biting into a sandwich. I was really hoping I could do something where I can make it be a BAKE, but BACE was the closest we could come up with,” Friedel said.

I like raw tomatoes but much prefer them in a salad or simple in-season tomatoes with fresh cracked pepper and salt in the summertime. I completely understand why people don’t like tomatoes on a sandwich. People complain that they don’t have much flavor — a problem that can be mitigated by allowing them to reach room temperature before cutting and then applying salt. My problem with tomatoes on a sandwich has to do with its structural integrity. I’m tired of biting into a tomato, only to have it push the rest of the ingredients off the bread. I commend the chefs at Guyutes for reinventing the BLT without the T. I might even do a quick marinade on the cucumber with red wine vinegar, garlic, salt and black pepper. The cannabis-infused mayonnaise was very tasty, and  any lingering cannabis flavor was covered up by the spicy kick of jalapeño. The egg even held up after a few hours in the refrigerator, and I enjoy the sandwich cold as much if not more than it would be if it was hot. I ate half the sandwich and enjoyed a good body high for about six hours.

1. Do not tell me you got so high you need someone to tell you how to make a sandwich.

1. Roast or grill the jalapeños until soft, then blend them and set aside for later use.

2. In a stand mixer, combine the two eggs and 1 teaspoon of dijon mustard. Mix until egg starts to thicken.

4. As the color of the yolks starts to lighten, add the lemon juice, vinegar and salt and pepper and continue mixing.

5. Add the half cup of oil at a constant light stream until fully emulsified.

6. Slowly fold the roasted jalapeño puree into the mayonnaise.

1 cup of canola or olive oil

2. Remove the oil from the heat. Allow it to cool.

3. Strain the oil over cheesecloth into an airtight container for at least 45 minutes. Do not squeeze the cannabis flower.

4. Store any excess oil in a dark container in a cool, dry place. Refrigerate it to extend the shelf life to several months.