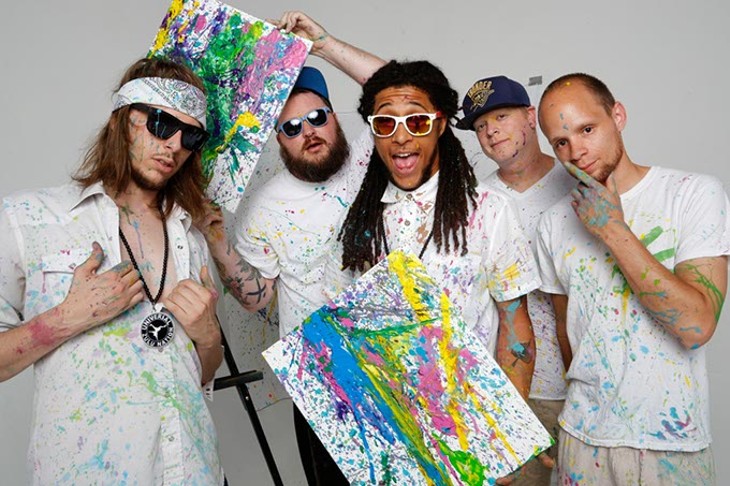 As if fulfilling their own untold prophecy, Oklahoma City hip-hop collective Sativa Prophets found one another through a mutual creative hunger.

There are rappers in the city. There are producers. There are visual artists. As a group that accepts many avenues of expression, Sativa is all of those things and none of them.

“We came together for Sativa Prophets with the idea that anyone can be a Sativa Prophet,” member Mike HuckWheat said, “Sativa meaning creative and prophets meaning storytellers — more than emceeing, more than me, more than us.”

Igloo Panda, a local music producer who specializes in jazzy, psychedelic sounds akin to Aphex Twin and Flying Lotus, was ready to leave Oklahoma altogether and pursue music in Austin before the Prophets were formed and convinced him to stay local.

Panda met emcee Rodrick Malone through another friend and Sativa member Atomic Calm. Through that connection, he then joined up with HuckWheat and Umi Ra Shakir, formerly known as Mr. 808. There are now seven to 10 members in the Prophets’ informal collective.

Panda emphasizes that the Prophets are not as much a music group or band as they are a collective of individual artists. Members support one another’s artistic endeavors, be it musically, through visual art or otherwise.

“I think Sativa Prophets is about artistic expression,” Panda said. “If anyone in the Prophets wanted to branch off into anything, be it visual art, film, poetry — anything really — we’d all be behind each other and support each other.”

The full extension of the collective’s creativity can truly be seen in their paintings. The visual art bug started with Malone, a frequent drawer and painter who moved in with Panda prior to the Prophets being formed. After watching the documentary Gerhard Richter Painting, he bought in fully.

After Panda got into it, HuckWheat decided to try his hand in the medium. His first painting started as a collaboration with Panda. He went on to do 10 in his first week.

“First one I painted, someone said, ‘How much?’ which was what kept me going also,” he said. “It’s just another outlet. I tore my ACL two years ago and can’t play ball like I want to, so it helped me get my mind off life and feel free.”

The Prophets hope they can spread the good news on creativity throughout Oklahoma City and the region, an area not necessarily known for having an affinity with hip-hop culture. Shakir called the local scene “a gruesome motherfucker.”

Members agree there is talent in the state but suggest that many local artists are too often divided amongst themselves and competitive. The mindset of the Prophets, Malone said, is to work together toward a common goal.

“We’re a collective of artists,” he said. “People always want to divide and separate. To me, art is art. There’s art in everything. Music is what brought us together, but that’s just one aspect of what we all have to offer.”

More information and music from the collective can be found at sativaprophetscollective.com.