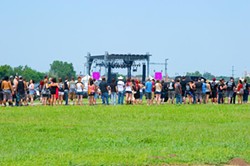 Steve Stein is pretty up front about his reason for the Skyline Food Truck Festival. It’s for a great cause that has helped many of his friends, and he hopes it sticks around for a long time to help more of them.

The Red Dirt Relief Fund is a nonprofit that helps Oklahoma musicians get back on their feet due to housing or medical expenses. One of the most anticipated guests, Mike Hosty, benefited from the fund in the spring. Okie musicians raised money for his medical expenses. Hosty is now back in top shape and ready to rock.

Stein owns Route 66 Road House, 4328 NW 39th St., a bar that features live music on the weekends. He has made connections with various Oklahoma musicians in his time running his bar and the food and beverage service at OKC Downtown Airpark. His friend Stoney LaRue was also a big help.

“How this even came up is we were sitting in Stoney’s bus and he thought it would be a great idea,” Stein said. “He’s able to help because he’s part of the Red Dirt Relief Fund, and sometimes when a musician has a little bit of clout like he does, he can encourage other musicians to contribute their time.”

LaRue had a prior engagement for this festival, but he plans on performing at future ones. That’s right; there will be more food truck fests.

“It’s a show we can keep going once or twice a year, and we’re committed to having only Oklahoma trucks and musicians,” Stein said.

He was quick to list several sponsors contributing. Mustang Brewing Company is donating beer for the VIP tent and will have a presence at the fest. Local businessman Guy Clark, who is part owner of Tumbleweed Dance Hall at Lakeview Drive and Country Club Road in Stillwater, is another sponsor.

Starting at 9 a.m., there will be a car show and four to five breakfast trucks, including OKC favorites Crepe Brewers and Stillwaffles out of Stillwater. Coffee and Cars, which has a monthly car show at Northpark Mall, is sponsoring the show. According to Stein, around 400-500 cars will be at the festival. The car show begins at 9 a.m. and lasts until about noon.

“Starting at noon, we’re going to have bands on two stages, and the bands that are going to play are all Red Dirt-Americana,” Stein said.

The list of entertainers includes The Chase Sandford Band, Chad Sullins and the Last Call Coalition and Aaron Newman & The OK Caravan.

During that time, there will be 35-45 trucks lining the perimeter of the outfield. The festival is more than an opportunity to visit H&8th Night Market favorites like Kaiteki Ramen and The Hall’s Pizza Kitchen; there are plenty of trucks from out of town, including Mexiasian Fusion from Lawton and The Dog House from Tulsa.

For the ultimate experience, including free beer, festival swag and a shaded place to cool down, you can purchase a VIP ticket. General admission to the fest is free; however, there is a fee to park.

Klein hopes the festival will become a regular OKC event.

“It’s kind of the old drive-in movie theory — you can stuff 10 people in your car or you can have one person in your car, both for $10,” he said.

For information about the festival, including a complete list of both bands and trucks, visit its website at skylinefoodfest.com.

Year of the truck, The inaugural Skyline Food Truck Festival celebrates two things that Okies love: food trucks and helping out a good cause.