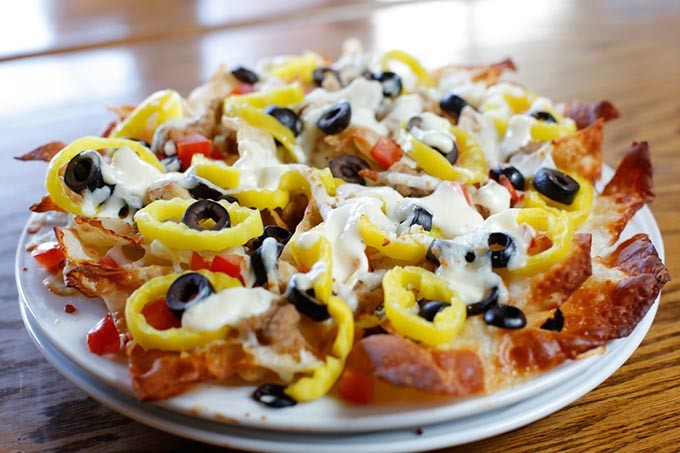 When is the last time you heard someone say they don’t like pizza?

In high school, a friend of mine was deathly allergic to flour products, but even he would get pizza and just eat the toppings and cheese and sauce. It’s an almost universally beloved dish.

Rich and poor, young and old, half-mage and half-thief, everyone loves pizza. And Sauced on Paseo, 2912 Paseo St., makes some pretty excellent pizza.

Plenty of people love that pizza, yet I know I will get yelled at for saying this.

When this sees print, I will likely receive a few unkind messages from the former owner of Sauced, as I have when I’ve written about Sauced on Paseo in the past. But, you know, stuff happens.

The current owners have had the business for five years now.

They weathered some pretty daunting storms, including a wave of criticism from customers of the previous establishment.

And they’ve turned the restaurant from a patio bar that occasionally served pizza into a powerhouse on the popular Paseo strip.

So let’s talk about what makes Sauced on Paseo so good.

First and foremost, the pizza is top-notch. It has a good crust that holds up under a mountain of toppings without detracting from the overall flavor.

My personal favorite is the Loaded Hawaiian ($12 for a small, $17 for a medium and $20 for a large), which takes the classic combo of Canadian bacon with Hawaiian pineapple and adds regular bacon and jalapeños. It’s a-spicy. It’s a-sweet. It’s a-what I order all the time.

On a diet? Try the Gardenia ($12/$17/$20) with mushrooms, artichokes, zucchini and romesco sauce. It’s less a pizza than a cooked salad on a crust, but it’s still pretty good.

For a truly unique pizza, the Green Lantern ($15/$21/$24) has pear, feta, spinach, mozzarella and capicola — a spicy ham that might be the reason people invented that move where you pinch your fingers in front of your pursed lips and then explode it while making a kissing sound — over garlic and oil sauce.

But I always recommend people get the Suicide Pie! ($28), which has a slice of almost all Sauced’s specialty pizzas packed together in one box. I’m especially taken with its take on Buffalo chicken, which uses a slightly tangy blue cheese sauce as the base with chunks of spicy chicken on top. It won’t replace eating hot wings, but it is a pretty nice homage.

That said, you can just get some chicken wings (6 for $6.50), but I recommend eating them quickly. They aren’t quite as crisp as I prefer them, but they’re still very satisfying.

The Italian nachos ($7.50) are a monster and should not be underestimated. We’ve lost some good men down there, trying to dig wonton chips covered in sausage and chicken and peppers and olives from that cheesy mess of Alfredo sauce and mozzarella. (They didn’t die; they just got heartburn.)

And if, for some reason, you simply cannot abide another slice of pizza, I recommend the Italian club ($7). It’s a sandwich packed full of salami, pepperoni, capicola, peppers and olives drenched in red sauce and melted mozzarella. Definitely take your Prilosec before starting this one.

There’s no way you should have room for dessert, but you will find a way to make room for one of Sauced’s enormous bricks of Rice Krispies treats.

You guys head down there and order us a pie.

Print Headline: Feeling Sauced, This pie purveyor offers some of the best around — you know it’s true.

What needs work: It can get pretty busy when people want pizza, which is always.

Tip: Suicide Pie! is the best way to try a little of everything.