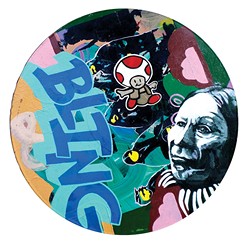 Artist Hoka Skenandore felt like his work was out of place.

He was honored when America Meredith, a Swedish-Cherokee painter and publishing editor of First American Art Magazine, invited the Shawnee resident to join Savages & Princesses: The Persistence of Native American Stereotypes, a two-month exhibition she’s curating for 108 Contemporary.

Savages & Princesses runs Aug. 5-Sept. 25 at 108 Contemporary, 108 W. Brady St., in Tulsa. The concept behind the show is to confront Native stereotypes with humor and satire through contemporary Native art.

Skenandore, Oneida-Oglala and Lakota-Luiseño, could certainly be called a contemporary Native artist, but he was unsure how his series of 13 painted vinyl records would work with other artist submissions.

“My work doesn’t fit that idea, though it did prompt me to add portraits of Native People into the mix of my usual, random juxtaposed imagery,” he said.

Eventually, Skenandore realized that the need for Native art to look “Native” is a stereotype in and of itself. His street-styled, brightly colored designs over LPs do not look like anything found in a natural history museum.

The opportunity to give actual Native artists a say in how they are perceived is 108 Contemporary’s primary motivator in hosting the show, which is worth making the road trip to Tulsa.

Krystle Brewer, 108 Contemporary managing director, said organizers began planning Savages & Princesses about two years ago. Brewer was partially inspired by the work of Zachary Presley, a Chickasaw artist in Durant who often explores issues of identity in his art. He also is a featured artist in the exhibit.

Brewer met Meredith while the artist was a guest curator for Oklahoma Visual Arts Coalition’s (OVAC) Momentum Tulsa 2015 exhibit. They discussed an idea she had to bring work like Presley’s to an exhibit at 108 Contemporary. Meredith said she was open to the idea and agreed to curate the exhibit.

Savages & Princesses is an opportunity to experience contemporary Native imagery from the source instead of mass media.

“By choosing a Native curator who’s working with the Native artists, we’re giving them a platform or an area where they can have their own voice on the topic,” Brewer said, “because so many times, their images are reappropriated in ways where they have no say.”

Brewer said the show will be fun and light, with deeper meaning underneath the levity.

“It’s going to be very brightly colored, a lot of humor and satire,” she said. “The idea is to make these really heavy, sometimes dark topics — like one of them addresses scalpings and redskins — but doing it in a way that’s approachable and humorous.”

Skenandore said he found out about Savages & Princesses after Meredith emailed him to ask if he wanted to participate in a Tulsa group show. He agreed because of his admiration for the curator.

“Working with [Meredith] is a blast,” he said. “Plus, she tends to gather together very talented individuals, and I am extremely humbled to be counted among them.”

Matt Bearden, a Citizen Band Potawatomi artist in Tulsa, said he was similarly excited when Meredith approached him. The show fulfills his longtime goal to be featured at 108 Contemporary.

“Those large, white walls are just screaming for a monster canvas,” he said.

Bearden first planned to exhibit a few satirical football helmets from his Sacred Mascots series and a mixed media piece examining the Native alcoholism stereotype, but his plan soon ballooned into a Native hometown version of Pablo Picasso’s “Guernica.”

He said the gritty piece is an allegory of his childhood and his prejudices growing up in Osage County.

“It’s going to require the viewer to think a little and not just take an image at face value,” he said.

Eastern Band Cherokee Shan Goshorn submitted a basket titled “Vessel.” A nude and pregnant woman is depicted on its side, along with the Luther Standing Bear quote, “It is the mothers, not the warriors, who create a people and guide their destiny.”

Goshorn said the choice to show an undressed woman emphasizes her pregnancy and removes the perceived dress often attributed to American Indians. She said Native women are often portrayed in sexually objectified ways.

“The world seems to think that Native culture is open for appropriation and free for the taking, not realizing that much of this usage directly violates the sacred intent of the way we use eagle feathers, the way we dance and paint and dress ourselves,” she added.

Norman artist Tom Farris, who is Otoe-Missouria and Cherokee, said exhibits like Savages & Princesses are good for artists because they allow them to take more chances artistically.

“I really appreciate shows like this because it allows me to approach the creative process from a purely conceptual perspective and removes the concern of sales,” he said.

Bearden said he is just half-Native and is eager to see how other artists in the show address the stereotypes they constantly come up against. He wants the exhibit be a place for open conversations about the topics presented, not an opportunity for in-your-face activism.

“I hope people can look at these works with arms unfolded and open to interpret and see things from other perspectives,” Bearden said. “We don’t know what the other guy is dealing with in their lives, so maybe we can stop arguing and yelling at each other and ease off the reactionary attitude.”