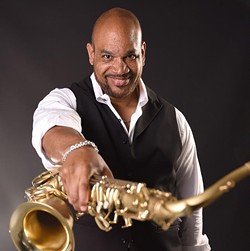 June marks the return of OKC Jazz Fest, a local tradition for many lovers of jazz and live music.

Several big names have cycled through the festival’s roster during its four years, including Color Me Badd and The Gap Band in 2016. This year’s schedule features a full month of jazz performances, including Edgar Cruz with his bluesy group Brave Amigos, guitarist and vocalist Adam Aguilar, other regional performers and U.S. Grant High School and Classen School of Advanced Studies student jazz bands.

One common festival thread through the years has been Eldredge Jackson. The gifted jazz saxophonist, known for his past work with University of Oklahoma basketball star turned jazz-bass phenom Wayman Tisdale, performs in the festival each year and returns this year as an event headliner.

The album unintentionally turned into one of Tisdale’s farewell projects. A malicious knee cancer eventually led to a partial amputation of Tisdale’s leg and his eventual death in May 2009.

Jackson, one of the last musicians Tisdale produced, said he put much of his touring and album promotion on indefinite hold after Tisdale’s diagnosis. The saxophonist has not released album since Listening Pleasure but is hoping to reintroduce himself to the jazz world with a yet-to-be-named follow-up project he plans to debut in the next several months.

Jackson is using OKC Jazz Fest and a series of area festivals and concerts to pave the way for a new release. He said he always looks forward to coming to Oklahoma City for the annual event.

“As jazz musicians, we look for every opportunity to continue to play and promote and support jazz in the state of Oklahoma,” Jackson said. “I get excited whenever there is an opportunity to do so.”

Jackson was born in New Orleans, and then he and his family moved to Tulsa when he was 5 years old. Still, his time in Louisiana had a huge impact on the rest of his career. Jackson was 4 years old when his mother took him to see a concert by a gospel saxophonist. The show grabbed hold of his imagination and never let go.

Jackson is excited about creating and recording new music again. He hopes when it’s completed, it will help set him apart and re-establish his name in the broader jazz community.

“It’s long overdue, and everyone has been asking me when the next project is coming out,” he said. “I take that as a compliment, and we’re looking forward to being able to release the project sometime in the summer.”

Eldredge Jackson at Jazz in June