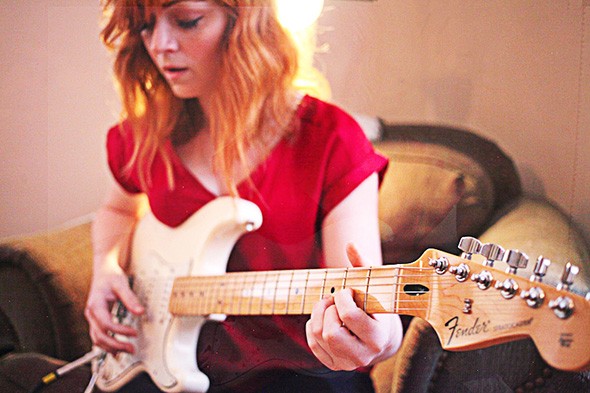 It was important to Kinsey Charles that the pictures in her new children’s book were frightening.

“I was like, ‘I want the monsters to still look scary,’” Charles recalled telling illustrator Natasha Alterici. “I don’t want them to be like, oh, once you see them in the light, they’re fine. I want things to look creepy. I want it to be scary because that’s what it is.’”

Charles reads her book The Girl Who Sang the Monsters to Sleep 7 p.m. Dec. 19 at The Paseo Plunge, 3010 Paseo St. The local first-time author, who has been releasing music both as a solo artist and as part of folk trio Judith for more than a decade, will also perform songs from her upcoming album. The book, published by Literati Press, includes a lullaby Charles sang to her daughter Davie.

“Even the lullaby is very minor-toned and creepy,” Charles said, “but it’s just talking about moonlight and stars and things that. It’s the lullaby that the mom sings to the daughter every night, and then the daughter starts wondering, ‘What are those things?’ because she hasn’t seen any of them because their village is so scared of the dark they leave the lights on all the time. So the kids have never seen stars or the moon. They just stay inside at night with all the lights on and the doors locked.”

The monsters have to be scary, Charles said, because children are scared of them. The power of honoring someone else’s reality, even when it’s frightening, was a lesson she learned while caring for her grandmother.

“We lived with my grandmother for the last two years of her life, and she had Alzheimer’s,” Charles said. “My sisters and my mom, we were all kind of taking turns making sure she was safe and supervised, and we’d take turns sleeping with her because she would get up a lot at night and hallucinate. My mom, being a little bit closer to her emotionally, had a lot of trouble. She would want to argue with her about reality. My grandma would see something scary that wasn’t our reality, but it was hers; that’s what her brain saw. And my mom would say, ‘No, that’s not there. That’s not real.’ And it would scare my grandma more. Then she would start to not trust the people taking care of her. She was like, ‘I see it. You’re telling me it’s not there, and that scares me more.’ … My sister who was a nurse at the time. … She told us, ‘What we need to do is just make her feel safe. Don’t argue with her. Don’t say what she’s seeing isn’t real.’ 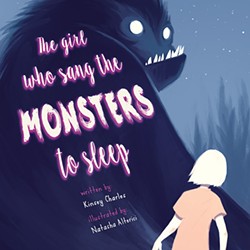 “One night, my sister was sleeping with her, and my grandma woke up and asked her, ‘Who is that man? Why is that man in our room, and why is he stealing our TV?’ And my sister said, ‘Oh, no, he’s not stealing our TV. He’s fixing it. It’s broken, and so we needed him to come fix it.’ And then it was like, ‘I see this man, and that’s scary in my room at night, but my granddaughter told me he’s here to fix it, so I don’t have to be scared.’ But then she was like, ‘Well, why does he have a gun?’ And my sister said, ‘Well, it’s scary for him to go to different people’s houses at night, and so that’s just in case someone tried to hurt him.’ She was just trying to be as creative as possible and make what she was seeing not scary, and so she went back to sleep.”

Charles, who now also works as a nurse, remembered the lesson working with patients and as a parent.

“When I had my daughter start to be afraid of the dark or monsters at night, I kind of used that tactic with her,” Charles said. “She would say, ‘There’s monsters in my closet,’ and instead of me saying, ‘No, there’s not. There’s no such thing as monsters.’ — because maybe her little brain saw those things, I don’t know. I remember seeing scary things when I was little that my imagination told me or I’d have vivid dreams — one night, I told her ‘Well, the thing is those monsters are really tired, and they don’t have their mommies to sing them lullabies, so they come here to hear a lullaby so they can go to sleep. So if you ever see monsters or are afraid of monsters, just sing them a lullaby so they can go to sleep.’ Over the next few nights and the next few months and the next few years, it turned into a story.”

Like the protagonist of her story, Charles originally began singing by herself in her bedroom.

"I want it to be scary
because that’s what it is."
—Kinsey Charles tweet this

“When I first started writing songs, it was definitely for me,” Charles said. “I was not planning on sharing those at all. I was, like, 15 years old, in my room. … I was kind of just writing what I knew, which was, you know, not a lot.”

The solo album she’s currently working on will be the follow-up to an EP she released in 2008.

“I remember at my album release party, I was about seven months pregnant, and I was playing guitar on my seven-months-pregnant belly,” Charles said. “I have pictures of that night, and I’m just large and in charge. And now I have a lot more life experience, and even the experiences that I don’t have I try to be aware of other people’s experiences. I do a lot of story stealing for my songs, like writing about a fictional character from a different perspective. I have a song about Eve from the Bible, from her perspective, people telling her she’s the reason that we’re in this mess in the first place because she tempted Adam. … It’s just a good exercise, I think, as a writer and just as a human being to think from someone else’s perspective.”

“Just because I know more about the world and I’ve experienced different heartaches and loss of loved ones and watched more news, for heaven’s sakes, there’s more sad stories to give a voice to,” Charles said. “I just want every single one of my songs and anything I do, really, whether that’s writing a children’s book or being a nurse or being a teacher, I want people to always be able to say that it was genuine, that it wasn’t put on, it wasn’t motivated by avarice or ill will. It’s just, this is my heart. This is what it feels like, and I’m hopeful. I think there’s a tone of hope, even in some of my darkest songs.”

Finding real hope in the darkness requires acknowledging the monsters, not ignoring them.

“It’s very important to validate people’s feelings and to comfort them,” Charles said. “Not just letting them spiral out of control with their feelings, but it helps them feel more comforted if they are understood. I mean, that’s just human nature.”

Admission is free; the book is $10. Visit literatipressok.com.