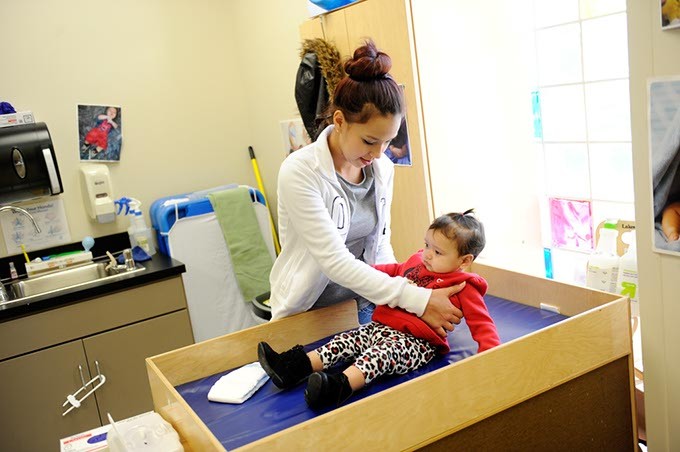 Like most teenagers, Priscilla Quintana wakes up each day not necessarily excited to go to school. She stares at the ceiling, wipes the sleep from her eyes and then quickly remembers why getting out of bed is so important.

With the help of her own mother, Quintana gets herself and Nayalee ready for the day and then heads to Emerson Alternative Education High School, one of Oklahoma City’s alternative schools that offers flexible schedules and an on-site daycare in an effort to help students facing a variety of challenges complete their high school degree.

“This is making the difference for me,” Quintana, a freshman, said about the unique schedule and resources offered at Emerson.

“You’d be shocked by the number of different situations these students face,” Principal Sherry Kishore said.

Some Emerson students live on their own, and most have jobs that make a traditional school schedule hard to follow. This school year, Emerson divided the day into two blocks, which allowed the school to offer two extra hours a day for students that attend both blocks, while also giving some students the chance to attend half a day and still earn credits.

Because of that schedule change, Emerson’s enrollment increased by over 115 from last year, when many   students were turned away because of space limits.

“We have such attendance issues,” Kishore said. “We thought this [new schedule] would help address some of those issues and allow us to help even more kids.”

In the past, some students would sneak away during lunch in order to make it to work on time or take care of their child. The half-day schedule gives students the option of attending classes in the morning or afternoon while still meeting obligations at home or work.

The new schedule also allows some students to earn credits faster, meaning they can catch up after missing school or graduate early.

“Here, it can be a lot faster,” said Samuel Jackson, an Emerson student. “It’s straight to the point and allows you to really focus on what you need in order to graduate.”

The state requires alternative education schools to offer at least four hours and 12 minutes of instruction a day. Emerson’s new schedule includes two blocks of four and a half hours each day. That schedule change has increased the school’s capacity from 275 to more than 388, and because the school fits four semesters into a school year, students have the chance to earn a eight more credits than they could at a traditional high school.

Increasing the number of openings for alternative students is important in Oklahoma City, as the demand has been greater than what’s available, Kishore said. The Oklahoma City Public School District saw nearly 1,300 alternative education referrals last year for all of its alternative schools, and around 300 students were turned away because of a lack of openings.

Kishore also said the new schedule has helped Emerson continue its transformation into a school that is more focused and an attractive option for some of the city’s students who have been dealt difficult life circumstances.

“In the past, Emerson has been where they sent kids to, but over the last two or three years, we have worked on changing the culture of the school,” Kishore said. “There has not been a week go by in the last two months where I haven’t had a kid call me and say they have been out of school for a year and ask what they need to do to get back on track.”

The new schedule has offered a chance for students like Quintana to catch up after taking time off during her pregnancy. The on-site daycare is another resource Quintana uses as she hopes to finish high school now that she has extra motivation.

“It’s scary [coming back to school], but I’m here to finish it,” Quintana said. “I want to get a good job because I know I didn’t get everything I wanted when I was little and I want my daughter to have everything she wants.”

If she is successful, Emerson will prove to have a lasting impact not only on her life but on the life of her daughter.

“What we do makes a difference,” Kishore said. “This schedule change means it’s making a difference for more students.”