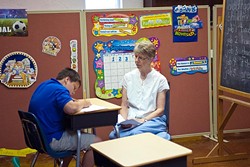 As a young boy clumsily reads aloud words from The Ugly Duckling, he gains confidence with each line. A teacher’s assistance is needed less with each new page, and the boy looks up with a wide smile when he reaches the end.

It’s a small yet significant moment at a school that is small itself yet is making an impact that could make a significant difference for generations to come.

Little Light Christian School is a tuition-free school for children of incarcerated parents. With the stark reality that children of parents in prison are 70 percent more likely to end up behind bars before the age of 25, offering those kids education, mentorship and structure at an early age could be the only shot they have at breaking the cycle.

“We want to break that intergenerational cycle of prison,” said Justin Jones, former director of the Oklahoma Department of Corrections and chairman of the board at Little Light. “These children start off with a pathway to prison, but education is the key.”

Robin Khoury, founder and principal of Little Light, said the seed for the school was planted almost 20 years ago.

“God had given me a vision a long time ago that someday I would have a school for poor kids,” Khoury said.

Over the next several years, Khoury home-schooled her own children and became involved in prison ministries.

“As I became an empty-nester, the vision for the school become more clear,” she said. “I was at a conference on women’s incarceration and they were talking about children of incarcerated mothers ... something overwhelmed me at that conference.”

In 2009, she incorporated Little Light Ministries and began working with women in prison. Three years later, the school was launched with six students, many of whom Khoury had come across at various camps she volunteered with that worked with children of incarcerated parents.

Housed in a church in northwest Oklahoma City, Little Light started the new school year with seven students of elementary school age. Students participate in regular academic classes that are often individualized, along with lessons in art, music and gardening. Life and coping skills are also part of the daily schedule.

“We build therapy into our day-to- day programs, and we also have a heavy dose of love and understanding,” Khoury said.

The school also provides a support system to caregivers and parents. It’s a relationship that motivates many families to keep their children in the school.

“We are a big support to their caregivers, and we always have our ear to the ground on what needs they might have,” Khoury said. “We are very tight with our students, and once they come here, they don’t want to leave. We had a student whose mom was considering a job in another town but reconsidered based on what her daughter would be losing.”

Besides the fact that many children of incarcerated parents struggle academically, there are many emotional issues that can be hard to address in a traditional school.

“The first thing these kids begin to experience is depression, and that leads to all types of problems with their school work,” Khoury said.

Many students struggle with anxiety, anger and fear and are often compared to victims of post-traumatic stress disorder.

“You take a child that is disenfranchised, has the stigma of a parent being incarcerated, and you put them in a public school system with overcrowded classrooms, and they struggle,” Jones said. “But here, they get very individualized attention, and I think it makes a big difference.”

Jones’ experience as director of corrections involved working with individuals who had already entered the prison system. But he had a chance to glimpse the impact that had on families.

“Watching the children [of inmates] during visitations and seeing how despondent they can be was eye-opening,” Jones said. “You can see a major difference with these children at Little Light.”

Jones said it’s too late to stem the tide of rising incarceration rates working within the prison system. Instead, the real impact is made in working with children who are statistically more likely to go to prison simply because of who their parents are and where they live.

“If we are ever really going to reduce the prison rate in Oklahoma, we have to shut off the supply,” Jones said. “The key is prevention as early as possible.”

Little Light hopes to expand by adding more grade levels in the coming years, which would also mean moving into a larger facility.

“We want to add a pre-school to feed our elementary school,” Khoury said. “We also want to add a year to the top side of the school to care for the older elementary students. We are planning on walking with those students to college or trade school. We plan to continue our individualized education as long as they need us and want us.”

Little Light hopes to offer its students an alternative path from the one they are statistically likely to travel. If successful, it could mean a real chance at freedom for the students.

By the numbers: Children of the incarcerated

• Nationally, there are more than 120,000 incarcerated mothers and 1.1 million incarcerated fathers who are parents with minor children (ages 0-17).*

Sources: - Between 1991 and 2007, parents held in state and federal prison increased by 79 percent.+ * Statistics from The Osborne Association + Statistics from the United States Department of Justice