School leaders debate the merits of a continuous school calendar

Following the lead of other urban school districts around the country, the Oklahoma City Public Schools Board of Education pushed forward on a plan to boost student learning by closing the achievement gap in 2010.

Revising the school calendar, leaders explained, was an academic improvement strategy. Simply put, shorter time away from school would increase retention rates. Student remediation would happen when it was most needed — during the school year — with mid-semester breaks offering learning interventions to at-risk students.

At the time, leaders of Oklahoma City Public Schools (OKCPS) described the approach to the calendar, called continuous learning, as visionary. The district was acting ahead of its time, and it was predicted other school systems would following the lead. A lot has changed since OKCPS began its continuous learning calendar during the 2011-12 school year.

Four different administrators have overseen the state’s largest school district, state academic standards varied from school year to school year, there was overhaul to create the district’s curriculum department and then a dwindling state budget mixed with loss of federal funds left the district with $30 million less to operate with.

Circumstances have changed, and with no clear indicators that student achievement increased over the past few years, a new set of district leaders will decide whether to continue with the current calendar, switch back to a traditional one or develop a blend of the two. 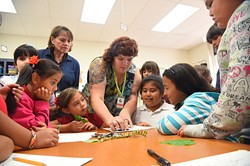 When Oklahoma City students began the school year Aug.1, it marked the sixth straight academic year on the continuous learning calendar. Under the approach, classes begin on the first Monday in August, followed by a two-week break in October and then a three-week break in December.

For the second half of the year, students are out for two weeks in March and end classes at the end of May for an eight-week summer break.

In many ways, OKCPS’ continuous learning calendar resembles the year-round school approach with a shorter summer break and days off added to traditional breaks, typically around holidays.

Ruth Veales, who represents the northeast section of Oklahoma City and Spencer, is the only board member who remains from the eight-person board that approved the calendar change six years ago.

Veales said members of the District 5 community advisory board advocated for the continuous learning calendar, which went into effect at District 5’s Rogers Middle School and Douglass Mid-High School four months before the December 2010 vote.

District leaders created the program to reach students at a variety of different levels, like struggling readers, English language learners and middle and high school students needing to catch up on algebraic equations.

As part of the voluntary program, principals and teachers approached parents to encourage student enrollment. Lack of interest and communication barriers prevented the district from reaching all poorly performing students.

“I think one of the biggest challenges we’ve had is actually getting the kids who need it the most to intersession,” said Lynn Barnes, executive director of pre-K-12 academics. “We do have a turnout, but typically, it is not the children who need it the most. We can’t force families to send certain students.”

In math and English, student achievement remains virtually unchanged over the past seven years, according to district data presented to the board during the Nov. 7 meeting. In science, student achievement has decreased drastically since 2012, two years before state lawmakers approved new science standards.

No indication of academic improvement in the data has cast doubts on intersession — not only its ability to reach students but in the quality of the program offered to students present. Veales said parents shared with her that their students were seated at a computer and received little instruction from a classroom teacher.

Board member Gloria Torres, who served as an OKCPS principal in 2010, said the calendar and intersession were never fully implemented and no solution was developed for ensuring at-risk students attended intersessions. If the board approved a continuous learning calendar for the upcoming school year, she questions if intersessions would be implemented as intended.

A switch to a traditional calendar eliminates opportunities for a program like intersession and teacher professional development during breaks. With school shut down longer during the summer months, OKCPS would see a savings of $525,000, according to a district estimate.

As the district continues to muddle through a tough financial year and another expected, financial savings have to be considered, said board member Bob Hammack.

“That’s a huge sum of money,” Hammack said. “How do I go to people and say, ‘We had a chance to save a half-million dollars from changing over to system A from system B; and system A is not doing what we hoped it would do in the first place.’ You better have really good reasons to say why you walked away from a half-million dollars.”

If OKCPS switched to a hybrid calendar model, the district could save close to $350,000.

Last month, in order to cut expenses, OKCPS did not offer intersession to students. Voluntary educator professional development was offered to the district’s 2,600 teachers during fall break. The district reports 805 teachers participated.

The program was also eliminated for winter break but will return for spring break.

Superintendent Aurora Lora is expected to deliver a calendar recommendation to the board during Monday’s meeting. Most recent state budget numbers will likely weigh heavily in the first-year superintendent’s recommendation.

Ultimately, it will be the board’s decision to continue with continuous learning or make a change.

At Monday’s Oklahoma City Public Schools Board of Education meeting, Superintendent Aurora Lora is expected to make a recommendation for one of the three calendar proposals. The board is expected to call the recommendation to a vote. The meeting begins at 5:30 p.m. at the administration building, 900 N. Klein Ave.