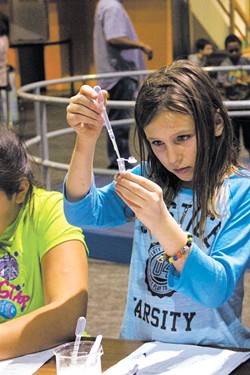 Science Museum Oklahoma’s Science Overnight series is intended to get children and young teenagers excited about science and engineering, but on its Star Wars-themed nights, there are plenty of parents as or more excited about the programming as the youngsters they bring along.

Clint Stone, director of education and training at Science Museum Oklahoma (SMO), said everyone who attends the event — including the chaperoning adults — will likely be a devoted fan of the world’s premiere science-fantasy film franchise.

“Everyone is so into it, no one is going to look twice if you’re acting like a kid and you’re 55 years old,” Stone said. “This is the perfect place to be curious and to try new things, especially when it involves Star Wars.”

A variety of science-based, Star Wars-inspired activities and demonstrations will keep all ages entertained during Star Wars Science Overnight, set to begin 7 p.m. Friday at SMO, 2020 Remington Place. Registration is $25-$45. Stone said those interested in attending should register before Friday afternoon at sciencemuseumok.org.

SMO has been hosting Science Overnight events for years, dating back to the days the facility was known as Omniplex Science Museum. Many school, scout and family groups have relished the opportunity to have the museum complex to themselves as they engage in science- and engineering-based programming. Children and accompanying adults can spend the night inside the museum if they choose, but those who prefer their own bed have the option to go home early, too. 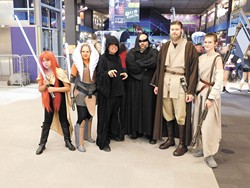 Many of SMO’s Science Overnight events are themed, and there is no more popular theme than its Star Wars nights. This year’s event comes just one week before the scheduled premiere of Star Wars: The Last Jedi on Dec. 15.

Stone said the SMO staff is as excited for the new movie as any of the fans attending its Science Overnight.

“When that first trailer [for The Last Jedi] came out, we all watched it like three times over and over,” he said. “Star Wars is just one of those things where we watch and we think, ‘Is that possible? What would that be like?’”

Those who attend will be able to construct their own miniature lightsabers and replicate the powers of The Force, such as the dreaded Force lightning attack, with science. Stone said the museum also hopes to connect the dots in children’s minds between things they see on the screen to the nearest real-world equivalent, like droids to robotics or carbonite freezing to cryogenics.

“We try to correlate what we do with what is happening now and what we can do that is informed or inspired by Star Wars in some way,” he said.

Stone said he has been a huge fan of the Star Wars franchise since his youth and is probably even more excited about the new movie than his son. Growing up, most of Stone’s toys were Star Wars-related. He has particularly fond memories of using basic engineering skills to construct Ewoklike traps and weapons to combat his Imperial walker toys.

A big part of Star Wars’ fandom has long been imagination and excitement. Harnessing that youthful enthusiasm can be a powerful tool for science education.

“Sure, they’re out in outer space and they’re having these big adventures, but even as a kid, you can play along,” Stone said.

The Science Overnight events are all about finding a good entry point to getting young minds excited about science and learning, even if they are not aware of it at the time. Stone said an environment in which one will be totally immersed in science and Star Wars fandom is an ideal place to spark new ideas.

“There’s this wonderful thing that happens when you’re just a little out of the normal,” he said. “When things are just a little bit different than they normally are, our minds are so open to these new experiences and what we learn. We make these memories, and Science Overnight is a great way to make those memories.”