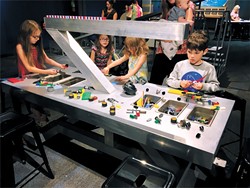 Think about Thomas Edison’s first lightbulb. It didn’t work. Neither did the supposedly hundreds of experiments that followed it, but Edison continued to experiment. Persistence and creativity are two hallmarks of scientific experimentation, and a new exhibit at Science Museum Oklahoma puts these attributes front and center.

Kid Inventor runs at the museum, 2020 Remington Place, until March. Featuring three areas — design, build and test — the exhibit allows children and their parents to experiment and implement their creative ideas.

What the exhibit doesn’t feature, though, are overtly descriptive instructions on how to use the space or the materials in it. There are very few signs in the exhibit, according to Eileen Castle, director of Oklahoma Museum Network, which designed Kid Inventor.

“We want them to take the materials and go from one end to the other, building whatever they want to,” Castle said of the exhibit’s open-ended nature. “It’s a chance for primarily kids, but all ages, to get an experience of what the engineering and design process is and just use their imagination and create new and different things.”

Kid inventors who attend the exhibit can practice designing in a variety of ways. Castle said the exhibit includes computers for coding or designing a game system, 3-D sculpting and a space for experimenting with electronic sounds and music. There is also a workstation to draw out designs, Castle said.

The exhibit includes a wide variety of tools, including paper, straws, Legos and large-scale blocks.

“We have all sorts of materials you can build with, and once you build in all those areas, then we have areas where you can test,” Castle said. “We want people to use a wind tube in as many different ways as they can. We don’t want it to have one purpose.”

The testing area includes wind tubes, an airstream table, a shake table and a raceway, Castle said. By focusing on the comprehensive design process, the exhibit draws on the museum’s philosophy of “tinkering.”

“Tinkering or making is taking an idea that you have or taking something that already exists,” Castle said, “and changing it, making it better, coming up with a completely different application for it.”

Castle said the exhibit also shows kids that they can push themselves beyond their comfort zones as inventors and that this experimentation might lead to an even better creation. By testing what they’ve built, kid inventors will also have the opportunity to think about failure as a positive mechanism built into the scientific process.

“Failure is not a bad thing. In inventing, it’s actually oftentimes a way to make things even better,” Castle said.

With its focus on kid inventors’ independence and autonomy, the exhibit aims to spark creativity on both individual and collective levels. Castle said Kid Inventor was designed so an individual child would be able to design whatever she or he wanted but the space could also be reoriented for families.

“I think it’s a really wonderful chance to experience design with your families,” Castle said. “It’s a chance for parents and children to work on an equal playing field, as opposed to parents telling their child how to do something.”

The exhibit also features tools, design technology and testing elements that are not always available at home or school, which makes it a unique, open and tactile environment for trying new things, Castle said.

Kid Inventor shows that creativity is not a one-time event, but rather a process of trial and error, of creation and revision. The exhibit, from its title to its application, demonstrates that “kid” and “inventor” are not disparate concepts, but rather symbiotic, a scientific application of creativity.

“The idea is for them to design something, to build it, to test it, re-design it and just go back and forth until they get products that they like,” Castle said.