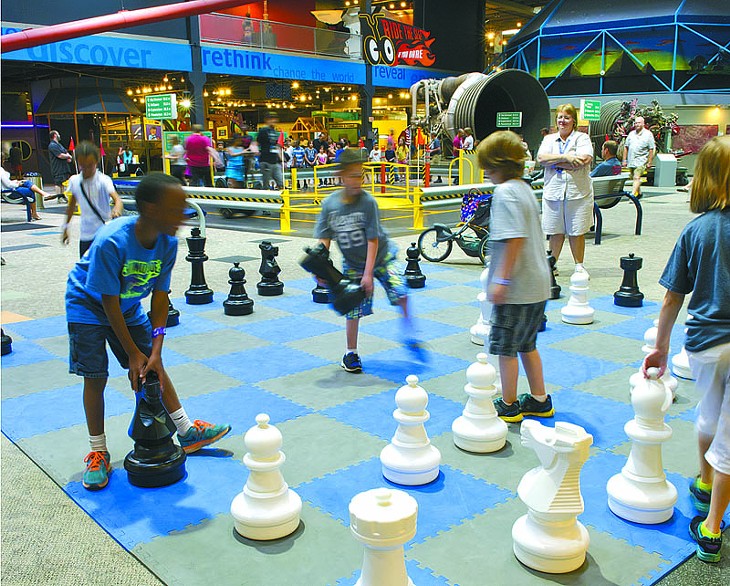 Like all people with a passion, he got caught up in it.

“Because this place has such potential, it has really kept my interest and all of a sudden — bang — 10 years have passed,” he said.

Otto’s work has paid off measurably.

“The museum was the vision of John Kirkpatrick. He had a vision of Oklahoma having a great science museum, a place where children and their families could learn about science and how it related to the arts, specifically,” Otto said.

The Kirkpatrick family and its foundation are known for a legacy of philanthropy, especially in the arts and sciences. Oklahoma Science and Arts Foundation (OSAF), established in 1958, was the precursor to the Kirkpatrick Center and the Omniplex, later renamed Science Museum Oklahoma.

Otto, who took over in 2005, wanted to remain true to the vision of its founder while bringing new ideas to the table.

He started with the name change, which remains a point of contention with some Oklahoma City residents.

Otto said he’s not that concerned about what people call the science museum in private conversation; he just wants people to put names aside and visit.

“When I was appointed as director, we began to rethink what we were bringing in as far as new things to recapitalize on the facility and the exhibits to turn it into a world-class museum,” he said.

Otto is the first to admit that it couldn’t have happened without the generous support of the people of Oklahoma. Benefactors noticed his constant efforts to improve the museum and build on its mission statement: “Changing lives by revealing the wonder of science.”

The museum recently received a grant from the Donald W. Reynolds Foundation, based on the museum taking the lead on the founding of The Oklahoma Museum Network. The network is a cooperative offive museums in Oklahoma, including Leonardo’s Children’s Museum in Enid and Jasmine Moran Children’s Museum in Seminole. SMO works with these museums to bring interactive, learning-based children’s exhibits to rural Oklahoma. The network also helps with teacher education so they can be more equipped to teach core science to grade-school children.

The network idea meshed nicely with the Reynolds Foundation’s belief in spreading science education across the state. The foundation encouraged SMO to apply for a grant for further improvements. The museum received a $12 million capital grant for timely updates to its collection and appearance.

Thanks to this grant, SMO is now in the midst of an initiative that will move the museum’s entrance toward the middle of the admittedly warehouselike building.

“John (Kirkpatrick) left us a great old building. It’s flexible but not much to look at,” Otto said.

The plans also include a new 21,000-square-foot exhibit devoted to core sciences. The exhibit will be mostly geared toward children age 3-6, but there will be something for everyone. The exhibit will be a village with nine unusual buildings, each devoted to a core scientific principle. According to Otto, they will be interactive in a way that previous exhibits were not and will encourage children to play.

There will be a water environment, a cave environment and a human physiology element that teaches children about their bodies and how they work.

The exhibit will also have information for parents, older siblings and grandparents, giving them tools to teach while having fun.

“STEM (science, technology, engineering and mathematics) education is so vital for the future health of this state. And what better place to get younger kids thinking that science is pretty cool?” Otto said. “It’s shown that if you don’t get children really active and interested in science by the third or fourth grade, you’ve lost them.”

The new exhibit and the entrance will be open by late May 2015.

This year, the museum also won the coveted ONE Award from Oklahoma Center for Nonprofits. Each year, the center chooses several nonprofits across the state for awards acknowledging service to the people of Oklahoma.

SMO won first place in the

Open Services category against other finalists including Up With Trees, a Tulsa nonprofit, and The Tulsa Hub, a cycling and education organization. In addition to the prestige garnered with such an award, the prize also included $7,500 in cash. Honorees were chosen independently of both the center and the nonprofits involved. The committee who made the nominations and selection of winners was literally a jury of nonprofit peers.

“To be chosen by your peers shows that we are doing something that’s working, and [the recognition] inspires us to do the best work we can all the time,” Otto said. “It does get our creative juices flowing.”

If you haven’t recently visited SMO, you are in for quite a surprise. Gone are most of the exhibits you remember from younger days. There are a wealth of new exhibits in the “permanent” collection that rotate every five years or so. That is just the tip of the iceberg.

The museum also offers a wealth of ongoing, dynamic programs so youth can get engaged in science in a way that leaves the classroom miles away. Science Live — a science-based performance unlike anything ever seen in a classroom — is an explosive good time. The museum also offers daily shows in Dome Theater, and you can learn all about the wonders of astronomy in the planetarium.

Summer camps for kids start in June and run through July. Each camp lasts a week, and no two are the same.

“What we try to do is make learning enjoyable and fun in an environment that will inspire you to pursue an area you might have never considered,” Otto said. “This museum gives me a chance to help people have a better life.”

Kids of all ages can have fun in the Adventure District

This summer is a perfect chance to explore the city’s attractions. There are a wealth of things to do and see in OKC’s Adventure District.

For any little cowboy or cowgirl, you can’t get much more up close and personal than this. The museum houses one of the most complete collections devoted to the art, culture and history of the American West. With a vast collection of visual art, clothing and artifacts, there is plenty of fuel for the imaginations of visitors young and old.

Take a trip through softball history and learn all about its legacy. The museum was renovated recently with displays that highlight the players who had exceptional careers and made significant contributions to the sport. It is also the site of the yearly Women’s College World Series.

If you haven’t made a trip to the zoo recently, you owe it to yourself. It has undergone big changes in the past few years and now is one of the top zoos in the nation. The 110-acre park is home to Asian elephants Asha, Chandra, Rex and baby Malee. Asha is expecting a new baby in December. Wander through the beautifully landscaped Cat Forest to spy a tiger through the bamboo, or check out the life aquatic with the newly opened Stingray Bay.

Feeling lucky? For a chance to win big money, you could do worse than spending a day with the ponies. Get in touch with your inner wise guy and maybe make it rain. Are slot machines more your style? There is also an indoor casino with more than 750 gaming machines. Local favorite Bricktown Brewery is housed right inside with a great view of the track.