Annie Bewley and her education team at Science Museum Oklahoma operate by one simple motto: When school is out, science is in.

That means when winter break starts later this month, Oklahoma City’s 350,000 square-foot hands-on museum will once again serve as a place for learning outside the classroom.

“It’s educational, but it’s also a lot of fun to come to the museum while they’re not in school,” said Bewley, who is in her fourth year as Science Museum Oklahoma’s museum educator. “They can keep learning whether or not they know it. We don’t try to hide it from them, but they’re having so much fun doing some of these activities that they don’t realize they are learning.”

Science Museum Oklahoma offers six camps during December, three Dec. 21-22 and three more Dec. 27-29. They are broken down into three age groups — Early Explorers (pre-K and kindergarten), Explorers (grades 1-3) and Innovators (grades 4-6) — and range from half-day camps experimenting with ice and snow and exploring senses to full-day sessions learning why animals hibernate along with creating and solving problems using chemistry, engineering and physics. 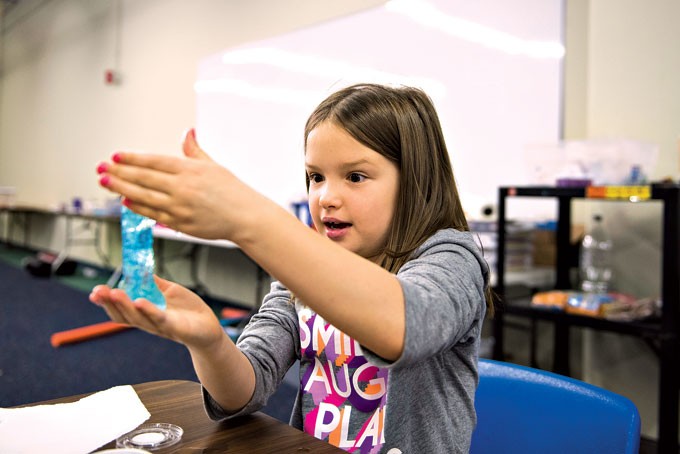 A chance to flourish

During the holiday season when learning might be the least of its worries, Science Museum Oklahoma continually challenges itself to foster learning for children interested in the sciences, and it does so in a different way.

“[The camps] offer a chance for inquiry-based learning and informal education, which both of those are hands on and participation-based rather than sitting in a chair in school,” Bewley said. “It gives kids a chance to flourish that maybe aren’t great test takers. There’s a lot less stress.”

There aren’t any tests in this environment. Campers spend some time in chairs. The rest is allocated to viewing museum exhibits while mixing in hands-on learning.

Class sizes are kept to 15 campers per session with two teachers plus additional volunteers serving as group leaders.

Bewley said she is most looking forward to the feedback on Participate & Hibernate, a two-day camp for children in grades 1-3. SMO has an in-house animal expert designing a program to teach campers the difference between dormant and hibernating animals.

The cold weather-based camp coincides with another winter-centric session called Let it Snow!, a camp for children age 4-5 interested in making their own snow and learning how ice melts. They’ll also test whether marshmallows make suitable snowballs.

Let it Snow! is one of two camps in the Early Explorers series started in the fall for pre-K and kindergarten students. The other half-day session is Oh, My Senses!, which focuses on what you can see, feel, hear and smell. Additional camps include Gold Rush; Mix It, Build It, Throw It; and Camp Chemistry. Participation is $45-$135.

In addition to the winter activities, Science Museum Oklahoma holds camps during fall break and summer vacation. Bewley’s goal is to avoid any repeats and keep the themes fresh.

The six camps this winter are either brand-new or spawned from a previous idea. For example, the idea for Gold Rush came this past fall from a camper.

SMO bounced the idea off other campers and staff members before deciding to go through with it. The two-day camp is for a slightly older audience (grades 4-6) and deals with mining, panning and excavation. Campers get to break into geodes, create crystals and dabble in an excavation site.

“We’re hoping that one is a big hit,” said Bewley, who noted it has already become the camp most children are interested in.

The museum has repeat campers, so new and innovative ideas are key to keep them interested.

Bewley said SMO conducts research and development and discusses potential ideas with museums around the country in order to decide which themes might work.

“A few of us who work here will try it out ourselves and pull in a few guinea pig children to see if they are having a great time and learning something and are they exploring something they haven’t had a chance to,” she said. “If we’re having fun, hopefully the kids will have fun, too.”

Let it Snow! (pre-K and kindergarten)

Oh, My Senses! (pre-K and kindergarten)