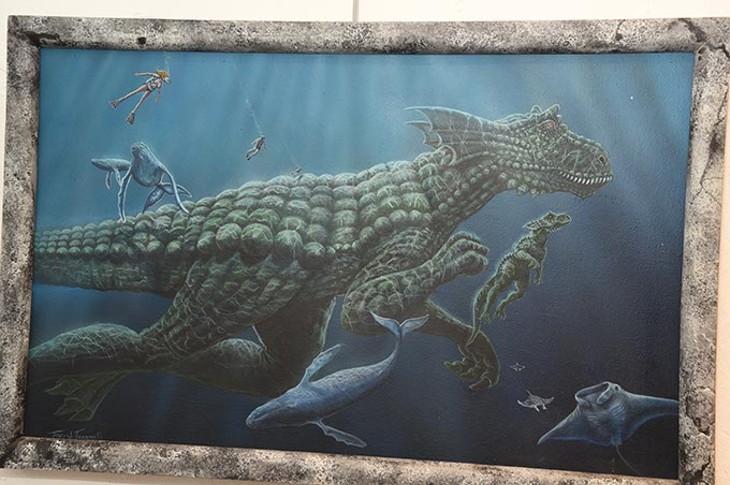 Local artist Tony Trammell met the late, great Ray Bradbury at a sci-fi convention. Fortunately, the circumstances of the meeting would not dictate his art career.

“I ran him over,” Trammell said. “He was late to give a speech, and we turned a corner at the same time, going different directions. I knocked him all the way to the floor. I was so embarrassed.”

Meeting one of your idols is daunting for any artist, but to literally knock one over is the stuff of nervous daydreams. Trammell, now 63 years old, said Bradbury was kind and understanding.

“The sci-fi conventions were where I met my idols,” Trammell said. “The conventions opened doors for me professionally.”

Trammell is a postman, and his route in Oklahoma City takes him by the house of Dustin Oswald, owner of Bombs Away Art and fellow artist. Oswald also owns Planet Dorshak Gallery in the Paseo Arts District, and after meeting and speaking with Trammell, he agreed to feature his letter carrier’s work at Planet Dorshak.

In addition to the original art, which will be on display through the end of the month, the gallery collaborated with Trammell on prints of his work.

Those will be available even after the show closes and include the first in the series, a Godzilla painting. In the piece, Godzilla is towering over a burning city while characters drawn in almost comedic fashion watch from rooftops.

Godzilla is one of many so-called kaiju monsters, a subject of many Japanese films. For many people around the world, Godzilla and other monsters became pop art icons thanks to the kaiju films. 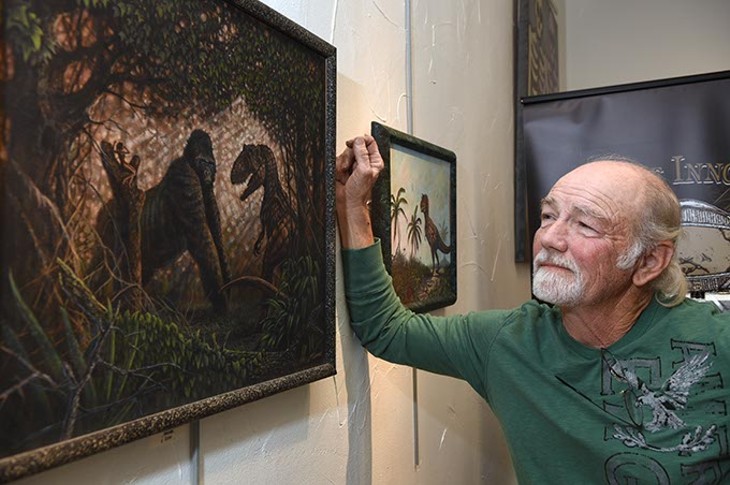 Charles Martin, an author and artist who works at Planet Dorshak and owns Literati Press, said Trammell’s work is devoid of cynicism.

“Tony captures what I really love about pop art: the appreciation of our cultural icons without the cynicism often tacked on in an effort to seem clever,” Martin said. “He heralds the beauty of the kaiju monster movies of Japan, re-imagining these creatures of destruction into noble beasts.”

Trammell admits to being a “closet sci-fi artist” early in his career.

He focused on landscapes because he believed people were not interested in sci-fi and fantasy art. While some of Trammell’s work is certainly of the animated or cartoon variety, much of his painting borders on fantastic realism.

Dinosaurs and monsters are juxtaposed with modern cityscapes, not in a comic book style but more in a “this could be happening right now” kind of way.

Martin described Trammell’s approach as attempting to present the monsters in such a way that they are just as of this Earth as we are, despite their sizes.

“These are our modern-day dragons, just as symbolic and complex,” Martin said.

Trammell’s art career has covered more than three decades. He has three grown children and seven grandchildren. He also was a painter in the Air Force for a time, the kind who paints buildings, not canvases.

In his career, he has illustrated books, comics and magazines and has even created a few puzzles.

He estimates he has painted more than 300 pieces in his life, and he has sold many of those pieces. Trammell will sign any of his work that is purchased from Planet Dorshak.

Print headline: Art of science, For over 30 years, this local postal worker has painted science fiction art and knocked over a few of his idols in the process