The week before Thanksgiving, Steve’s Greens Cannabis + Wellness was burglarized and then torched. 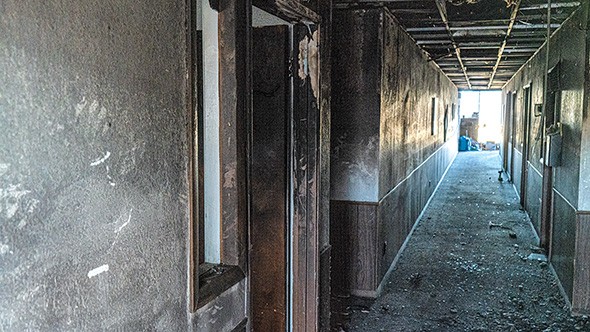 To say the weekend before Thanksgiving was a rough one for Steve’s Greens Cannabis + Wellness would be one hell of an understatement.

Early Nov. 24, owners Stephanie and Dustin Mathis were awakened by their alarm company about a burglary at their cannabis dispensary, 6715 N. May Ave. Stephanie Mathis said one of the accused burglars was arrested while still inside the building and the second apprehended later that night.

Two days later, they were alerted in the middle of the night again, this time to reports that their business was on fire.

A makeshift incendiary device, thought to be akin to a “Molotov cocktail,” or a glass bottle filled with flammable liquid using a paper or fabric wick, was thrown through a rear window on the south side of the building.

“It was actually the counseling office that they threw it into, because my store doesn’t go all the way to the back of the building. There’s counseling offices behind us,” Stephanie Mathis said.

The room where the blaze started is used as a playroom for children.

Flames tore through the rear of the building before they were halted by firefighters, causing extensive smoke and water damage to the front of the building that houses not only Steve’s Greens but their other business, SB Body Arts.

The names of the suspected arsonists have not been released and no arrests had been made by press time.

Because she did not want to compromise the investigations into the burglary or arson, Mathis declined to speak on the record about the sequence of events between the two incidents, but there are reasons to believe that both are connected.

A damage estimate was not available, but Mathis said almost all of the contents of both businesses were lost in the fire.

“The smoke just got so bad in SB Body Arts and in Steve’s that both sides are just going to have to completely be gutted,” she said.

What initially was thought to be monthlong hiatus will likely now take half a year to repair.

And just like that, the businesses that Dustin and Stephanie Mathis built with a small but dedicated group of employees went up in flames.

To make matters worse, they had just gotten all of their relevant business paperwork up to speed.

“The smoke just got so bad in SB Body Arts and in Steve’s that both sides are just going to have to completely be gutted.”
—Stephanie Mathis tweet this

“I literally got my renewal for the dispensary the day after the fire. All the money I spent on the certificate of compliance, on the renewal thing, on the new [Oklahoma Bureau of Narcotics and Dangerous Drugs Control license] … Even if we did move locations or whatever, we would have to go through that whole process again, and I just spent all that money,” Mathis said.

She said that the insurance company is still doing their part.

“Since the cannabis side is all specialty insurance, it does have a cap. I had my insurance kind of set up like if we were going to get robbed and we would have to fix up the store, not if our place got, like, firebombed, and we lost every single thing in it. So my insurance policy pretty much covered like pretty minimal property damage, like covered doors and windows and then covered whatever product I had in the store, so at least I have that, but it’s not a full Farmer’s policy like the tattoo shop has,” Mathis said. “This has gone past just being like a simple burglary that I’m going to get an insurance check for to fix the windows and reimburse me for some product. This is now my entire fucking livelihood on both businesses and my whole staff and everybody else. At least my tattoo artists have places to go, but everybody else is on payroll. They’re just fucked, and being a small business, we don’t have like massive fucking savings accounts. … Everybody thinks you’re raking in the big bucks because you’re a cannabis dispensary.”

It was not as if Steve’s had not prepared.

“I had a lot of different security measures in place, and I feel like my security measures that I had in place is what got these guys caught because I had an alarm system. I had a camera system. I had different measures. I had a steel door on my front,” she said. “They spent 10 minutes in my fucking hallway trying to figure out what to do before they actually got into my store.” 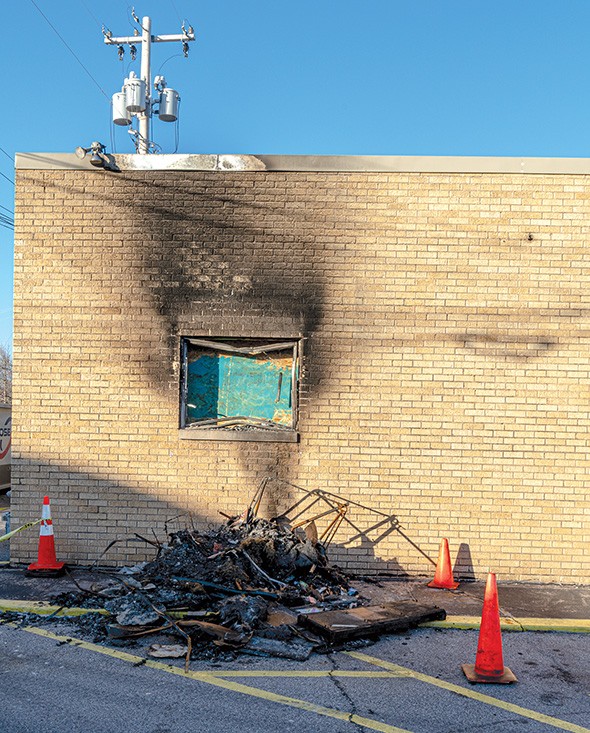 The holiday impeded efforts to both assess the damage and investigate the crimes that have occurred at their business, so for now, almost everything is still up in the air.

What Mathis does know is that SB Body Arts, which has been the couple’s bread and butter for the past seven years, will be rebuilt first.

In the meantime, Dustin Mathis and the other piercers and tattoo artists are going to have to find temporary homes where they can practice their art. The budtenders at Steve’s Greens have all begun searching for jobs.

While they have put countless hours building the Steve’s Greens brand, Mathis worries that its absence from the market during a critical time during the cannabis boom in Oklahoma could put a dent in its patronage once it reopens its doors.

This setback comes after another setback on the cultivation arm of their company, Green Seed Farm, which recently relocated to a new, larger space where grow rooms were built instead of using their previous tent system. Now that the plants are growing once again, the retail side has been put out of commission. Stephanie Mathis said they are considering moving their processing license to their farm so they can put out products while Steve’s Greens is being rebuilt.

While there has been an outpouring of support from the cannabis community, there are still no solid plans for a benefit event.

Those who wish to help displaced employees make it through the rest of the holiday season can donate through a GoFundMe page that can be found on Steve’s Greens’ Facebook page.