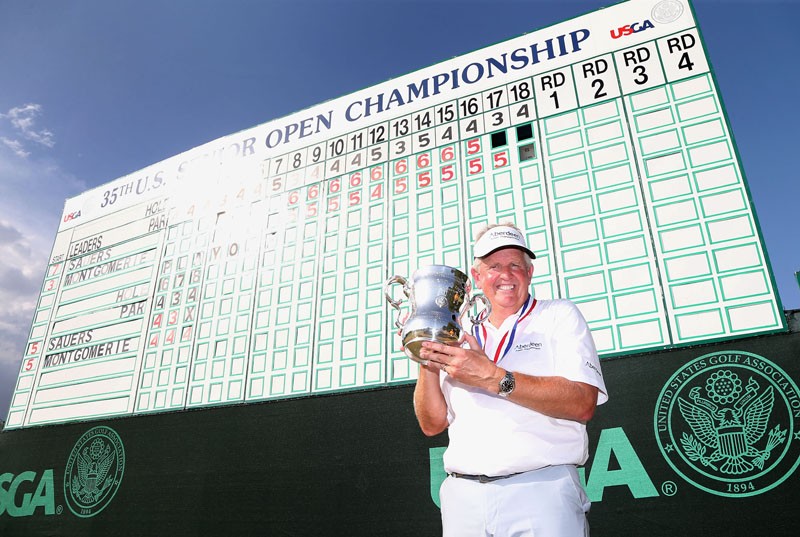 After rolling home a 16-footer to win the 2014 U.S. Senior Open Sunday at Oak Tree National, Colin Montgomerie thrust his hands in the air as a grin flashed across his face. The 51-year-old Scotsman defeated four-time PGA Tour winner Gene Sauers in a playoff to claim his second senior major this year.

The par putt on the par-4, 450-yard final hole sealed the one-shot playoff win for Montgomerie, who hugged his wife and daughters after only his second 72-hole professional victory on American soil — he also won the Senior PGA Championship in May.

Montgomerie trailed Sauers by four shots entering Sunday’s final round, tying the third-best comeback by a winner in the final round. After scorching the 7,219-yard, par-71 Oak Tree National for a 6-under 65 during the first round Thursday, Montgomerie hung on with an even- par 71 on Friday and struggled to a 3-over 74 on Saturday.

While most of the leaders came back to the field on Sunday, Montgomerie shot a 2-under 69 to catch Sauers, who shot a 2-over 73, lipping out a birdie putt on the 72nd hole that would have won the championship. Montgomerie played one shot better than Sauers during the three-hole aggregate playoff, the first playoff since 2002 in the U.S. Senior Open.

With the victory, Montgomerie finally completed a 22-year quest to win a United States Golf Association event. He finished as the runner- up three times in three U.S. Open Championships (1994, 1997 and 2006).

As advertised, scoring at Oak Tree National proved difficult. After rain early on Thursday, soaring temperatures and high winds made the course fast and firm for the weekend. Montgomerie said he would tell everyone in Great Britain about the course’s potential to host future majors.

“You should be very proud of having something so good, so local, a world-renowned golf course,” he said.

Oak Tree member Bob Tway left disappointed, finishing the tournament tied for 43rd place at 10-over par. However, the 1986 PGA champion said his home course could absolutely host another major like a U.S. Open, particularly for its abundant space for corporate hospitality tents and parking rather than its capacity to hold large numbers of spectators. Total attendance for the tournament week was 107,217.

Fellow Oak Tree member Willie Wood tied for 49th place at 13-over par. After his final round, Wood said the course might be a good fit for the PGA Tour Championship or a similar FedEx Cup playoff event.

“I don’t think it’s going to be the last event here,” Wood said. “The golf course won this week.”