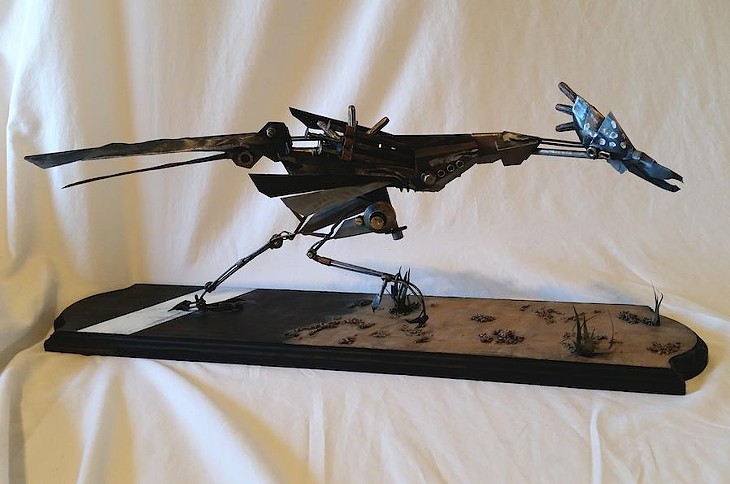 Most of the artwork displayed in the world has to suffer the indignity of watching the vast majority of human beings walk right past it, day after day, year after year.

Different work speaks to people for a variety of reasons, of course, but admit it — most of the paintings and sculptures you see at street fairs, arts festivals, restaurants and bank lobbies tend to blend themselves into one big, amorphous piece of art in your brain. Like any other undertaking, art doesn’t only produce brilliance. Sometimes it’s not worth remembering. Sometimes it can be boring and easy to ignore.

Joshua Cook’s work isn’t easy to ignore. Even if it’s something you think you’d never have in your home, you will notice it. You’ll probably even linger in front of it for a few seconds and mention it to whomever you’re with. You might even buy it.

A collection of it is now on display at CMG Art Gallery, 1104 NW 30th St. A steampunk menagerie of dinosaurs, lizards, insects and anglerfish constructed from refuse found in the world’s recycling bin, Cook’s sculptures almost always guarantee a second or third look.

“A lot of it is made from soda can metal, and I also go to garage sales and find old printers, typewriters, anything I can tear apart and make into something else,” said Cook, a 24-year-old Yukon native. “They’re basically steampunk aesthetic animals, like animals plated with armor.”

The bolts on the animals’ joints are reminiscent of old GI Joe action figures, and when Cook adds lights to the inside of the sculptures, the movement created by the jutting angles and sliced shadows is especially anthropomorphic.

“I also really try to make it look like they could be moving, which is why there are joints and plates and sections to most of them,” he said. “So even if they’re not made to move, it looks like they could on their own.”

An anglerfish that doubles as a desk lamp looks so sentient and menacing that one hesitates to reach out and touch its teeth.

Cook, who works full-time as an emergency room scribe, said the sculptures have become his primarily artistic discipline.

“I used to draw a lot more,” Cook said. “I’ve just become so focused on the sculpture thing that it’s primarily what I do now.”

The aforementioned angler fish is the sixth one he has sold — all of them are different; Cook doesn’t make duplicates — and he has enjoyed some success at comic-con shows from Chicago to New Orleans.

He has only been making these metal beasts for a few years and has refined his process in several ways.

“For starters, they’re way sturdier now than they used to be,” Cook said. “I especially learned that when I started having to transport them everywhere. I’d have to judge it not just on how it looked, but on whether or not it would survive the trip.”

He also said his painting skills have grown by leaps and bounds. After bolting the sculpture together, Cook has perfected a painting technique that adds a faux patina to the finished pieces, giving them a bronzed, aged look. He had a booth at the Paseo Arts Festival for the last two years and showed in the Blue Dome Arts Festival in Tulsa, but he’s a relative newcomer to the Oklahoma City art scene. He’s also admittedly not a self-promoter, so it’s probably more likely that you’ll recognize his work rather than his name.

“I guess that would be ideal,” Cook said when asked if becoming a full-time artist is a goal. “But I just want to keep getting better at what I do, and we’ll see what happens.”