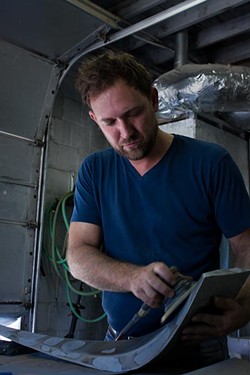 The last year or so in sculptor Morgan Robinson’s life has been at once both leisurely and hectic.

The artist, carpenter and designer is splitting time between Oklahoma and Japan. Most of Morgan’s time is spent at peace, crafting his nature-inspired sculptures and wall ornaments at his own pace in his Stillwater-based studio. He is also part of Oklahoma State University’s art department faculty.

Yet simultaneously, a personally unprecedented list of work- and family-related international travel demands have him feeling pressed for time.

In addition to installing his work in galleries across the United States and overseas, Robinson tries to see his Japan-dwelling wife and daughter whenever he can.

Robinson was fascinated by natural forms and movement from a young age. Things like eyebrows, clouds and insects, in addition to the shapes of mouths and shadows, captured his imagination.

Still, it did not take long for Robinson to realize these topics had no place in conversation with his friends. He learned to bottle up his interest for the time being.

Robinson eventually earned a baseball scholarship to Ada’s East Central University, where he took his first art class. He took great joy in the chance to creatively express himself.

“There was finally an outlet for this stuff I had bottled up inside me,” he said.

He began to lose interest in baseball as he became more invested in his new hobby making beaded necklaces. He decided to leave Ada and transfer to the University of Central Oklahoma (UCO) for the school’s jewelry program.

While at UCO, Robinson’s attention slowly began to shift from jewelry to sculpture. He graduated with an art degree in 2002. Like recent graduates in many other creative fields, he was not sure how to apply his skills toward a career.

Robinson found the direction he was searching for after meeting one of his father’s business associates, an Australian entrepreneur named Stefan Broinowski. However, it was not what he was expecting.

Broinowski was an eccentric businessman with a diverse set of interests. Robinson was confident in his art and sculptural abilities but knew nothing about how to make his work profitable. After the two became friends, he asked Broinowski if he could become his apprentice.

The businessman agreed, but under the condition that Robinson first agree to drop everything he was doing and live a year in the Australian Outback. Eventually (and some would say amazingly), Robinson agreed, selling his car and possessions to make money for the trip.

“He wanted me to basically go out and become undistracted and really figure out what I wanted to do and if I wanted to really be his apprentice or if I wanted to do something else,” Robinson said. “He saw it as a prime time in my life to really answer this question and to choose the direction I really wanted to go.”

Robinson lived in the remote South West Queensland region with little to do but reflect on his life and what he wanted from it. Broinowski’s hypothesis all along was that Robinson did not actually want to be his apprentice as much as he wanted clarity.

“He ended up being right, as if he needed any more ego,” Robinson said.

The artist’s time in the Outback left him with a new appreciation for meditation and minimalism. He soon became aware that they were also important aspects of Japanese culture and became intent on visiting the country. He spent two years learning the language and traveled to Tokyo, where he found a job making furniture in a studio of Japanese carpenters.

Robinson gained an understanding and appreciation for traditional Japanese woodworking techniques during his year across the Pacific Ocean — techniques he still incorporates in his work today.

The artist also met his wife during that year in Japan. The country has become an important part of his life and work. He spent the winter months with his family in Japan while also visiting some local galleries. Robinson recently returned from a two-week business and family trip to Tokyo.

Robinson has a lot to keep up with these days, both personally and professionally. The demands, at times, have pushed him to emotional limits.

“It’s been really tricky to try and balance all of that,” he said.

But if there is one thing the artist has learned in his life, it is how calmness and reflection always lead to discovery.