Lyric Theatre’s Broadway & Brew moves to the Boathouse District for its sixth year. 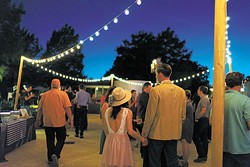 Lyric Theatre of Oklahoma’s annual Broadway & Brew event is set to return for its sixth year with a format that will feel familiar for those who have been to past editions of the fundraiser aimed at young professionals.

“It’s nice, and hopefully the weather will cooperate,” said Broadway & Brew event chair Brent Moss. “In past years, it’s been a fun night out.”

While the successful formula of local food plus local beer with live musical entertainment from Lyric Theatre is the same, a few things have changed, including the location. Broadway & Brew is 7-11 p.m. May 4 at McClendon Whitewater Center, 800 Riversport Drive. The event was held at Myriad Botanical Gardens for the past five years.

Moss said the location change came out of the committee’s desire to change things up and keep the event fresh. The Boathouse District is a newer area of the city, and the event’s planning committee wanted to highlight a new area of Oklahoma City.

“The city’s growing and changing, and I think that our event should grow and change with it,” he said.

Lyric Theatre’s Broadway Ball is its largest annual fundraiser, but Broadway & Brew also plays a major role in raising money for the professional theater company. Tickets are $75 and can be purchased either through the Lyric box office or online at broadwayandbrew.com. VIP packages starting at $250 are also available. Those packages include two tickets and access to a VIP area with a full bar.

In addition to raising funds for Lyric, the event is also an official kickoff of the theater’s summer programming at Civic Center Music Hall. This summer, Lyric will present the musicals Disney’s Freaky Friday (which opens June 26); Hello, Dolly! (July 10); and Mamma Mia! (July 24).

In a special preview program, Lyric cast members will perform songs from the shows for those who attend.

“They’re always usually songs that people know and love,” he said. “They’re usually capped off with some audience participation, singing along and having a good time.”

“The committee is pretty excited because most of those restaurants haven’t joined us in the past,” Moss said. “It’s kind of continuing our theme of shaking things up a little bit.”

Those who attend the event will also have a chance to win a variety of gift packages through Broadway & Brew’s prize raffle. Prize packages are provided by the Oklahoma City Thunder, Kendra Scott, Topgolf, Schlegel Bicycles, Tower Theatre and more.

"The city’s growing and changing, and I think that our event should grow and change with it." — Brent Moss tweet this

Years ago, Lyric Theatre put together a young professionals group that it later tasked with developing a less formal fundraising event than Broadway Ball with a special focus on attracting a younger crowd.

That group held the first edition of Broadway & Brew six years ago. It was on a smaller scale than what the event has become now but was still successful.

Moss said while Lyric’s young professionals group has informally dissolved over time, many of the people in that group are still involved on the Broadway & Brew planning committee.

“The spirit of that group lives on through this,” he said, “and over the years, it’s grown and grown.”

This is Moss’ first year as chair of the Broadway & Brew event, but it is his fifth overall year on the planning committee. Every year, he gets an email asking if he would like to be a part of the team, and he has never had a reason not to commit.

“Those kids that go to the academy then end up in Lyric shows years later,” Moss said. “It’s cool to see the progression of that.”

Moss said Broadway & Brew has become an event that a lot of people in the community look forward to.

“The people I’ve talked to have either inquired about when it’s going to be or asked for more details about it,” he said. “I think it’s something that people look forward to every year.”

Moss knows he looks forward to the night every year and believes Broadway & Brew has earned a reputation as consistent fun.

“I think over time, it has evolved into one of those things that people know they’re going to have a good time at,” he said.