Autumn in Oklahoma means a plethora of festivals celebrating the diversity of the state’s cultural intersections. 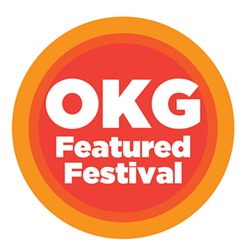 
Hot on the heels of the opening of the lower portion of Scissortail Park comes Foodie Fest, an OKC Black Eats event formerly known as the Black Foodie Summit, to be held in the upper portion of the park Oct. 8.


“We had a great following, great presentation participation with Black-owned businesses and minority chefs so I was having conversations with my peers and they were asking about opportunities for them to be involved in the Black Foodie Summit,” founder Apollo Woods said.


“So the intersection became, how can we create a very culturally-forward opportunity that doesn't alienate my core audience of Black-owned restaurants and chefs that includes other minority and ethnic groups? So Foodie Fest came about … We have three that are coming from out of state, but what's most interesting about what we're doing is the majority of the businesses are women-owned, the majority are minority owned,” Wood said.


Foodie Fest takes place during OU-Texas weekend and the festival will have an eight-foot by ten-foot screen so that the game can be watched while visitors enjoy the event.


A total of 57 vendors will be on hand, the overwhelming majority of which will be selling food.


“We have a range of food from pan-African to comfort food to soul food to barbecue American style. Latin, Vietnamese, vegetarian. We have a lot of food. We are emphasizing Oklahoma-based local businesses at Foodie Fest because the emphasis is about stimulating the local economy and driving local spending to those local businesses. The spirit of Foodie Fest is about how we bring attention to our diverse food scene in the city. We have a lot of events that happen in Oklahoma City and I felt like we didn't have was a platform that showcases culturally inclusive cuisines from across the diaspora. I mean, we have a Puerto Rican food cart. I'm excited about Puerto Rican food. I've never had Puerto Rican food in Oklahoma City,” Woods said.


Greek Festival
Sept. 30 - Oct 2
After two long years of waiting out the pandemic for the best gyros in the city, the Greek Festival returns to Saint George Greek Orthodox Church Sept. 30 - Oct. 2. In addition to the gyro (roasted meat on a vertical spit), there will also be souvlaki (pork kabobs), soutzoukakia (meatballs), pastichio (Greek lasagna with layers of beef and noodles with a creamy top) and saganaki (“flaming cheese,” or Greek cheese topped with cognac and set alight before being doused with freshly-squeezed lemon). While the rich dishes are the centerpieces of this festival, it started as a bake sale to benefit the church, so there will also be baklava (a flaky and nutty pastry sweetened with honey), and melomakarona (a nut-filled dough covered in a honey syrup), kourabiedes and koulouria (butter cookies). Ouzo, an anise-based liquor, as well as Greek wines, cognac and Alfa brand beer will also be enjoyed while Greek band To Kefi and three dance troupes wearing traditional Greek garb will be performing throughout the day. Partial proceeds will benefit the Brendon McLarty Memorial Foundation, which puts emergency inhalers into schools. Visit saintgeorgeokc.org.


Originally a festival to commemorate the 75th anniversary of the city of Yukon, the Czech Festival has continued for more than half a century, becoming a tradition of its own. Always held on the first Saturday in October, that happens to be Oct. 1 this year and kicks off with a 10 a.m. parade on Yukon’s Main Street. Following the parade, the Oklahoma Czech Building becomes the center of attention, with more than 150 vendors and live polka and carnival rides in addition to traditional Czech dishes like the kolache (a fruit-topped pastry) and the klobasy — a grilled sausage — sandwich. The day concludes with the Oklahoma Czech Royalty Coronation Ball at the Czech Hall. Visit czechfestivaloklahoma.com.

Don your brown fedora and bring your treasure-hunting gear (most importantly a metal detector) and join the hunt for buried coins, relics and prize tokens. There are thousands of dollars worth of coins up for grabs at this festival (formerly known as the Red River Treasure Shootout). The three-day event festival includes a parade, car show, movie night, shootouts and reenactments in McAlester Sept. 23-25. The main event takes place at 2 p.m. on Sept. 24 with a kids treasure hunt will be held at 10:30 a.m. The second annual Moonshine Hunt takes place the night before at 9 p.m. Nothing will be buried in that hunt, but light sources are not allowed. There will also be an unburied treasure hunt throughout the city the duration of the festival. Visit the Oklahoma Land Rush Detecting Weekend page on Facebook for more information.


If you’re a skeptic, you’ll find a host of people to fill you in with first-hand accounts of their encounters with the large primates in the wilds of their respective necks of the woods at the Honobia Bigfoot Festival & Conference. Held on the Grounds of the Kiamichi Mountains Christian Mission Sept. 30 and Oct. 1, admission to the festival is free. Speakers begin at 10 a.m. both days, concluding by about 5 p.m. Both nights will also feature storytelling at sundown and if you decide to stay the night on the beautiful grounds, $10 tent camping is available as well as three dorms provided free of charge. Visit honobiabigfoot.com