Julius Jones, an Oklahoma man on death row, filed an application for clemency. 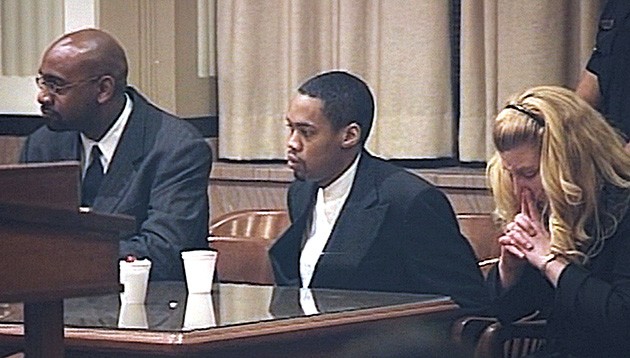 Julius Jones has spent nearly half of his life on death row. He was convicted for the 1999 murder of Paul Howell but always maintained his innocence and has now filed for clemency. He cites his innocence, inadequate representation and racism as the reasons for requesting commutation, a type of clemency.

“I have spent the past twenty years on death row for a crime I did not commit, did not witness, and was not at,” he wrote in his application. “I feel terrible for Mr. Howell and his family, but I was not responsible.”

Howell, described as a white businessman, was shot and killed in Edmond. The only witness was his sister, who gave a vague description mentioning that the shooter had an inch of hair and a red bandana. Though Jones says he was at home when Howell was killed, he was pegged as the shooter, tried by a jury and sentenced to death in 2002.

“At the time Mr. Howell was shot, I was at my parents’ house, with my family, miles away,” Jones wrote. “Despite that, my overworked, underpaid, and inexperienced trial lawyers failed to adequately investigate my alibi, failed to present helpful evidence, and didn’t call a single member of my family to testify that I was at home with them on the night of the crime.”

Jones was represented by attorneys from Oklahoma County Public Defender’s Office. In his application, he wrote that his lawyers “simply rested after the state finished its case without presenting any evidence or calling a single witness,” including himself. Jones wrote that he had every intention to tell his story but was advised not to testify by his attorneys.

He went on to state that his former friend Chris Jordan was the sole culprit. He also said Jordan set him up and admitted to doing so.

“Prior to my trial, Chris admitted to two people that I wasn’t involved in the murder. In late August or early September 1999, Chris told a man named Manuel Littlejohn that ‘Julius didn’t do it’ and ‘Julius wasn’t there,’” Jones wrote in the application. “Chris admitted to Manuel that he tried to frame me by wrapping the gun used to commit the crime in a bandana and hiding it in my house. Chris also told Manuel about his secret side deal with prosecutors, telling him ‘I’m going to do fifteen years and go home.’ That’s exactly what happened. Even though I told my lawyer about Chris’s confession, he never asked Chris about it and he never called Manuel to testify at my trial.”

Jordan took a plea deal to testify against Jones and was sentenced to prison for 30 years before being eligible for release, but he was released after serving only 15 years.

“I have spent the past twenty years on death row for a crime I did not commit, did not witness, and was not at.”
—Julius Jones tweet this

Last year, Jones’s current legal defense discovered that at least one juror — in a nearly all-white jury — was influenced by racial prejudice. In an application for post-conviction relief, they state that a member of the jury told the judge that another juror said the trial was a waste of time and that “they should just take the [N-word] out and shoot him behind the jail.” That juror was never removed.

Jones also wrote about racism during the trial in his application.

“Prosecutors took every opportunity to racialize me by appealing to the deeply entrenched and stereotypical association between blackness and dangerousness,” he wrote. “In urging jurors to sentence me to death, prosecutors argued that I was a ‘continuing threat’ because I was ‘out prowling the streets’ engaging in criminality. … At the time of my trial I had no prior violent felony convictions. I had gotten into some trouble previously, but none of it was violent.”

Cece Jones-Davis, a local worship leader and social advocate, started building advocacy efforts for Jones after watching The Last Defense, an ABC docu-series chronicling Jones’s case. She said she didn’t know anything about the case before the series aired and described feeling woken up by it. Now, she leads a movement locally advocating Justice for Julius.

“It’s something that so many of us are passionate about because we feel something deeply wrong here,” she said. “We are doing our best to move the hearts of the members of the Pardon and Parole Board and the governor to see what it is we see and to understand why it is we are so upset about this. It’s going to take a significant amount of us to move the needle in Oklahoma and outside of Oklahoma. We need all of those who  have the capacity and the courage to step up and help in some way by promoting the petition, encouraging people to watch the documentary, wearing a T-shirt, writing the governor and writing the Pardon and Parole Board.”

Jones’s clemency application has received support from several local and national leaders who have urged the Pardon and Parole Board and Gov. Kevin Stitt to commute his sentence, including county commissioner Carrie Blumert, Oklahoma NAACP, Oklahomans for Criminal Justice Reform (OCJR), various national evangelical leaders and even Kim Kardashian West, who has been using her platform to advocate for criminal justice reform.

“At the time of Julius’ trial, the eyewitness description of the shooter did not fit Julius. Instead, it described his co-defendant who served 15 years and is now a free man,” Blumert wrote. “Julius’ attorney was an overworked public defender who failed to cross-examine Christopher Jordan on the six inconsistent statements he gave to the police upon arrest. … The evidence used to convict Julius was inconsistent and several eye-witnesses provided an alibi for Julius.”

“Oklahoma has the highest incarceration rate in our country and in the world. We know that racial minorities and women are impacted the most by this reality, and we know that racism, systemic corruption, and classism have historically hindered American ideals of justice,” wrote OCJR executive director Kris Steele and board member Susan Esco. “Clearly, our system has failed on numerous occasions, and has almost killed wrongfully convicted persons. It’s time to examine the merits of Julius Jones’ file and we respectfully request a clemency hearing on his case.”

Adam Luck, a member of the Pardon and Parole Board, tweeted about Julius’s clemency application. He said clemency hearings are set once an execution date is set, but Oklahoma currently does not have any executions scheduled, as the state is still developing the new execution method. That’s why Jones filed for commutation and not just a clemency hearing.

“It is another means to achieve the same goal of presenting his case to the board and governor,” Luck wrote. “Once applications are received they are screened for eligibility and placed on these dockets prioritized by crime. The eligibility of his application and how the board decided to prioritize his case will affect when it is up for the first stage written review.”

Visit justiceforjulius.com for information on Jones’s case and a link to The Last Defense.