Home on the Range

Home on the Range offers 20 different ways of looking at a buffalo.

“So many of the things that buffaloes were utilized for were ceremony, and those kind of things continue on today,” Farris said. “Obviously, historically, buffalo were a little more important. They were a food, clothing and shelter source for Native people, but to several tribes, they have a very special or cultural significance that changes from tribe to tribe. … There are 39 different tribes in Oklahoma, so it’s not a singular contemporary meaning. That’s partially why this exhibit is so interesting because we have so many different options of meaning and translation.”

Like the artists, each tribe has its own interpretation of the buffalo’s significance.

“For example, in my mother’s tribe, the Otoe-Missouria, one of the clans is Buffalo,” Farris said. “Those people in that clan had certain responsibilities amongst the tribe. It’s a little bit different now. We still maintain our clan identity, but it’s not quite the same caste system as it used to be. But it was obviously a significant animal to the tribe, historically, and we just continue that on today.”

“After a certain repetition, you kind of
fall in love with certain animals
and certain subject matter.”
—Dylan Cavin tweet this

Though the animal commonly appears in traditional Native art, Farris said the artists in Home on the Range have represented it in a variety of surprising ways.

“I think a lot of people when they think of Indian art, buffalo’s definitely a natural subject matter, but what I think is so exciting about this show is just how different that interpretation of that theme will be,” Farris said. “We have a lot of artists that are doing some very exciting work. … Some artists took a very literal translation of the buffalo, and I’ve seen a couple of pieces that really don’t even feature a buffalo figure; they kind of toyed with the concept in other ways. I’m excited to see everybody’s reaction to it.”

Spotlighting fresh and surprising expansions on the meaning of Native American art is part of Exhibit C’s mission.

“The artwork that we exhibit here is usually atypical of what people consider to be Native artwork,” Farris said. “We try to exhibit artists that have really exciting and sometimes different points of view. We wanted to have a really wide spectrum of artists and techniques, so we have carefully curated everyone. Everybody’s a little different; that was intentional in order to get as many perspectives and tribes and as many techniques out there, just to show the versatility of Native American art, and with such a broad-spectrum subject like a buffalo, it was an easy thing to do.” 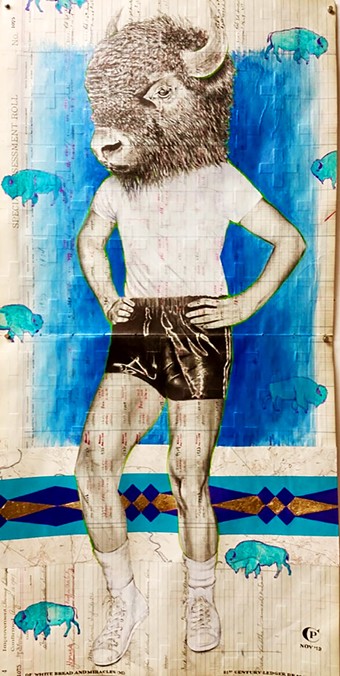 Hoka Skenandore’s “BuFfaLO” combines impressionism with graffiti; Chris Pappan’s “Of White Bread and Miracles” superimposes contemporary magical realism over bureaucratic paperwork; Jennifer White’s “Arikara Brothers” is both minimalistic and surreal. Ishkoten Dougi’s work, Farris said, is difficult to describe.“It’s more referenced in text, but the imagery is still somewhat related,” Farris said. “It’s kind of hard to explain, but that’s also why I think this is exciting. People can come in and see some things that are a little bit strayed from the standard.”

Dylan Cavin, showing two works, said the buffalo has become, to his surprise, a common subject for his art.

“Being an Oklahoman and showing at a lot of Native American venues, it’s pretty popular, and [I use it] in my work fairly often,” Cavin said. “It’s become a subject I really like, not necessarily something I thought I would embrace doing, but definitely over the past few years, it’s jumped up to the forefront of a lot of my subject matter. … After a certain repetition, you kind of fall in love with certain animals and certain subject matter.”

Initially, his artwork was more inspired by pop culture.

“As someone who grew up reading comic books and drawing a lot of comic book characters and stuff like that in college, a lot of the stuff I did was a little bit more fantasy-type stuff,” Cavin said. “The older I get, the subject matter I tend to gravitate more towards is a lot closer to home — friends, family, animals that are local, whether I go to the wildlife refuge or visit the zoo — something a lot more tangible. I think as an artist, it’s really important to be able to talk about your subject matter.”

Cavin’s work on paper, “Oklahoma and Indian Territories Bison Map,” is an illustration with watercolor highlights, and he describes his “Oklahoma Winds,” an acrylic on canvas primarily painted with a palette knife, as a “little loose, little more abstract.”

To Cavin, the buffalo’s significance is largely symbolic and tied into its many meanings for other people.

“For me, it’s just kind of that popular Oklahoma state animal with all the history on it,” Cavin said. “I don’t really want to say that it doesn’t have any significance to me, because it does, but it’s a little more subliminal than that, I think. … Why is this important? It just kind of is.”

Cavin is curious about how the other artists in the exhibition will represent the buffalo.

“I’m excited to be in the show and excited to see all the other artists and how they approach the subject matter and what other significant aspects they bring from their specific tribe,” Cavin said.