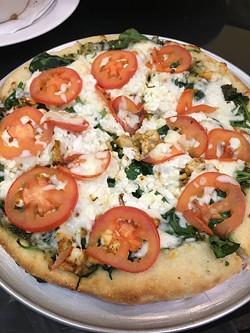 Sergio’s Italian Bistro, 104 E. Gray St., in downtown Norman appeared on my radar because of its prices. Oklahoma City has Italian food options, but they tend to range from the fancy (Patrono Italian Restaurant) to quick and serviceable (Italia Express Pizza & Pasta).

Opening up the menu at Sergio’s, it quickly becomes apparent that the prices are a middle ground between expensive and cheap. The most expensive item on the menu is the baked salmon ($16.50), and it’s just one of three dishes on the menu at $15 or more for dinner.

Sergio’s is not a case of a restaurant that keeps its prices down while suffering quality, either. Owner Sergio Garcia relies on his background as an accountant to plan his budget properly and pass the savings on to the customer.

Garcia got an accountancy degree in his native Mexico before moving to the United States in 2003. Not long after relocating, he found himself helping out with the books and in the kitchen of an Italian restaurant in Norman.

“I had a passion for food since I was little,” Garcia said, admitting that he pursued accounting at the behest of his parents. “I thought I had more professional opportunities being an accountant, so I did it, but then I started working with a restaurant and I loved the business.”

Garcia opened his namesake in 2011, choosing to focus on Italian food because it’s the cuisine with which he has the most experience. In recent years, Sergio’s has added a bar, outside seating on a patio and live music every Friday.

“We’ve done baby steps,” Garcia said. “We’ve had people who’ve been coming this whole time, and they love how different it is now.”

Garcia recently hired a new head chef, Chase McBride, and said new menu items will begin to trickle out the next six months. Sergio’s will begin a weekend brunch service in November.

Garcia sits down to do a monthly budget for his restaurant and uses his accountancy background to edit the menu or make smart investments at a gradual rate, like the bar and the patio additions.

“I wish I had gone to culinary school, but [accountancy] also helped me because I can analyze the numbers to see where we’re doing good and where we need to do better,” he said.

Garcia has made the decision to make nearly everything on the menu in-house, the exceptions being the focaccia bread and tortellini. He said the most popular items on the menu are the Alfredo sauce, stuffed mushrooms and baked sandwiches.

“I love the pizza, however,” Garcia said. “I can eat pizza every day.”

I began my meal with an appetizer of olive bruschetta ($7.75 at lunch), which was a solid execution of the tomato-based topping that added an olive tapenade, red peppers and capers for added salty and sweet elements. I topped a few bites with a splash of balsamic vinegar on the table, and the acidity really set a nice contrast.

A side Caesar salad arrived next, and I was pleasantly surprised at the execution of the dressing, which is made in-house. Far too many times, Caesar can be too creamy, almost like ranch. Sergio’s variety was light, almost like vinaigrette.

I ordered a lunch portion of cheese tortellini ($9.50) without realizing it was one of the only pastas on the menu not made in the kitchen. The tortellini was topped with the house marinara sauce, which Garcia said spends at least four to five hours in the oven. The time spent on the sauce pays off. It has a complexity and depth of flavor that can only be derived from time and care.  I was disappointed to see that the pasta didn’t finish cooking in the sauce, but I also realize others like to control their own noodle-to-sauce ratio by mixing in a few plain noodles.

I also wanted to try the pizza because I noticed that the menu mentions the hand-tossed herb crust is baked in a stone pizza oven. As someone who has tried baking his own pizza without a pizza stone, I understand the importance the tool provides in producing an even bake that keeps the outside dough crispy and inside soft. I ordered the chicken, spinach and pesto ($12.75) and added a portion of Roma tomatoes to the pie that uses basil pesto as the base and blends feta and mozzarella cheese. The sauce provided a subtle base to accentuate the fresh toppings, but the star of the pizza is the crust. It gets a boost from herbs rolled into the dough, and you can taste the freshness. It is soft and crispy but not at all chewy. The world is full of mediocre pizza, but Sergio’s certainly rises above the median. At 10 inches, I was expecting what amounted to be a personal pizza, but I was only able to eat a few slices and saved the rest for dinner.

The service at Sergio’s was friendly, but the restaurant does let you know that ordering a pizza will add a few minutes to your ticket time. The wait was hardly very long and well worth it.

Sergio’s is the epitome of a neighborhood Italian restaurant that punches well above its weight class based on its menu prices.

What works: The dough made in-house and cooked on a pizza stone was the highlight.

What needs work: The pasta did not finish cooking in the sauce.