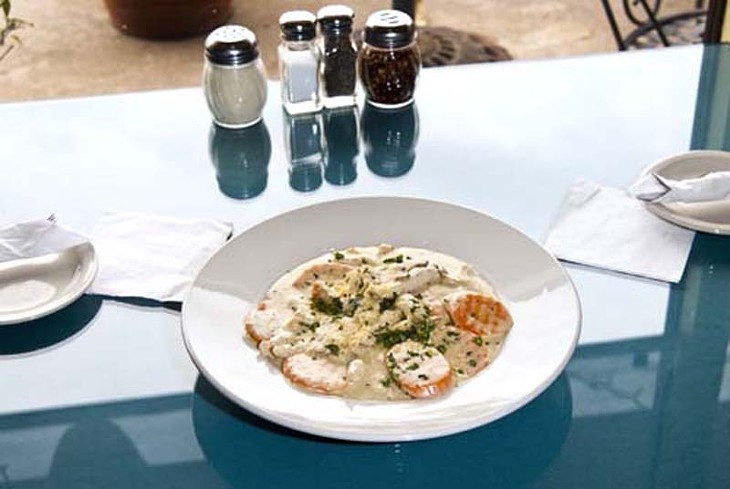 Great freshness and delicacy of flavors.

House salad dressing was too heavy on the vinegar.

Tip: Go with the nightly special, whatever it is. You won’t be disappointed.

A small Italian eatery offers big flavors with a loving attention to detail.

Sergio’s Italian Bistro is located in a busy area of downtown Norman, but there’s a mini greenbelt of aromatic herbs growing right outside its door. It was no surprise that freshly harvested rosemary was baked into complimentary hot bread that server Miranda delivered to our table first.

Sergio’s has daily specials, and they’re posted on a board in the entryway. Experience has shown that if there’s an appealing daily special, don’t even open the menu. Fresh seasonal ingredients tend to predominate, and the chef’s creativity is usually on display.

My dinner companion and I both chose the same entree from the specials board. It didn’t include a starter, so a small house salad ($4.50) and cup of butternut squash soup ($4), also a daily special, were ordered too. The soup was creamy golden ambrosia topped with obviously house-made croutons and a sprinkling of fresh parsley.

It was rich and satisfying but such a miniscule vessel of the stuff.

The only picky observation was that the squash had been over-pureed in the food processor. The salad was a pretty plate of raw spinach, cucumbers, carrots, tomatoes and red onion rings. House dressing had been recommended, but there were undoubtedly better choices. The taste was straight-up balsamic vinegar with apparently no other ingredients. It was probably just a matter of the dressing not having been stirred before splashing the salad.

Our main event, spiral pasta in artichoke pesto ($10.50) with grilled chicken on one and grilled shrimp on the other, arrived in wide and shallow white bowls. The artichoke and basil sauce was skillfully flavored with delicately prepared garlic and olive oil. That’s more difficult than it sounds.

Vegans and those with dietary limitations also are in luck. Sergio’s has recently added ten-inch pizzas ($8.50-$12), including vegan versions with mushrooms, sun-dried tomatoes and ripe olives. Owner Sergio Garcia can alter recipes upon request. His staff can prepare baked eggplant lactose and gluten-free, and the chicken dishes can be made with sliced carrots instead of pasta.

This is a reasonably priced place, but the chef ’s care shows in the details. The half dozen perfectly grilled shrimp were juicy inside with savory crust outside. Slices of chicken had a dusting of oregano and a similar grilled patina. The al dente spiral pasta was festive pink and green.