A former journalist presents the biggest challenge to Sen. Jim Inhofe’s seat in over a decade. 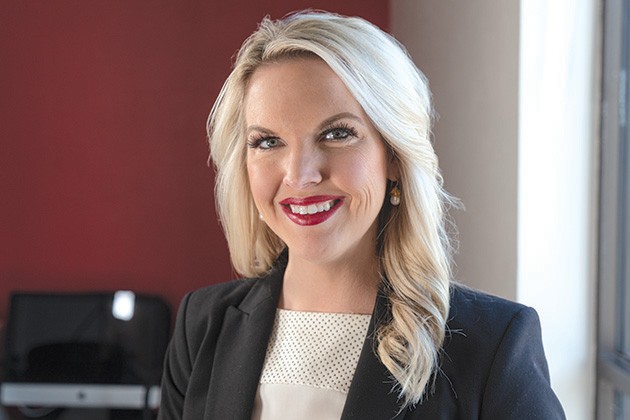 Abby Broyles has spent most of her life either wanting to be a journalist or being one. Now, she’s challenging Sen. Jim Inhofe for his senate seat.

After working at KFOR as a reporter and anchor covering the state capitol, she went to law school in hopes of advocating for Oklahomans in a way she hadn’t before. Broyles continued working as a journalist while attending law school at night.

“I graduated early from law school, and then I was kind of at a crossroads on what I wanted to do with my life,” she said. “I was interviewing in bigger markets across the country last summer when someone said to me that maybe I should run for office. … I looked at Jim Inhofe, who’s been in office since I was in kindergarten, and thought, ‘This guy isn’t representing us here in Oklahoma, the everyday Oklahomans.’”

Despite having the career she had dreamed of, Broyles stepped down from her position at KFOR in late October and launched her campaign the following Monday.

“My career, I felt, led me up to the point of going into public office. Being a journalist, you’re listening to people at their most vulnerable times. … When you’re approached about running for office, it’s a big deal, and it meant I would have to give up my TV career. I thought about it every day,” she said. “I couldn’t imagine doing anything else, but you develop a heart for people. You connect with them when they’re going through a tough time in their lives. So that ability to connect with people and feel like you’re doing something for a bigger cause has always been something that’s driven my career.”

Broyles recalls a specific news segment that mobilized her to challenge Inhofe.

“He went down to Midwest City and was touring the housing on base there where we had interviewed families that were dealing with mold and asbestos,” she said. “Many of them had moved to RVs across the street from their homes because the living conditions were so terrible.”

Inhofe hosted a press conference in which he said he has “never seen nicer housing” and that he probably would’ve stayed in the Army if they had had that kind of housing when he was serving.

“I just sat there watching the story, thinking, ‘This man is so out of touch with Oklahomans,’” Broyles said. “To see him be disrespectful to those families, that kind of stirred something up in me that I thought, ‘This is the time. He needs a serious challenger.’”

Broyles is that serious challenger.

“If we want to keep growing our economy and giving young people the future they deserve, we need to have new representation in the United States Senate.”
—Abby Broyles tweet this

JR Day with OkiePolls said this is the most competitive race for this seat since 2008 when Inhofe’s Democratic and Independent opponents collectively got 43 percent of the vote. OkiePolls’ initial model for the 2020 race shows Broyles getting nearly 44 percent of the vote on her own, assuming she gets the democratic nomination and there are no other party nominees.

“Our campaign is about giving people hope and something to believe in,” she said. “I grew up with the expectation that you get an education and things will work out in life; you work hard and you’re going to be able to live the life you want. While I’ve had so many opportunities, I’m running because I want to provide those opportunities to the next generation. I don’t think that you just go to college and work hard and you’re going to be successful anymore because our representation in Washington D.C. has put too many hurdles. … If we want to keep growing our economy and giving young people the future they deserve, we need to have new representation in the United States Senate.”

Of her priorities, she said health care is the top issue she is focused on.

She wants to protect health insurance for people with preexisting conditions and work to provide funding for rural hospitals, many of which have closed or are on the verge of closing.

Broyles also wants to tackle student loan debt. While she said she doesn’t necessarily want to erase debt, she wants to advocate for better interest rates and remove barriers that prevent people from getting a higher education.

While her website makes no mention of immigration, Broyles said she is dedicated to protecting DACA recipients and advocating for humane immigration reform.

“We need to protect the Dreamers. That’s first and foremost,” she said. “We have to look at immigrants as people. What has happened at the border has been catastrophic. My opponent has been very for building a wall and for ripping families apart at the border. That’s inhumane, that’s unAmerican, and we have to put a stop to it. ... Those are situations we should be ashamed of.”

While discussing her priorities, she has also repeatedly called Inhofe out. She describes him as “everything that’s wrong with Washington D.C.”

“When you look at Jim Inhofe’s career, he’s been in office continually since [Lyndon B. Johnson] was president. He’s never had to go on the health care marketplace and shop for health insurance. He doesn’t have student loan debt that is crippling him and preventing him from being able to buy a house. He doesn’t believe climate change is real,” she said. “This is someone who is so out of touch with people here in Oklahoma on very basic issues, and I felt like he just is truly not representing us. … It’s frightening to go shop for health care on the marketplace when it’s hundreds of dollars for a single person. This is a reality that Jim Inhofe is not in touch with because he’s been on the government dime for 53 years.”

Inhofe infamously brought a snowball to the Senate floor in an attempt to disprove scientific experts’ consensus on climate change.

“When you have someone who does stuff like that in the U.S. Senate, how can you expect the respect of businesses who could move to Oklahoma and provide jobs for people? When you have a senator embarrassing the state of Oklahoma on the national stage, companies aren’t going to be eager to come here and start tech jobs or clean energy jobs,” she said. “There’s no reason we have to be behind Texas when it comes to wind energy, but I think it goes back to that reputation we have on the national stage.”

Because of the momentum of her campaign and from what she has heard on the trail, Broyles is confident she can beat Inhofe.

“This is the year that people are ready for change. I see it when I walk into places where I’m supposed to speak. I think there’s going to be 10 or 12 people there, and it turns out there’s 70 or 80,” she said. “People desperately want change in Washington D.C. They don’t care about right and left; they care about their senator voting on things that are right and wrong and help their families. They feel like they’ve been forgotten, and I think that our campaign is giving people hope. 44 percent is the best a statewide Democrat has done in a very long time, and it’s February. We have eight months to be able to close that gap and provide an alternative that Oklahomans can believe in.”

The primary is June 30, and the general election is Nov. 3.