The Coathangers make a stop at 89th Street - OKC after releasing their first live album. 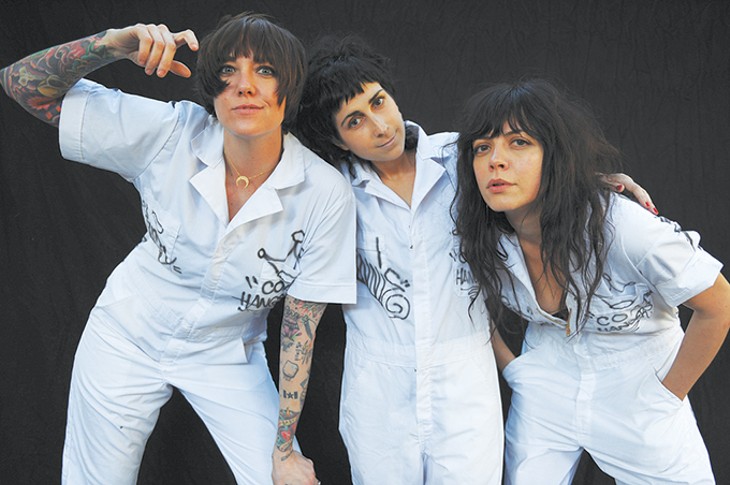 After more than a decade of punk rocking, the ladies in The Coathangers are more thoughtful about their rage.

“I think we had a point where it was a little bit mellower and had a little bit more melancholy feeling about stuff, and then with the election and with the changing of the country, I think we got all fired up again,” said guitarist Julia Kugel. “But I think now it’s a more careful way of expressing and speaking. Whereas before, I would just say, ‘I wanna fucking break your face,’ maybe I would use my words now, kind of delve into why I would want to get violent with someone. That’s the cool thing about hearing the early records; you’re just basically expressing how you feel, and now 10 years later, you might be wondering, ‘Well, what’s the solution?’ I could sit here and yell about how I’m angry, but that’s maybe not as productive. Now I try to be more productive and find answers.”

“That record is how we perform live,” Kugel said, “so before and after, that’s pretty much who we were. It’s just cool to get it on record what we sound like as opposed to in the studio. … In the studio, it’s hard to get worked up enough to be, like, wild because you’re in a more sterile environment and everyone is kind of on guard because you feel like you’re doing something that’s forever. So in live shows, you sort of relax and interact with the audience, just doing your thing.”

While fans have long known about The Coathangers’ fierce live performances, Kugel said the band has just recently become comfortable with the idea of being recorded in concert and with a camera crew shooting live footage for music videos.

“We had some in-studio performances, but just like bootlegs, not anything official, which is crazy, but we never really enjoyed that before,” said Kugel. “I think it took us this long to get comfortable with being filmed because even when people take photographs all up in your face at shows, it kind of distracts you from the show, so I think we had to wait this long in order to do it on our own terms with people that we know and were comfortable with in order to make it really authentic. We’ve never been, like, publicity hounds or showoffs.”

But knowing their performances were being recorded for an album was also intimidating.

“We were, like, terrified, deer-in-headlights sort of thing, and when we listened back to it, the first night was sort of mechanical,” Kugel said. “But then the second night, we tightened up our set and we were a little bit hung-over, which I think sometimes is good because you’re not thinking about everything so much, thinking about how this is forever. … All the better versions were from night two.”

Kugel and her husband, Scott Montoya, mixed the album together, a process she said changed the way she thought about the band’s upcoming album, scheduled to be released next year.

“You never really sit back and take a look at yourself, not often, and listening to it for a week straight, 10 hours a day, it really pumped me up for the new record,” Kugel said. “Every song on the new record is intentionally written to be played live. Before, we would have one or two songs that were kind of like, you know, ‘This is for the record, but we’re probably never going to play this live.’”

Concertgoers might get to hear songs from the new album at Sunday’s show. Spending so much time listening to herself live has also helped Kugel take a more relaxed approach.

“We couldn’t redo anything,” she said. “Everything bled into everything else. You can’t redo that solo. It’s done. Which is, I think, a way to come to terms with [being] a perfectionist. I’m always going to want to sit in there, mixing, so it was really nice to let go of that control, to sort of be like, ‘This is what it is, and that’s OK. That’s OK that there’s a dead note in one of the things.’ It’s pretty therapeutic.”

“We’re the only band to play a squeaky toy on a recording,” Kugel said, laughing. “Somebody told me that. It’s just an element of surprise. People in the audience are not used to a serious band being playful with life in general as well as music because the song is actually quite serious for me, the message behind it. It’s about losing everything and just being like, ‘All right. Fuck you, fuck it; I don’t need it,’ you know? And that was the best way to make a serious song, with this squeaky toy, because everyone smiles when they hear that thing go off. There’s joy in pain.”

The Coathangers’ tendency to temper the clear feminist anger expressed in many songs with a silly sense of humor has confounded critics and journalists writing about the band for years. A Creative Loafing article from 2007, for example, quotes Atlanta music execs fretting over whether the breakout band was a novelty act because of the flippancy of early eyebrow-raiser “Nestle in My Boobies.”