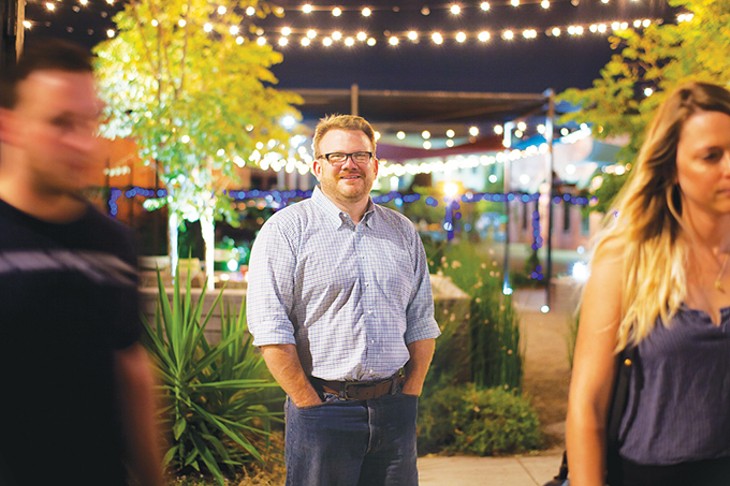 Those familiar with the city have probably at least heard of Dunlap Codding, particularly the firm’s role as a philanthropic force and frequent event host on Film Row. But in business terms, fewer are aware of what the intellectual property law firm’s exact work entails.

Douglas Sorocco, Dunlap Codding’s director and shareholder, said it is easier to think about who the company serves and protects than to list its many services and roles.

“We work with innovators, creatives, artists, musicians, entertainers — anybody that you can think of who comes up with an idea or something new that they want to do,” he said.

Sorocco himself could be described as a creative visionary. His ability to see potential in the Film Row stretch downtown along Sheridan Avenue at a time when few others gave the area much thought is part of the reason he will accept the 2018 Urban Pioneer Award, presented every year by Plaza District Association to honor members of the Oklahoma City community who exemplify the state’s pioneering legacy in leadership and a commitment to urban revitalization.

The honor will be presented at a special award banquet 11:30 a.m. June 14 at Oklahoma City University School of Law, 800 N. Harvey Ave. Table sponsorships are still available and can be found at plazadistrict.org/upa. Urban Pioneer Awards is the Plaza District Association’s largest annual fundraiser.

Sorocco, a native of suburban Chicago in Indiana, has lived in Oklahoma with his wife for the last 21 years. He joined Dunlap Codding his first year out of law school. His specialty in intellectual property law tends to be in business development, working with everything from local startups to large, multinational corporations like Johnson & Johnson or Siemens AG.

There were around 10 attorneys at Dunlap Codding when Sorocco first joined the firm. Since then, the company has doubled in size at least twice.

Sorocco might not be a native Oklahoman, but his invaluable work in the community through the last several years has more than made him an honorary local. In several ways, it is fitting that he will accept an award that embodies the Sooner State spirit.

“My wife and I made this our home here in Oklahoma,” he said.

Sorocco first moved to Oklahoma with his wife after she was accepted into a graduate school program at Oklahoma State University. Their first home was in Guthrie, but eventually, they moved into Oklahoma City into what is currently recognized as the 16th Street Plaza District.

Their location meant Sorocco spent a lot of time driving down Sheridan Avenue and Film Row far before the area was developed to the point it is at today.

“Whenever we would go to anything in Bricktown, Film Row was my cut-through,” he said. “So, I kind of knew Film Row. I have very good recollections, not of [Dunlap Codding’s current] building, but of what Joey’s [Pizzeria] looked like, what the Candor building looked like. Obviously, The Paramount building looked completely different.”

The road was rough, and there was a noted lack of development. Sorocco said the street was nothing that resembled anything he would be comfortable walking down.

In 2011, Dunlap Codding was looking at moving into its own building from the Valliance Bank Tower. They looked at a lot of buildings in the downtown area, but eventually, it was suggested to the firm that they look at an available property on Film Row’s Sheridan Avenue.

“When she said Sheridan, visions of the old Sheridan kind of popped into our head,” Sorocco said. “When we got down here, what I remember was all the construction happening from about two years prior when they did the streetscape.”

It dawned on Sorocco that the area was somewhere Dunlap Codding and other businesses nearby could have a significant role in shaping.

“It wasn’t 100 percent raw, but there was an opportunity for us to make a difference,” he said. “That was very attractive to all of us who were owners at the time.”

“To me, it means looking at areas that are often overlooked, underused or forgotten and having people coming in to shore up historic properties or helping a neighborhood get back up on its feet,” he said.

But he also acknowledges that urban development does not always carry a positive connotation. There are concerns about gentrification and the population that already inhabits an area before it is developed.

Sorocco said this is something Dunlap Codding has strived to remain conscious of since its move to Film Row. There was a large homeless presence in the area when the law firm arrived on Sheridan, and the firm has frequently invited that population into its home. Dunlap Codding often serves as a homeless dinner host during the holidays and on other occasions. In summer months, it has had cooling hours during which people could come and sit in the shade. It has also held barber days and clothing drives.

“By doing that, we’ve never had any issues here with anybody,” Sorocco said. “In fact, some of the folks became some really good friends and would watch the building for us or would clean up the building in the morning if they saw someone had left something. More importantly is that we treated them with respect and it gave us a chance to learn some things that you don’t understand until you’re in that situation.”

Things some people take for granted, like the ability to plug your phone in and charge it or to sit at a table and be served, are tremendous luxuries to others.

“If there is one thing we’ve done,” he said, “it’s the ability to show some kindness and compassion for the people who were here first.”

Anyone who has ever attended Glitter Ball, the one-of-a-kind annual dancing and art extravaganza benefiting deadCenter Film Festival, knows Dunlap Codding can throw a good party.

Dunlap Codding offers its space for free for every public, nonprofit event. Sorocco said just about every nonprofit in the city has utilized Dunlap Codding’s facilities at some point. The only requirement is space availability and the approval of a brief application. It also frequently opens its doors to arts organizations, and Sorocco tries to champion the local creative community as often as he can.

The firm has been hosting events for about five years now. Sorocco said in that time, about 50,000 individuals have passed through its doors. Hardly a day goes by that the building is not being used for at least one event.

“For us, it has become kind of amazing to watch because the space is pretty simple,” he said.

Dunlap Codding is not the only reason Film Row has gone from a place some people were afraid to go to an area that actually sees the occasional jogger or dog walker. Entertainment options abound in the district, from The Jones Assembly to The Paramount and nearby 21c Museum Hotel.

Sorocco believes Film Row’s next big step will be the completion of the West Village housing and retail development on Main Street near 21c.

“It’s going to bring a level of excitement and engagement that I don’t think people truly understand yet,” he said.

Adding the young professionals that are expected to populate the new development would welcome in an influx of new minds and interest in the area. Sorocco said the possibilities for the future are limitless.

Sorocco was astonished when he heard he was going to be this year’s Urban Pioneer winner, and he is appreciative of the honor. He notices a pioneering spirit not only on Film Row, but all around the metro area.

The openness to try new things and make a quick impact is part of the reason Sorocco and his wife decided to stay in Oklahoma.

“It’s very possible to do anything here,” he said. “Working with a lot of these startup [companies], yeah, it’s harder here. It’s not Silicon Valley. And yeah, it’s a little more difficult if you want to do an arts event from a financial side, but getting people interested? You can do almost anything and have 25, 30, 50 people show up. In many other cities, there’s this jadedness.”