While the FireLake Golf Course in Shawnee was closed for an extensive 14-month renovation, it meant course members and guests were deprived not only time on the links, but a chance to spend time with the course’s devoted canine protector, Scout the chocolate Labrador retriever.

As course director Chris Chesser and crew dismantled cart paths and trudged through mud to water freshly planted sprigs, Scout was there to raise the spirits of weary workers.

From the comfort of the climate-controlled tool shed warehouse near hole nine that doubles as Scout’s home, he has watched as the course, which is operated by Citizen Potawatomi Nation and is Pottawatomie County’s only public links, underwent a $6 million renovation.

But mostly Scout was wondering when the treats from golfers would start again, and he got his wish July 1 when the course re-opened.

Scout, who will turn 9 years old in September and sports a smattering of gray around his muzzle, arrived at FireLake years ago with course superintendent Derron Day, who trained and raised him as a puppy while at Muskogee Golf Club.

“I got him when he was seven weeks old,” Day said before turning to Scout. “Those were the good old days, weren’t they, boy? The golfers sure do love him. They spoil him, and it’s all good as long as they don’t give him fried food. He’s got a cholesterol issue.”

Chesser said Scout had problems with seizures, which his veterinarian traced to the overeager hands of golfers when Scout would jump alongside them in a golf cart. He even had to wear a shirt that said “no fried foods” as a reminder to limit his intake.

Trusty dogs have become as important to course superintendents as a good irrigation system, which was the impetus for the FireLake renovation.

Scout is the son of a pair of golf course dogs in Tulsa, and his duty is to keep the course free of wildlife that can damage the grass, which is largely a humane way to make sure Canada geese don’t get comfortable.

Geese can eat the sensitive grass around greens and tee areas and create health hazards with their fecal deposits, Chesser said, but state and federal laws also protect them.

“If he ever caught a goose, they’d kick his butt, but he runs them so much that they get so tired of running from him that they leave your property,” Chesser said. “You can’t kill geese; they’re endangered.” 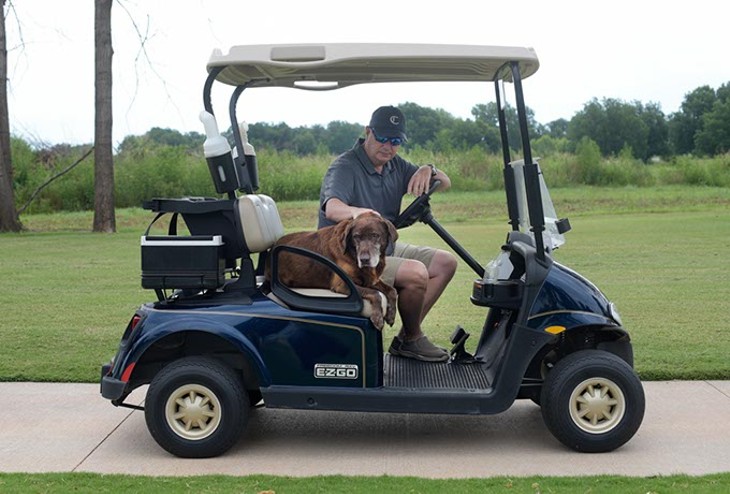 In the past, geese weren’t the biggest threat to the course’s scientifically engineered grass; it was archaic irrigation and drainage systems. Chesser said irrigation systems need to be replaced every 25 years, but the course was still using the original system from its opening in 1983.

“It would rain a couple of inches and we would have standing water everywhere,” Chesser said. “We used to have leaks all the time, but now it is flawless.”

The redesign by Heckenkemper Golf and United Golf, both Tulsa companies, added fairway bunkers, hills and mounds on the course.

“There are no more flat lies around here,” Chesser said. “You better know how to hit a downhill or uphill lie. If the ball is below your feet, it is going to go dead right.”

He said the hardest hole on the course is No. 4, which became a par four during the renovation, but his personal favorite is No. 7. New mounds flank a lake, which is one of 11 on the course, on the right side of the No. 7 fairway.

“I’ve hit a few balls in that water,” Chesser said, motioning to the No. 7 pond. “You hit a good drive and then just chunk it.”

The course is relatively short — a par 71 from championship tees — so the Latitude 36 Bermuda rough is what Day refers to as the course’s “defensive mechanism.”

“If you hit it in the rough, it just kills the ball and it’s tough to get out,” Day said of the grass, which was developed at Oklahoma State University.

The renovation also redesigned the driving range, adding distance mounds, and opened a two-story clubhouse. The original clubhouse was lost during a 2011 fire, which started as an electrical mishap in San Remo’s Pizza at FireLake, 1905 S. Gordon Cooper Drive.

Chesser was helping tarp greens when the fire started midday. Luckily, no one was in the building, and Potawatomi Nation brought in a prefabricated trailer within days to begin taking green fees.

Money from an insurance settlement, along with operating fees, helped pay for the recent renovation. The new clubhouse features a pro shop, a dining area and slot machines, which Chesser said are the only ones in a golf clubhouse in Oklahoma.

A new restaurant serves a variety of quick food, including sandwiches, fries and gyros, just as long as they don’t make their way into Scout’s mouth too often.

“Scout is going to have to train a new puppy soon,” Day said. “He still does well, but sometimes you have put him on the geese. He likes to act like he doesn’t see them.”

The course is open seven days a week. Green fees are $15-$38. The course hosts the FireLake Classic Golf Tournament over a weekend in late July and will host one leg of three in the Shawnee Shootout Golf Tournament, which runs Sept. 29-Oct. 1.

“We’re seeing people that we’ve never seen before,” Chesser said. “We’re getting visitors from Oklahoma City, Tulsa, Henryetta, Edmond, Yukon and all over. For the Firelake Classic, we even had guys from Texas come up. All of the reviews have been four and five stars.”

Print headline: Tee off, After lengthy renovations, Shawnee’s FireLake Golf Course is open to the public.