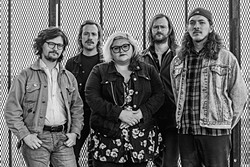 When Tina Halladay returns to Oklahoma City, it will be on a mission to recapture one of the best musical experiences she has ever had.

Sheer Mag, the breakthrough old-meets-new garage rock quintet from Philadelphia, last visited the metro area during 2015’s edition of Everything Is Not OK, the annual multiday do-it-yourself (DIY) punk music and art festival typically held in mid- to late-March.

Members of DIY punk communities across the nation flock to Oklahoma City for the fest each year. These revelers packed tight into 89th Street - OKC for Sheer Mag’s headlining gig more than two years ago, sweatily dancing shoulder-to-shoulder to the band’s delightfully rhythmic cadence — a change of pace from the more chaotically paced hardcore bands that often perform over the punk weekend.

For Halladay, the electric and unadulterated joy in the room that night was bliss in its purest form.

“I was almost crying onstage,” the vocalist said in a recent Oklahoma Gazette interview. “I was just really happy. There was an energy in the room that’s just rare for a show.”

The band’s profile has risen considerably even since its last OKC appearance two years ago. It was recently featured on the cover of Spin magazine and has played on Late Night with Seth Meyers and at Coachella. Need to Feel Your Love, released July 14 to many strong reviews, will appear on some 2017 best-albums lists by the year’s end.

Despite the rise in attention, Halladay said the type of energy that was present at Sheer Mag’s Everything Is Not OK appearance is far from regular. The band still plays in bars across the country where patrons might not know what Sheer Mag is or have any particular interest in hearing any kind of live music.

Halladay said Sheer Mag still feels a strong kinship with the country’s DIY music scenes, even with its new status as a darling of larger music blogs and publications. It is not just that these communities formed the earliest foundation of the band’s support but that their outward enthusiasm for the music is an exciting contrast to the less passionate showing they occasionally see across the country.

“When I look into the crowd and someone is yawning when I’m sweating fucking bullets and using every ounce of energy I have, it wears on your soul a little bit,” she said.

It is appropriate that Sheer Mag hails from Philadelphia because its music is packed with the kind of aspirational fervor that would have made America’s founding fathers proud. Sheer Mag also demonstrates a fondness for the weaponry of the Revolutionary period with its song “Expect the Bayonet,” the defiant fourth track from the new album.

The band puts a generalized, modern flip on the “no taxation without representation” sentiment, singing in the song’s chorus, “if you don’t give us the ballot, expect the bayonet.”

Sheer Mag frequently promotes protest and social action on Need to Feel Your Love. The opening song “Meet Me in the Streets” paints a scene of riotous protest against authority.

Halladay is not the type of American that has ever been comfortable claiming any kind of moral authority over the rest of the world. While some desire to return the country to a golden age, the vocalist feels there has never been true freedom and justice for all at any time in America’s history and that anyone worth their weight should be pushing to get us there.

“People striving for that and being hopeful — that’s what this country should be about,” she said.

Instead of mourning the current state of things, Halladay wants to use her music as a productive vehicle for optimism and rebellion.

“I’ve always felt like instead of being sad, being angry can help things,” she said. “It sometimes isn’t healthy, but being sad is so hopeless and nothing is coming from it. With anger, there’s usually an action that goes along with it and if you harness an action that’s actually positive, then that’s what’s important.”

Don’t let the protest songs fool you — Need to Feel Your Love, above all things, is about passion. Passion for love, for the community, for what is right — all of it is weighted the same.

Sheer Mag’s music is also about living life and fulfilling relationships to their fullest. Love can be a beacon of hope in a storm of hopelessness.

The band began in 2014 as a group of housemates with a lengthy history of playing music in Philadelphia’s DIY scene and touring around the nation — though those tours were often grittier than what they encounter today.

Halladay finds that most interviewers come to her puzzled about the way Sheer Mag does things. What they fail to understand, she said, is that the band comes from a different world than many of the indie rock bands sometimes lumped with it as contemporaries. From Sheer Mag’s DIY perspective, a cutting lyrical edge, sense of self-reliance and general reluctance toward self-promotion are par for the course.

“I don’t think they’re used to people who do things in that certain way,” she said. “And we continue to do it. We still put all our own records out and all of that. We wanted to show people that you can still do that.”

Sheer Mag’s ascension seems sharp, but Halladay said the band made it a point to distance itself from the steadily evolving hype that was surrounding them.

Though the potential to make money off its music is not lost on Sheer Mag — not at this point, certainly — it was never the group’s goal to make a living from it. Sheer Mag is a band that was made for fun and naturally grew into something more.

For Halladay, the climb in popularity has been one earned on plenty of sweat and tears.

“We’ve had shitty tours where we’re eating out of the garbage and had no money,” she said. “We’ve all been playing music for a long time, and we’ve all kind of paid our dues.”

Print headline: Rise above, Sheer Mag returns to 89th Street - OKC in the heat of its popular ascension.