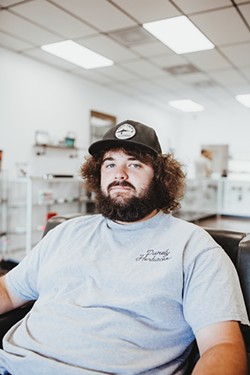 The staff at Top Shelf Health & Wellness, 2518 N. Meridian Ave., have been waiting a year to get paid what they are owed from a CBD isolate deal gone awry, but that is already in the rearview for the rapidly expanding business.

As previously reported by Oklahoma Gazette, Top Shelf OKC sued Hi-Tunes Distribution, LLC in Oklahoma County District Court on Feb. 14 over the deal, which occurred in 2018. On May 24, district judge Susan Stallings awarded them $72,600, the full amount requested, in a default judgment, according to the order.

“Defendant was required to appear and defend this action … and that no appearance has been made by said defendant, nor has any motion or pleading been filed on its behalf,” Stallings wrote.

“We gave him plenty of time to bring the isolate back, give us the money. And, I mean, we’re getting more than what he owed us out of the deal, so that’s that, really. No hard feelings towards him or anything, but business is business,” said Top Shelf co-owner Reed Mitchell. “We had come in contact through another partner of ours, and we were going to do something when Hempfest was coming to Oklahoma, and that never seemed to come to fruition.”

Another lawsuit involving Oklahoma Hempfest and Hi-Tunes is still being litigated, but Top Shelf is not a plaintiff in that action.

The terms of the original deal were in exchange for the money, Top Shelf expected to receive 8 kilograms, or 17.6 pounds, of CBD isolate within 10 days and $12,000 in cash within 30 days. The deal was also supposed to include a direct line of communication to the supplier of the CBD isolate. A clause in the contract provided for a full refund if Hi-Tunes failed to meet its end of the bargain.

“Hi-Tunes failed to perform all or nearly all of its obligations under the Contract,” the petition states. “The CBD isolate it delivered to Top Shelf was of insufficient weight and/or inferior quality to be sold at fair-market value. Hi-Tunes did not pay Top Shelf $12,000, or any amount, within 30 days of the Contract’s execution. And, Hi-Tunes never provided any proof of purchase or put Top Shelf in communication with the CBD isolate’s source.”

Top Shelf was refunded $4,000 in September with the promise that the rest was to follow. The petition states it never did. In February, Hi-Tunes founder Scott McKinley acknowledged that he still owed Top Shelf $8,000, which Mitchell said still had not been paid before the judgment in Top Shelf’s favor.

“It got to the point where we got too busy here and had to let the attorneys handle it,” he said.

“We kind of got in trouble with the investors for a second, but once weed came in and the store started turnkeying, they were more than happy,” said co-owner Jacob Gorman.

“Since then, we got flower and business is booming. We haven’t looked back yet,” Mitchell said.

“Reed and I knew each other in high school, and then I had moved out to Colorado. Life goes by. He brings up CBD. I’m like, ‘That’s a great idea.’ I knew my buddy here, good business guy. We all got together and started with a white board,” Gorman said.

“We saw an opportunity,” Jackson said. “I don’t think we knew that medical was going to be so soon upon us, but we still saw the opportunity, thought we could run with CBD until the time came, and the time came sooner than expected.”

“We wanted to be our own bosses and work together,” Gorman said.

“Whenever we started, we were broke. No money,” Mitchell said.

“All we got were questions. People would just come in and ask questions,” Jackson said.

But just a few weeks later, Oklahoma voters approved a medical cannabis industry that would be kick-started just a few months down the road.

Mitchell and Jackson are both 26 years old, but Gorman turned 25 on July 2. The minimum age to operate a cannabis business is 25 years old, according to state law, so Gorman just squeaked by.

“We applied a month after that,” Gorman said.

"We’d never thought about doing medical marijuana or owning more than one store or a grow or a processing facility,
so it’s definitely a lot bigger than
what we’d ever planned."
—Reed Mitchell tweet this

They did not even realize the age requirement until they saw the application.

“At that point, you’d have to have another LLC that I would be a part of and then another LLC that applied for the license, which makes it way more complicated. Now we have nine LLCs,” Gorman said.

“We got lucky,” Mitchell said.

But it is not all luck. Their business prowess has provided enough return that they are set to open another location next month at 1114 W. Hefner Road. Then they plan on opening third and fourth stores, Mitchell said.

In addition, they already have one small grow, approximately 1,500 square feet, operating, and the first of five 10,000 square-foot facilities is currently being built. And they will also be debuting their line of processed cannabis produced under the name Naked Extracts. Mitchell said the extraction facility should be built by the end of the month.

“We’d never thought about doing medical marijuana or owning more than one store or a grow or a processing facility, so it’s definitely a lot bigger than what we’d ever planned,” Mitchell said. “It was a long, stressful year there for a while, a lot of money being spent. Finally, towards the end, we started to see some you got some good numbers. And hopefully by the end of the year, you know, we’ll really be moving on down the road.”