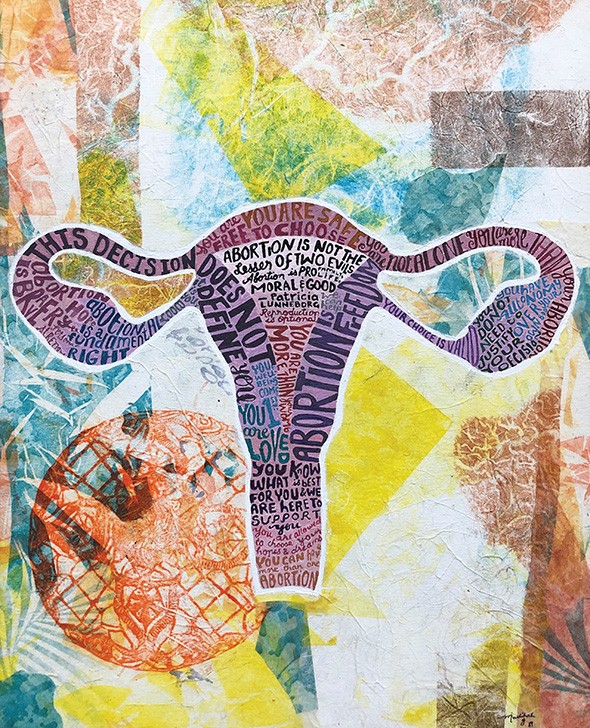 Fighting for Abortion Access Is an Act of Love

Abortion can be a hard topic to talk about, but approaching it artfully may change the tone of the dialogue.

“Doing reproductive rights work, we get some pretty vile responses sometimes, and it's just kind of hard to break through in that conversation with people,” said Danielle Williams, co-director for Oklahoma Call for Reproductive Justice (OCRJ). “We thought about art as a really good way to just show people the personal impact, make it a creative expression that might be a little easier to digest and spark new ideas and new ways to talk about this and reach new people, basically.”

Fighting for Abortion Access Is an Act of Love, an exhibition of works by local artists, is 2-4 p.m. Saturday at Kamp’s 1910 Café, 10 NE 10th St. The event will be the fourth in a series of shows also held in Norman, Edmond and Tulsa. Williams said the first show at University of Oklahoma was a success with a bigger turnout than expected.

“We hosted a conversation after, and everyone was pretty engaged, talking about some of their own stories,” Williams said. “Some people were literally, just like we wanted them to, using the art to say, ‘This artist interpreted fighting for abortion rights in this way, and it spoke to me for whatever reason,’ so that was really nice.”

Williams said a casual conversation is often best because “where healthcare and law intersect, it can be kind of intimidating.”

“Overwhelmingly, we want people to let it be a free-flowing discussion,” Williams said. “If you have questions or if you want to talk about your own experience, it’s going to be very open. There’s not going to be a formal panel discussion or anything like that.”

An annually updated zine titled How to Get an Abortion in Oklahoma will also be available, but Williams cautioned that some of the information might soon be outdated depending on the outcomes of multiple ongoing court cases concerning state abortion restrictions. Center for Reproductive Rights attorney Rabia Muqaddam will be present to take questions about current litigation in and outside Oklahoma.

“Abortions are not easy to access or afford for practically any woman due to the amount of restrictions imposed on clinics and the cost of the procedures,” the zine, also available on OCRJ’s website, says, but it later adds, “Most people do not regret having their abortions. … The number one most common emotion reported after an abortion is relief.”

“We don't have to paint abortion like
it's just a tragedy. Sometimes
it’s just a necessary thing.”
—Danielle Williams tweet this

While obtaining an abortion in Oklahoma can be complicated, Williams said finding a group of artists willing to contribute work in support of reproductive rights was much easier than she anticipated. Some viewers, meanwhile, might find that the artworks are more positive and uplifting than they expected.

“I kind of hope that they're surprised by the art, just because even with people who support abortion rights, the discussion so quickly spirals into tragedy and all the terrible things that could have happened to a woman who's seeking an abortion,” Williams said. “I'm lucky enough to have never needed abortion care, but I have a handful of friends who went through it, and they were just relieved once it was over. It was just like a weight off their shoulders. I mean, I'm sure it's a hard thing to go through, but it's a positive if that's what you need, and I don't think we should be afraid to just say that that's the case. We don't have to paint abortion like it's just a tragedy. Sometimes it’s just a necessary thing.”

Tiffani Nicole Sanders said her painting “Safe Space” depicts an Afro-futuristic vision of “women from the past, present and future unconditionally supporting a woman in her choice, whether it be physically, spiritually, emotionally, verbally.”

“In my paintings, with every stroke or color or even concept, I tend to tell the story of a certain situation,” Sanders said. “It may be my personal story or a story that was shared with me by someone that I met along my journey. … I’ve dealt with women who have had some very serious trauma in their lives, and I was the advocate for them. Many of the ones I helped were faced with this decision, so it's basically their story that I was trying to help them with portraying. … If I was in their situation … I would want someone to love me and respect my decision and support me in every way without question, without judgment.”

For Sanders, art is a safe space. 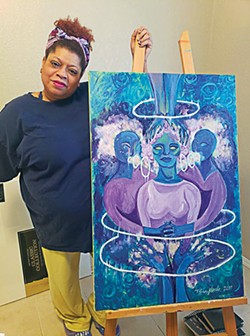 “It’s where I can be my true self,” Sanders said. “It’s where I can speak my truth. … There's always going to be some type of conversation coming from something I created because I told the story, and I'm making people look at something different and feel something different. For those who understand the story, they can relate to the story, and they feel safe within it, that someone is out there speaking the same story, speaking the same truth and they can relate to that.”

Madihah Janjua said her painting “Voices” depicts the positive effects of the support she heard patients receiving when she worked as a volunteer at an abortion clinic.

“It's a difficult decision when they come in, and there's this internal struggle because of what society says,” Janjua said. “There's a negative stigma associated with abortion just because of our current political climate living in Oklahoma. … Hearing some of the words of support and seeing the impact that it had on these women was something that's really struck a chord with me, and I wanted to make sure that if someone may be considering it or may have been in that situation that they saw the support that comes their way. There's healing in that, and it empowers women to be able to take control of their body and make their own decisions. I just wanted to be able to show that within this piece.”

“You are free to choose,” the painting reads in part. “You are safe. You are not alone. … You are loved.”