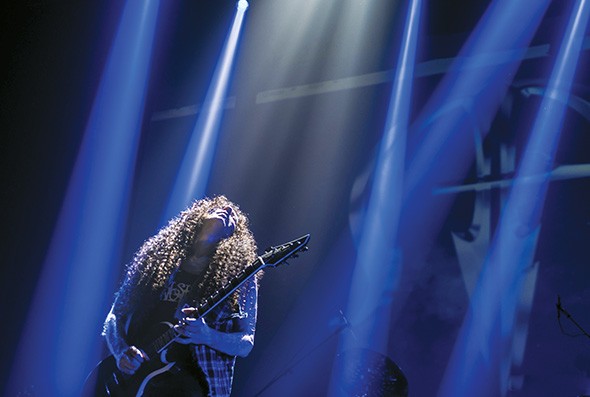 He has released albums called Speed Metal Symphony and Music for Speeding, but guitarist Marty Friedman said years have passed since he was impressed by quick fingers.

“When I was a kid, I was just blown away by people who could do something faster than I could do it,” Friedman said. “If you’re learning to do anything and you see someone in front of you who can do something that you physically can’t do, it’s pretty mind-blowing. But as far as music goes, it’s really not important at all. … Being able to pull some of those fast things out of your bag is a good trait to have, especially when you’re playing guitar-oriented music. A lot of fans want to see some of that stuff, but I would be certainly bored if it’s happening too much or all the time.”

Friedman, who formerly played in thrash-metal acts Cacophony and Megadeth, is scheduled to take the stage with his live band 7 p.m. Monday at 89th Street — OKC, 8911 N. Western Ave. The guitarist’s technical advice column and video series Full Shred appears regularly on Guitar World’s website, and his music is included on a plethora of compilation albums with the word “shred” or its variants in the title, but in a 2017 interview with the magazine, he said the word is a “lame-ass term” he associates with “a guy who plays fast meaningless shit all the time.” Instead of speed, Friedman — whose fascination with Japanese pop music led him to leave Megadeth to move to Tokyo after playing lead on seminal metal classics Rust in Peace, Countdown to Extinction and Youthanasia (and after learning Japanese from a University of Oklahoma correspondence course) — said he draws inspiration these days from the way new music combines genres and traditions from different countries. 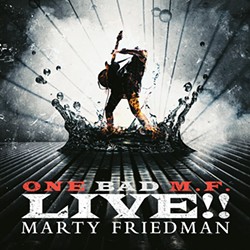 “I think music is getting better and better all around the world, particularly in Japan,” Friedman said. “I guess it’s just because people have access to more musical information than ever. People tend to soak it up better. I feel there’s a lot more competent people and a lot more creative people in the musical gene pool now than there was, say, 10-15 years ago. … It comes from people having a lot of influences that are all over the place. When people mix things up in an interesting way, that’s what kind of gets me excited. I listen to a lot of idol groups in Japan, idol singers, and what those groups often do is they have great producers and songwriters and musicians and they’re putting all kinds of things into the pot — everything from Beach Boys harmonies to dubstep beats to heavy metal guitar to dance music to soul music. They’re mixing it in such a weird way.”

Performing his own music — which blends metal with classical and world music influences — live, Friedman said he often draws inspiration from unplanned moments and even mistakes.

“You try to do things that are not exactly like a recital of the music,” Friedman said. “You try to improvise, you try to adlib and you just try to entertain the audience. And sometimes, when you do that, instead of just trying to play everything perfectly, sometimes they’re complete train wrecks, but for the most part, the accidents are really cool. When you have musicians in the band that have really strong personalities, when things don’t go as planned, hopefully they go in a cooler way than was originally planned. That’s why we like to do a lot of adlibbing, improvising and changing things on the spot.”

When choosing his band — bassist Kiyoshi, guitarist Jordan Ziff and drummer Chargeeeeee — Friedman said their personalities and showmanship were as important as their musical abilities.

“Image is so important,” Friedman said. “There’s already not very many people who are able to play my music properly, not because it’s all that difficult, but there’s very specific ways that I want it played and a specific kind of aggression that not a whole lot of people have, a certain kind of accenting that not a whole lot of people do. So it’s already limited, but I also wanted people who look like they are rock gods for a living. I didn’t want someone who’s a great player but looks like they have a job at the bank in the daytime; you know what I mean? I wanted people that you look at them for one second and you know the only thing they could possibly be doing was playing wild rock music.”

“I was never a very serious type anyway,” Friedman said, “but it kind of showed me that there’s a lot of fun to be had at the expense of the music that you’re making. Taking yourself too seriously is never a great thing. … A lot of people are afraid, especially nowadays, to say anything that’s going to ruffle anybody’s feathers, and a couple of the shows that I did in Japan were very, very much on the offensive side of things. We didn’t hold anything back, and we said exactly what we thought about everybody that we were talking about. Of course it was very good-natured, but there was really a lot of strong opinions that were very, very funny, and that’s why the show lasted as long as it did.”

Released in 2018, Friedman’s latest album, One Bad M.F. Live!!, captures a Mexico City concert from the tour supporting 2017’s Wall of Sound. Working to distill the concert into a double live album gave Friedman new inspiration for his shows.

“It kind of helped me learn about the pacing of it because our live set is two hours long, a little bit more than two hours, and I edited it to make the live album shorter, obviously,” Friedman said. “In doing that, I got a good idea of how to tighten things up and change orders around, leave space for audience participation, all that stuff. So with that 75 minutes really tight, I decided to add a whole bunch of new stuff to the set list that we didn’t do on the last tour, stuff that people are going to be really surprised to hear us do on top of the entire live record, so it’s kind of an experimental thing that we’re going to do, and it’s going to be a lot of happy accidents, hopefully.”

Tickets are $20, and Texas metallurgists Immortal Guardian are scheduled to open. Visit 89thstreetokc.com.