Yummy Noodles lives up to its name as its owners find success after leaving Tsubaki Szechuan.

What works:Everything on the menu is flavorful and delivered quickly to the table.
What needs work:The soup dumpling arrived after the entree.
Tip:The restaurant is closed Mondays.

As quickly as Tsubaki Szechuan generated fans for its traditional Sichuan cuisine, it was gone. The venture between Peter and Mandy Liu and Henry Yang, of Tsubaki Sushi, connected to the Super Cao Nguyen shopping center captivated native Chinese immigrants and locals for its commitment to delivering flavors from the Sichuan province.

The restaurant opened in November 2017, and suddenly and without warning, it closed in March of this year with a Facebook post that intimated Yang and the Lius would be “going their separate ways.”

I was inundated with emails from multiple readers who wanted to know where they could get the flavors they’d grown to love at Tsubaki Szechuan. Szechuan Bistro at 1010 W. Memorial Road offers excellent service, but it takes a little cajoling with the staff to go beyond its base dishes that are tempered for an Oklahoma palate. Chuanyu Fusion opened at 7011 W. Hefner Road earlier this year, and it provides a traditional outlet for the northwest portion of the city.

Fans of the Lius rejoiced in July as they returned with Yummy Noodles, 1630 NW 23rd St., in a strip mall location near the campus of Oklahoma City University.

In comparison to the large dining rooms and huge menu at Tsubaki Szechuan, Yummy Noodles is largely as the name implies: noodle-based dishes with a few additional side dishes like scallion pancakes, eggs and dumplings.

As the weather finally dips into fall-like temperatures, I figured a visit to Yummy Noodles was needed, and it more than lived up to the expectations established at the Lius’ first Oklahoma City location.

The restaurant is a true “hole in the wall,” a shotgun setup with tables lining the walls and a door leading into the kitchen. Menus hang next to the tables and display the 14 available noodle-based dishes and a few sides like eggs, dumplings and fried mashed potatoes.

My wife and I arrived around 1 p.m. on a Tuesday (Yummy Noodles is closed on Mondays) to find the restaurant about half-filled. A server quickly took our drink order and gave us some time to look over the menu.

All of the entrees are noodle-based, mostly served in broth, but a few like the dan dan noodles (finished in chili oil) and Sichuan spicy cold noodles (finished with a peanut sauce) are for those not in the mood to slurp too much during their meal.

I ordered the No.1 dish on the menu, which is Chongquing noodles ($9.95 for large), also known at Xiao mian in China, according to chinasishuanfood.com . The dish is made with thin, freshly prepared noodles that are about the width of store-bought spaghetti but more flavorful and sturdy.

The key to Xiao mian is the Chinese red oil, which is a blend of ginger, star anise, Chinese cinnamon, cumin seed, fennel seeds and, most importantly, Sichuan peppercorn.

With a lemony and floral fragrance, the Sichuan peppercorn releases a numbing and buzzing sensation in the mouth thanks to the active ingredient hydroxy-alpha sanshool, which measured as high as 50 Hertz in a 2013 study at University College of London. 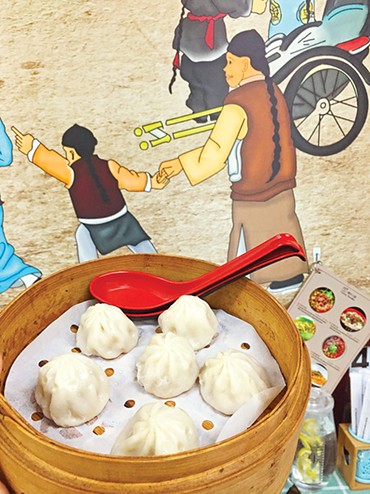 Unlike black peppercorns from the U.S., the Sichuan peppercorn isn’t explicitly spicy. The ingredient is best described with the Mandarin phrase mala, which roughly translates to “numb-spiciness.”

The chili oil is the base of the Xiao mian that is combined with fresh ginger, soy sauce and a few other ingredients. Braised beef, scallions, baby bok choy and cilantro add heartiness and freshness to the dish. The beef was tender but also wasn’t overcooked to the point of mush.

My wife had a hard time choosing between the wonton soups — one with chili oil and one without — before eventually ordering the spicy version after the server said the heat level can be adjusted. She ordered a two out of five and was happy with the final result.

I tried to few bites of the wonton soup for comparison and preferred the Xiao mian for its more powerful chili flavor and fresh noodles, but the wonton soup was filled with at least 10 dumplings and is a filling dish at just under $10. The wonton broth is heavy on the garlic compared to the Xiao mian.

In addition to entrees, we also ordered the soup dumplings, which are listed on the menu as “little juicy pork buns” ($5.95). Soup dumplings were arguably one of the most popular dishes at the original Tsubaki Szechuan because there isn’t another restaurant in the metro that serves the dish. Broth is cooked and allowed to congeal before it’s added to the dumpling wrapper with a mixture of ground meat. As the dumpling is steamed, the broth returns to liquid and acts like a built-in flavor-enhancer.

It’s a labor-intensive dish, so they actually arrived after the entrees, but they were just as good as I remembered at Tsubaki Szechuan, especially when paired with the soy sauce in small teapots on the side of the table that tasted exponentially better than the regular soy sauce in a bottle from the grocery store.

I’m delighted to see that Yummy Noodles is picking up where Tsubaki Szechuan left off, albeit with a smaller menu. I hope the streamlined options will cut costs and allow the location to have continued success.