J. Chris Johnson stands in front of his sprawling and stunning new art show at Brass Bell Studios, 2500 NW 33rd St., and talks about all the paintings he hasn’t yet made. 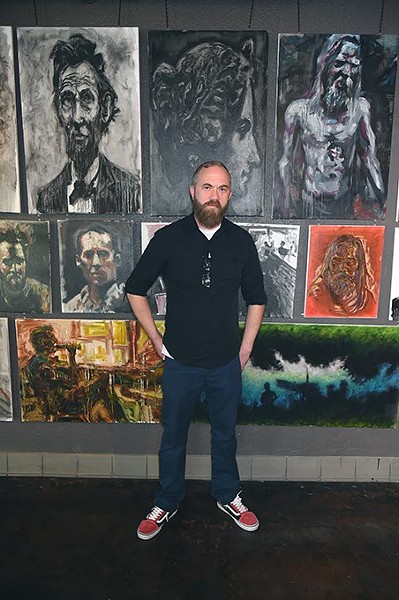 J. Chris Johnson stands in front of his sprawling and stunning new art show at Brass Bell Studios, 2500 NW 33rd St., and talks about all the paintings he hasn’t yet made.

There are 44 new oil paintings taking up the entire south wall of the studio, hanging an inch apart from one another in a gothic patchwork of shadowed faces and dim landscapes so tightly arranged and brooding it looks like a memory quilt somebody made for Edgar Allan Poe. It’s as if Johnson doesn’t see them.

“Once you’re used to something, it’s just making biscuits,” said Johnson, 40, describing his approach to his work over the past two decades. “It becomes a recipe. It’s easy to do the same thing over and over again if you don’t make a conscious effort not to. It’s why I like all of my newer pieces better than the old ones. I want to keep progressing and trying to stretch myself. I’m always looking for where to go from where I’m at.”

Where he’s at is a long way from where he has been. The Corpus Christi native has dabbled in different forms and mediums over the past 20 years but never attempted painting until he booked the Brass Bell show, which runs through Saturday. Not only that, but Johnson designed the exhibit’s breathtaking layout before he made a single brush stroke, essentially giving himself 44 blank canvases to fill before the first Sunday in June, when the collection debuted. 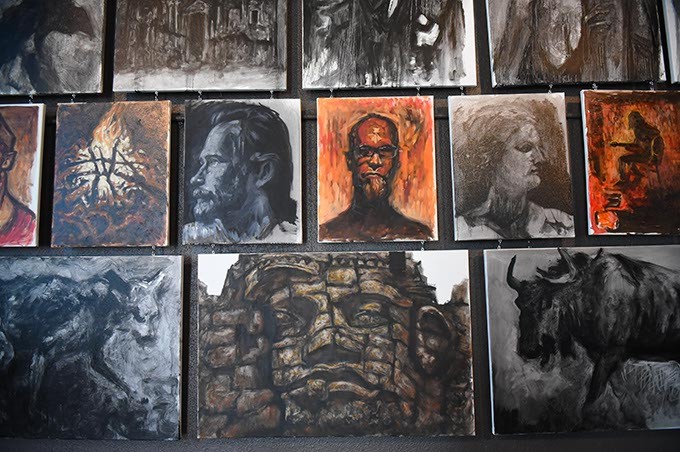 Johnson, who is mostly self-taught, said this collection of oil paintings is just the latest phase in two decades of artistic exploration.

“All I really did as far as training was take high school art,” said Johnson. “I skipped college for skateboarding. I figured all that would happen if I went to art school is that I’d go into a ton of debt and then I’d graduate and still be working at a craft store.”

A voracious creator, he compiled enough pieces early on to show in and around Corpus Christi and eventually discovered a unique portrait style that became the solid ground from which he could leap. His rough but beautifully rendered portraits of friends, sketched in homemade pastels on ragged scraps of cardboard, began popping up in local galleries three years ago. But while Johnson was beginning to gain some recognition for his signature style, he said he noticed a disconcerting pattern.

“There was just no progression,” he said. “I was making biscuits again.”

The pieces are bold, beautiful and painted with absolutely no regard for the possibility of error. Johnson admits that he makes three or four paintings every day, and it’s as if one can see his willingness to throw the canvas in the trash and start a new one at any time. The results are immediate and startling.

Roughly a third of the collection is made up of two-toned portraits: barflies, old Hollywood starlets, Johnson’s friends (some also admittedly barflies), even Abraham Lincoln. Some are stretched arbitrarily, as if some ancient tintype was being held up to a funhouse mirror. Some are bleeding and running off the edges of the canvas, a technique Johnson achieves by smearing turpentine over the painted surface. All of them are so emotionally — almost violently — laid down that it’s as though they were painted with knives.

“I actually painted this lady with a napkin,” Johnson said of one of the most remarkable pieces in the collection, a two-toned portrait of an old Hollywood actress glamour photo stretched vertically almost to the point of distortion and bleeding at the edges into pure impressionism.

But despite the experimentation, despite the breathtaking carelessness with which Johnson seems to approach his work, the woman is beautiful and engaging and conveys something when you stand in front of her.

All of Johnson’s paintings are like that. There is something behind the eyes of almost every portrait on the wall. A richly layered and vibrant portrait of one of his friends leaning back on a bar conveys the ease and self-assurance of a young Woody Guthrie. A smaller portrait hanging almost directly above it, a bearded man on a white canvas, is so breezily imagined that it looks like a doodle. The emotional impact on the viewer, however, remains undiminished. It’s that emotion, Johnson said, that determines whether or not a piece is a “keeper.”

“The learning process for any kind of art is just failing over and over again,” Johnson said. “I was never taught to paint properly, and I still don’t know how to. Me holding a paintbrush is like a gorilla threading a needle.”

As for the progression, the where to go from here, Johnson has a ready answer.

“Did you ever watch Bob Ross when you were a kid?” he asked. “I used to remember him making a painting and really loving it, and then he’d spend the last ten minutes adding clouds and bushes and ruining it. He would just add too much. Why did he need to add all that extra detail for?”

Johnson points to a piece in the middle of the wall, a portrait so unassuming it’s nearly overlooked. It’s a sliver of a face, a quarter-moon swimming in a dark pool. The expression is placid, noncommittal. Johnson said it’s his favorite piece in the show and the direction he’s headed.

“I just want to learn how to convey the same emotion using the least amount of brush strokes,” he said.

Print headline: Emotive marks, J. Chris Johnson is headed in a new direction with his artwork and leaving works of wonder in his wake.