I think Broadway 10 is coming into its own. The owners listened, they learned and they adapted. If you’ve been waiting to try it out, it’s time. 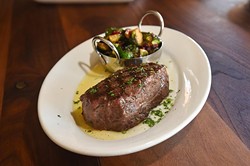 If a server asks how your meal is, tell him.

Tactfully, if possible. Kindly. But be honest.

It has taken me a good long time to be able to tell a waitress if there’s a problem with my meal. For one thing, it seems like a lot of people complain to try and get free food. That’s just crappy behavior.

It’s also difficult to criticize. When someone asks, “Was everything good?” it’s so much easier to blurt, “Wonderful! Thank you!” than to offer a reasonable explanation of why your meal was not good. That’s how restaurants get better. You’re more likely to go back to a restaurant that fixes their mistakes rather than one that needs to improve but doesn’t know how.

You don’t have to tell them, but I do. If I’m willing to write something for everybody to read, I need to be able to say it in person to someone from the restaurant.

Even still, I hesitated when the server at Broadway 10 Bar & Chophouse, 1101 N. Broadway Ave., asked me how I was enjoying my steak.

Honestly, it was burned. Inside, the 6 oz. prime “Scotch cut” sirloin ($21 with a side) was a perfectly cooked medium rare, but the crust had gone too far, imparting off flavors to an otherwise wonderful piece of meat.

She offered to replace it. Then she insisted. The next steak she brought out was perfect, a flavorful crust framing a picture-perfect red center. The food itself tasted great, but the service and attention to detail made everything even better.

Speaking of sweet, the panko-fried coconut shrimp ($14 for 6) were precisely that. I could have eaten 50 of these big boys with that perfect counterbalance of crispy, crunchy fried breading and tender shrimp. (Okay, maybe I could only eat 10, but I wanted to eat 50.)

If you are a fan of pungent cheeses, as I am, then the black pepper blue cheese wedge salad ($7) is right up your alley. It’s a wedge of iceberg lettuce, of course, but the lack of flavor from the greens just lets the powerful blend of cheese, onion and crisp chunks of bacon take over. This is not a healthy salad. But it is a good salad. 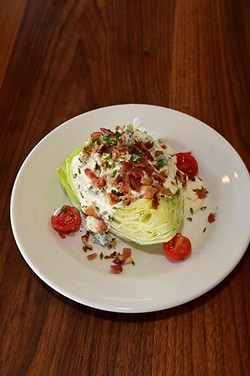 Likewise, the french onion soup ($5 for a cup, $9 for a bowl) is not going to fulfill your vegetable requirements for the day without also heaping generous amounts of cheese, cream and bread into the mix. I’m forever a sucker for this dish when it’s done well, and Broadway 10 definitely knows how to prepare a piping-hot crock of meltingly flavorful onions.

How fancy do you want a burger to be? Do you want it to be made from a special breed of Japanese cattle imported to the U.S. in 1992 and raised in Texas? Then you’re in luck. The Akaushi mushroom burger ($15 with a side) is a very hoity-toity burger made with a kind of beef that roughly translates to “red cow.” The mushrooms, onions and sauce made for a mildly sweet flavor that was pleasant but really overshadowed the beef.

While I enjoyed it, I really wonder what the Akaushi burger would taste like sans sauce and toppings. It just seems a shame to cover up such fine meat, but your mileage may vary.

On the side, I tried the smoked cheddar au gratin potatoes and the roasted Californian Brussels sprouts (included with entree or separate for $9). The potatoes were very rich and a little oily from the melted cheddar, and they tasted wonderful.

The Brussels sprouts were tender and had the delicate sweetness that comes from caramelization. A sprinkling of pomegranate on top gave it a tart contrast.

I’m incredibly happy that Brussels sprouts are back in favor and skilled chefs are taking the time to reintroduce them into civilized society.

Broadway 10 just feels fancy. With a sky-high ceiling and expansive windows, it has an open, airy look that is different from the claustrophobic atmosphere of some fine-dining restaurants.

I think Broadway 10 is coming into its own. The owners listened, they learned and they adapted. If you’ve been waiting to try it out, it’s time.

What works: Excellent service and an offbeat fine dining menu. What needs work: The wood-fired stove is unpredictable early in the day. Tip: Lunch is a great chance to sample the menu before scheduling a big night out.