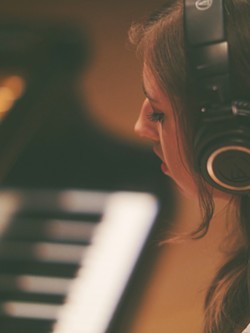 Even as Brianna Gaither set out to document the most ambitious album recording cycle she’d ever conceived, she never imagined it would also lead her to her husband.

Her Resonate Campaign is a $20,000 crowdfunded album and documentary project in which the Oklahoma City singer-songwriter worked with 10 local producers over a 10-month period.

The typical album experience was not something she had any interest in when she conceived the project in 2015. Gaither wanted more.

“I wanted it to be bigger than that for the purpose of really investigating what’s happening here in this area,” she said.

Resonate could serve as both a statement on the unlimited potential found within faith and a testament to the state’s great talent.

Gaither’s campaign resulted in Vanity, a 10-song project that maintains a deep personal connection to the songwriter through the varied lenses of a talented production ensemble. The public gets its first taste of Vanity Jan. 28 at The Venue OKC, 1757 NW 16th St., during the campaign’s listening party and trailer screening event.

Gaither met local producer and musician Adam Chamberlain in fall 2015. Their work chemistry was immediately apparent, so much so that they soon began dating. Chamberlain proposed to Gaither on Feb. 2 as she embarked on her 10-month recording journey. The couple married July 2, almost the exact middle date for the Resonate Campaign.

“I obviously was not thinking I would have a wedding in the middle of this project before it began,” Gaither said.

Then again, Resonate ended up taking Gaither in many unexpected directions.

Gaither released the album Love Is Patient in 2011. For that project, she worked with one producer and was fairly hands-off when it came down to the technical production.

Shortly after the release, Gaither injured her wrist, which significantly reduced how much she could play, perform and practice. She was a full-time musician, but the injury and a desire to move on to new things convinced her to seek a different career.

Gaither found a job at a Norman-based technology startup. She thought she had said goodbye to her music-playing days.

“I had totally surrendered it,” Gaither said. “I was just like, ‘I love music and it will always be with me, but it is not my No. 1 and I am going to be a content, happy person no matter what happens next.’”

Try as she might, Gaither couldn’t shake her desire to create. While she wanted to return to artistic expression, she struggled to find the motivation to go back to the same, typical album process.

“When I realized I didn’t have enough energy for it, my big question was, ‘Why?’ I’m asking myself that and I’m praying, ‘Why don’t I love this enough that I want to do it?’ What I was realizing is that my goals are bigger than that. My desires were about building community more than they were about just jumping back to where I was before.”

Gaither’s big dreams led to Resonate, which began in earnest in 2015. The Resonate community’s goal is to break down barriers from within a Christian worldview and promote creative collaboration between individuals, including her small team of creatives and everyone else they work with for however long they might be involved.

She had her album and documentary concept roughly sketched out by the end of 2015. In January last year, she launched an Indiegogo campaign to help crowdfund the project. Resonate met its $20,000 fundraising goal within one month.

“We were super blessed, and the community came around it,” she said. “They were just so supportive.”

The album’s sounds range from raw acoustic live recordings to faster-paced electronic pop songs. Vanity, named for one of the tracks on the compilation, might be sonically varied, but Gaither believes the release is the best artistic representation of herself to date.

“I would absolutely say that through this project, I found my inner voice,” she said. “I have a little bit more of an assertive voice than maybe I had in other projects.”

The documentary follows the recording process and shares a behind-the-scenes look at the making of Vanity. More than that, Gaither wanted the film to explore the city’s creative potential. With co-filmmaker Weston Waugh, she interviewed community members. Their comments are intertwined with often-personal testimonials from Gaither to form the story’s narrative.

One of the documentary’s biggest takeaways is that big dreams can become attainable in any environment through the power of faith.

“You can have really ambitious goals in a small city and be successful in what others would perceive to be heavy limitations,” Gaither said.

The documentary also puts perspective on the theology of creativity. Gaither said God’s creative spirit is apparent throughout the Bible, from Genesis to Revelation.

“That brings the question, ‘What potential do we have, as people who are connecting with the creator of the universe, to create out of that place?’” she said.

It’s been a long and exciting year of work for Gaither, and she’s equally as excited to see the culmination of her labors within the next month or two.

“I’ve never been prouder of a project or more enthusiastic about one,” she said.

Vanity and its companion documentary are set for release around late February. The exact release date is still to be determined.