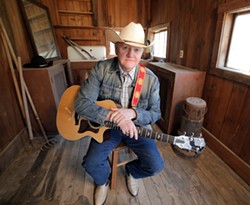 Florida singer-songwriter Grant Maloy Smith felt he had discovered the perfect lyric. He just needed some way for it to make any sense.

Spitballing around one day with words and phrases and no end goal in mind, he blurted out a song about having never seen the rain. Of course, almost everyone who was not born blind or in the southern valley of Egypt’s Nile River has, in fact, seen rain at some point. Still, the words had a poetic appeal to Smith.

“I liked it so much that I had to figure out how to make it make sense,” Smith said in a recent phone interview with Oklahoma Gazette.

The song idea eventually led Smith to write the album Dust Bowl: American Stories, released June 1. “Never Seen the Rain” is the eighth track on the 13-song album that spent a few weeks in the top 10 of Billboard’s Americana/Folk sales chart.

The concept project tells several stories anchored in one of American history’s worst natural disasters, a time period that will forever be essential to understanding the later intricacies of Oklahoma and United States history.

Smith brings songs from Dust Bowl to Oklahoma for the first time Saturday when he performs at The Centennial Rodeo Opry, 2221 Exchange Ave. Tulsa-born country sister duo The Herrold Sisters are also included on the show’s bill.

The roots, folk and country recording artist still remembers the night he first connected his existing lyrics to the specific time in American history.

“A little light bulb appeared over my cowboy hat, and I thought, “Well, I remember a little bit about the Dust Bowl from school, but not really a whole lot,’” he said.

Smith sat down at his computer to research the 1930s atmospheric disaster that saw a cloud of dust and dirt hover over a region including Oklahoma, the Texas panhandle and other parts of the Great Plains.

The thick, dust-filled air was hard to breathe and made farming impossible. A combination of extreme drought and ill-suited agricultural practices by people in the region contributed to the conditions.

Historic records say around 3.5 million people left the Dust Bowl area for other places within the country — many to California. The atmospheric disaster came as the Great Depression had taken hold of the U.S., and the influx of work-seeking migrants to certain areas put significant economic strain on residential populations in popular destinations like Bakersfield, California, creating great tension between the two groups.

Smith fell into a research rabbit hole reading about it all online. He was struck by the tenacity of those affected and did not leave his chair for more than four hours.

“Those people were tough — they really were,” he said. “We’re not tough like that anymore. I don’t care who you are. We have it so easy today, relatively speaking, compared to what they had to go through.”

Some parts of Dust Bowl’s liner notes resemble the back of a college term paper. Smith included a research bibliography of books and websites he used to make sure his music was rooted in factual history.

Smith, in addition to performing as a folk singer-songwriter, also scores independent films, including 1998’s Melissa Leo-starring Code of Ethics and 2001’s Pray for Power. The songwriter said he approached Dust Bowl in a similar way to his past work in film. He wanted his storytelling to have cinematic grandeur.

Though he thoroughly researched the time period, Smith intentionally avoided other creative works centered on the Dust Bowl like John Steinbeck’s 1939 literary masterpiece The Grapes of Wrath or its 1940 film adaptation.

“I wanted to pull from the history and make my own work of art,” he said.

One of the songs on Dust Bowl is titled “Isht a Lhampko,” a Choctaw phrase meaning “Have strength.” Smith wrote the song’s lyrics from the hypothetical perspective of a Choctaw tribal member of the time.

“If you read most of the books about the Dust Bowl,” he said, “you won’t find a single word about [Native Americans] anywhere in probably 90 percent of the books written about it, and that’s a shame.”

Smith almost neglected to acknowledge Native American presence in the area as well until a friend suggested he add a song telling their story. The songwriter sought assistance from Teresa Billy, assistant director of the Choctaw Language Department.

“For me, that was a pivotal point in the writing of the record,” he said. “That really helped me.”

Billy said she first got an email from Smith explaining his work in the summer of 2014.

“It was very noble of him to honor and recognize the tribes,” Billy said.

She helped Smith find a Choctaw phrase that best encapsulated the Native people’s tenacity he was trying to express in the song. Later, she emailed him an audio file of the song title’s proper pronunciation.

Billy also went through Smith’s lyrics and made sure they were culturally sensitive and not patronizing.

“It’s a beautiful, well-written song, and he sings it very well,” she said. “I love his pronunciation. That’s one of the things when you’re a fluent speaker; you like to hear it pronounced right.” 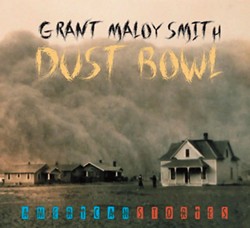 Though he looks and sounds the part, the Dust Bowl singer-songwriter has no family or personal history in Oklahoma.

“I feel like I do now,” Smith said, “because I’ve immersed myself in it since 2014, when I started this album.”

His family history might be based in the Appalachian hills of Kentucky and West Virginia, but Smith can claim Okie artistic heritage through his admiration of Woody Guthrie, a figure who was a direct product of the Dust Bowl and Great Depression eras.

Smith said his biggest takeaway from working on the project was an appreciation for how tough the people of the time were and how that kind of fortitude seems to have vanished from the people of today.

“When I see people walking down the street, staring at their little phone, and they walk into a signpost and get all angry, I’m like, ‘Man, you don’t know what it’s like to really struggle,’” he said.

As an adult, Smith describes himself as someone who loves to learn about history — particularly the Civil War. But he has not always felt that way.

Like many other young students, Smith was forced to read The Grapes of Wrath in school. He learned about the Dust Bowl in his history class, but that prior exposure had no lasting impact on him.

Through the storytelling and relatable personal emotion found in Dust Bowl, Smith hopes listeners connect with people of the time in a way that is not possible through a textbook.

“Music reaches people on a different level than plain words by themselves,” he said. “Words are powerful enough, but music — it’s not that it’s more powerful — but it reaches people on a different level. And when you combine the two — when you combine prose and poetry and melody and the acoustic dynamics of music — it’s powerful.”

Smith wants to make Dust Bowl the first in a series of concept albums based on specific historic events and periods. He believes it is his life’s calling.

“It’s so powerful when you connect the music to real history,” he said, “and I’ve enjoyed it so much.”