Singer-songwriter K.C. Clifford marks a new chapter with a pair of live recording sessions at The Blue Door 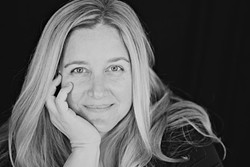 K.C. Clifford is a mother. Her daughter Beatrice is 4 years old and her son Hollis is almost 2. Motherhood is a role Clifford cherishes.

But like all people, Clifford is not one-dimensional. She is also a spouse, a friend to many and a writer, storyteller and musician. Yet for nearly five years, Clifford put much of her art on hold to raise her young family.

She marks a return from her quasi-hiatus 8 p.m. April 13-14 with two live recording sessions at The Blue Door, 2805 N. McKinley Ave. From those sessions, she will create an as-yet-untitled live album of new, original material. It will be her first music release since May 2012.

Her return to music and songwriting is as much about showing this side of her life to her children as it is about taking the time to feel complete as an individual, Clifford said during a recent Oklahoma Gazette interview.

“It’s really easy to get lost in your identity as a mom,” she said. “You can lose your life in the throes of the ordinary and daily [experience] of parenthood, of keeping tiny humans alive.”

In a strict sense, Clifford’s Blue Door sessions are a predecessor for an upcoming, already-written studio album release planned for the near future, but the live project is far from a throwaway.

Clifford said her music is best appreciated in a live setting. This project marks the second live album she has recorded at The Blue Door, and her goal is to once again capture the essence that only exists onstage.

“I’m a storyteller,” she said. “The people who really appreciate what I do would say everything is the live performance, that the records are great, but to really understand it, you have to see it in a storytelling format.”

Clifford’s children have been enveloped in music from even before they were born. She toured during her pregnancy with Beatrice and performed with her guitar pressed against her belly.

As a toddler, Beatrice’s parents brought her along with them to concerts. Clifford recalled one time when her husband David “Dr. Pants” Broyles was playing music on his iPod. After one song finished, she noticed their daughter, then just 1 year old, started clapping. Clifford realized they were raising their child to appreciate music and art, even if it was somewhat unintentional.

Some things have changed over the years, Clifford said. Before starting her family, the musician could wake up and spend a day writing a new song. Parenthood, however, offers few such luxuries.

“I have to carve it out of my schedule,” she said. “I write after the kids go to bed, in the middle of the night.”

These days, she spends a lot of time writing with Seattle-based pianist Dan Walker. She wrote for the guitar for much of her career, but she has become intrigued with writing for the piano.

Orchestrating schedules between interstate travel and parenthood makes writing together a challenge. Clifford said she and Walker recently set up a three-day writing retreat, hiring a sitter to help watch her little ones as the musicians focused on putting together new material for future release.

She tries to keep her identity as a musician intact no matter what she’s doing in life. Clifford’s father is a musician, too, but for years, he dropped his craft to concentrate on business and “practical” ways to support his family. He returned to music, his true personal passion, later in his life. Clifford said he sometimes regrets the time he spent away from it.

“Picking it back up reminded him how much he loved it,” she said. “Ever since he picked it back up, it’s been a fixture in his life.”

Before motherhood, Clifford worried about staying current. Taking any time away from music and potentially squandering whatever momentum she had terrified her.

“I can’t allow those kinds of fears to shape my decisions anymore,” she said.

Clifford gained new perspective when she became a parent. She realized she does not have to choose between family or music.

Music is more enjoyable and fulfilling when she can ground the value of her art in how it makes her feel and how it impacts the lives of others. Clifford said someone recently told her that they thought the only thing that mattered as a musician was their number of Spotify followers.

“I thought, ‘What matters is when I stand up and I say true things and people feel less alone in their life,’” she said. “I think that has to be what matters, because if it’s Spotify numbers, I’m sunk; it’s over. If that’s what it’s about, I should quit right now because I don’t give a crap about Spotify numbers.”

For a long time, she was motivated by the hope of stumbling into her next big break or what the future might hold. Today, she said she finds more fulfillment in the present moment and fully appreciating her children, relationships and everything that encompasses a full, balanced life.

“There’s always that thing that’s cooking, and it could happen at any time — that break, that phone call, that conversation that you had with the guy that wants to put you in a TV film,” she said. “There’s always some elusive thing that keeps you moving. You chase that, but there’s so much you miss — the beauty of just doing the art and having joy in the today.”