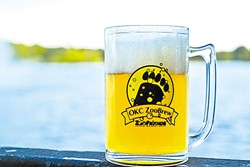 Zoo Brew is one of the only adults-only events that the Oklahoma City Zoo hosts, and it is a favorite for staff and guests alike.

On Friday, guests can spend an evening on the unique grounds of the OKC Zoo with seasonal and local beers and bites from Contemporary Catering and OKC Zoo Catering.

“This is the most fun event we have,” special event planner Brianne Hinojosa said. “We start planning right around July.”

Local band Banana Seat will perform, and the party benefits the Patricia and Byron J. Gambulos ZooZeum. The ZooZeum was created in part due to Amy Dee Stephens’ two books about the history of the zoo. Her second book, Oklahoma City Zoo, 1960-2013, arrived on bookshelves last month. Proceeds from Zoo Brew VI will help ensure that the ZooZeum is a place of continuing education about the history and future of the zoo, which is over 110 years old.

“The beers we like to bring to showcase are beers that are new to the state,” said Byron Blake, general manager of Byron’s Liquor Warehouse, an event sponsor. “We also love to do seasonal releases, the

Oktoberfests, the pumpkin ales, so that people know what they have to look forward to.”

The event is in Roughneck Pavilion, near the carousel.

The beer comes from a dozen distributors and includes mostly seasonal brews new on the scene this year.

Blake elaborated on the beers, particularly local ones, he’s looking forward to bringing to the party.

“I would say this year, COOP ... is definitely on my list. Another is Santa Fe Brewing Company’s Oktoberfest and, even thought it’s not technically a beer, Ace Pumpkin Cider.”

The event is open to both members and nonmembers of ZooFriends, but keep in mind that the event sells out every year.

It’s best to get your tickets as soon as possible to avoid missing out on the fun. Pre-purchased tickets are available the night of the event at the global pavilion inside the entrance.

Attendees receive a commemorative tasting beer mug to sip to their heart’s content. The event will happen rain or shine. On the off chance there is drizzle, bring your umbrellas and dance in the puddles, especially after a pint or four.