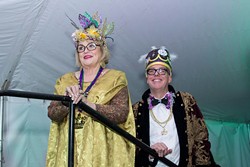 No American town has more well-known nicknames than New Orleans, and for good reason. For almost three centuries, no other city in the country has boasted more flamboyant diversity in race, cooking, music and culture, so it makes sense that such a place would be known by multiple tags.

But it’s one of New Orleans’ lesser-known nicknames that might have the most appeal these days. After all, during the most controversy-laden time most Americans have ever seen, what could be a sweeter relief than a night of partying in The City That Care Forgot?

The Paseo Arts District’s SixTwelve invites guests to cast off the stress of the daily news and spend a night of revelry at its second annual Mardi Gras Ball 8-11 p.m. Feb. 18 at 530 NW 28th St.

“We’re moving it this year to the lot at 28th and Dewey,” said Amy Young, SixTwelve founder and director. “We just need to have more space for everybody, and this place lets us put up a bigger tent and, hopefully, sell some more tickets.”

Proceeds from the annual soiree help fund the operations of SixTwelve, a school and event center founded two years ago by Young that has quickly turned into a kind of community hub for the now-bustling Paseo Arts District.

SixTwelve has also become a leader in providing services for the arts community, hosting a weekly girls’ art school and providing working artists residencies in an exchange program between OKC and Savannah, Georgia.

“The things I’m the most proud of are being able to provide preschool for free and providing programs that people in the community can work together on for free,” Young said. “So Mardi Gras was the closest big event to our opening two years ago, so this has become kind of a birthday party for SixTwelve.”

As parties go, it’s a doozy. There’s beer donated by Anthem Brewing Company and food from Picasso Cafe, and Lafeyette, Louisiana, zydeco band Chubby Carrier and the Bayou Swamp Band will perform. To add a bit more old N’awlins flair to the evening, white tie is encouraged, but not required.

Even those unable to attend the party can still vote for the Mardi Gras king and queen (or king and king) on SixTwelve’s website. This year’s contestants are Vicky and David Hunt vs. Scotty Irani and Monte Milburn. Votes are cash donations, and the couple with the most cash on the night of the party are crowned this year’s royalty.

“Eventually, we’re going to have to move it to a bigger venue so we can fit more people,” said Young of her hopes for the event’s future. “But I’m really looking forward to it. It’s a blast.”

Tickets are $75 each or two for $140. Sponsorships are available. Visit sixtwelve.org.