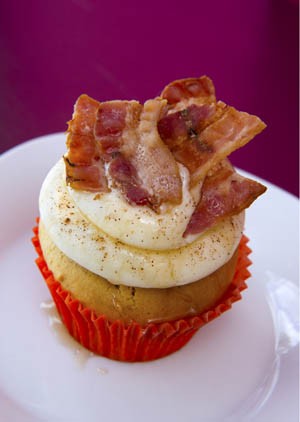 Bacon played a part in the 2001 movie The Lord of the Rings: The Fellowship of the Ring when two naive characters were cooking bacon, which, in turn, tipped off the evil ringwraiths about the location of their camp. Frodo Baggins knew the risks of being spotted with a burning campfire and the smell of bacon, but by that point, his foes were on their way. Fortunately, ringwraiths won’t keep us away from our love of bacon here in Oklahoma City — and it’s not just on the breakfast table. Here are some more unusual places for bacon aficionados to find it.

Pops 660 Oklahoma 66, Arcadia First, go for the bubbles at Pops with a Chocolate Covered Maple Smoked Bacon Soda. It is described on the soda’s Facebook page as tasting like a cold hot chocolate seltzer with a salty finish and the scent of bacon. “We blow through this soda at an ungodly amount,” said Pops employee Dalton Couch. It’s made with pure cane sugar, and all the flavors in the tongue-twisting title come through individually as they blend together. This is a wickedly addictive soda.

Bricktown Candy Co. 100 E. California Ave. This candy store in Bricktown offers swirly bacon lollipops and gummy bacon. There are also bacon mints, bacon gum balls and bacon cotton candy that shouldn’t be missed. “We have bacon maple gelato,” said employee Janissa Chandler. “We have a lot of people asking for it when we occasionally run out. It’s that popular.”

Packard’s New American Kitchen 201 NW 10th St. For a bacon happy hour, get the Honey Pepper Bacon Old Fashioned cocktail at Packard’s. “We use our own honey pepper bacon and infuse the bourbon here, in house,” said manager John Ross. Added to this cocktail are maple syrup and bitters and a perfectly carved, floated piece of orange peel. This drink is smooth — the orange flavor hits first, followed by a mellow bacon bourbon finish. “It’s one of our top three sellers,” Ross said.

The Daily Donut 10911 N. Western Ave. Mondays are bacon doughnut days at The Daily Donut. “We sprinkle a generous amount of bacon on top of either our chocolate or maple doughnuts,” said Michael Tran. “The maple bacon is definitely the more popular one. I think it reminds people of having bacon and pancakes with maple syrup for breakfast.”

Pinkitzel Cupcakes & Candy 150 N E.K. Gaylord Blvd. Bring home the bacon in your very own (inedible) bacon wallet from Pinkitzel. The store has a wide variety of bacon- themed items. Who could be without bacon toothpicks, bacon bandages, or bacon soap? And for proper dental hygiene, there’s bacon toothpaste and bacon dental floss. “The Sizzling Bacon Candy is very popular. People come back for it after trying it once,” said salesman Philip Smart.

Cupcakes to Go Go 2524 W. Edmond Road, Edmond The Canada, Eh? cupcake is a pure bacon indulgence at Cupcakes to Go Go. It is a bacon-maple French toast cupcake with cinnamon cream cheese frosting and is lightly drizzled with maple syrup and topped with bacon. “Once people get past the ‘bacon in the cupcake’ idea, they really love it,” said employee Emily Embrey.