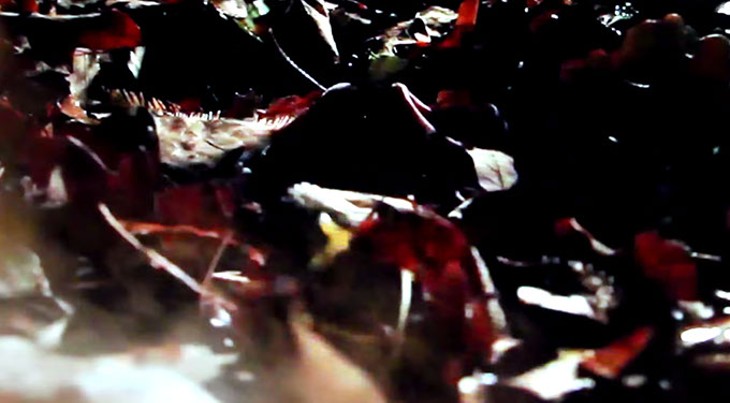 Peyton Bighorse and Kelli Mayo run roughshod over any hints of convention with their lo-fi, ugly-pop sound. With this video, the young musicians showcase the minimalistic ethos of their idols and influences, from Babes in Toyland to The Pixies, X, The Ramones, Nirvana, Sleater- Kinney, Bikini Kill and Screaming Females. Sludgy, dense guitars ride hard to the anarchic rhythms of the kick drum and cymbals.

The comparisons are valid, but this is no copycat band. As both performers skirt their teens, abrasive and blindingly chaotic “Van Gogh” shows the girls traversing the line between angst and self-awareness.

“I don’t know a thing about love before Van Gogh/stereo,” Bighorse wails. She doesn’t need to. Here, it’s about passion.

Smoke-filled frames cut to live scenes that are desolate and dark. Peyton blurts and moans while she stomps a guitar pedal with a bare foot. Mayo whips her blond hair forward in time to her cymbal crashes. Rapid video cuts take viewers into the girls’ rehearsal space, a parking lot, a kitchen, a desert and a pile of leaves.

The editing style is lighting-fast, a flywheel of momentum set to destroy itself with its own power.

It’s the perfect timing for this new video. As the pair develops new material (no release date has been set), Skating Polly will open for Perfect Pussy on several East-Coast tour dates in March before heading to England for its first overseas tour in May as it opens for Babes in Toyland.

The song’s vocals show maturity and a growth past the “scream until it hurts” method more prominent in some of their songs.

Mayo has taken full control of her drum duties — she hits harder and with determination, as if her kick pedal is an accelerator.

Bighorse’s voice is steadier, deeper, more sultry and baleful. It’s a gritty follow-up to “Alabama Movies,” another gut-punch tune from Fuzz Steilacoom, which was named one of Oklahoma Gazette’s best songs of 2014.

Print headline: “Van Gogh” stereo, Skating Polly hits hard with its latest video debut, made on the heels of the announcements that the duo is working on new music and will soon embark on its first overseas tour.