Educators of all sorts have learned that the student who is dutifully sketching away in the middle of a lecture is actually listening to what is being said. The doodle — sketch being a more artistically respectful term — used to be punished by strict teachers, but the artistic temperament does not do well when forced to focus on just one thing, especially if that one thing is a teacher’s droning voice.

When Norman businessman Jonathan Fowler sat on the Norman Public Arts Board with O. Gail Poole, he noticed that Poole was always writing or sketching in a sketchbook.

“I didn’t know about Gail’s history as an artist,” Fowler said. “He was just a guy that served on the board, and we would have coffee sometimes. He was so humble that he never mentioned what a remarkable artist he was.”

In fact, Poole was one of Oklahoma’s most accomplished artists, and some of those sketchbooks on which he worked during the meetings are on display at The Depot, 200 S. Jones Ave., in Norman through June 26. Fowler curated the show after discovering the sketchbooks while looking through Poole’s archived work. All of Poole’s unsold work was left to his daughter Nicole when he died in 2013.

“Nicole and I met through a mutual friend, and she invited me to see his archives,” Fowler said. “When I saw the sketchbooks, I got really excited and went through them immediately. It was like getting to re-experience Gail and, at the same time, see this whole other side of him.”

Classifying Poole’s work is nearly impossible. Shari Jackson, owner of The Depot, said Poole was talented in many different styles and skill sets, including pen and ink, watercolors, pastels and oils. His subjects ranged from landscapes to portraits and cartooning. He was a master of many diverse styles.

“Nicole and Jonathan picked a selection of sketchbook entries that beautifully reflect who Gail was as an artist,” Jackson said. “All the skill sets and styles available are on display.”

Sketchbooks serve as an externalization of the mind of the artist. As Fowler found out when he searched through the books, Poole’s subjects ranged from the playful to the serious, dark and even humorously crude.

“Gail was vocally political early in his life,” Fowler said, “especially about how important he thought rail was for Oklahoma. At some of the ACOG (Association of Central Oklahoma Governments) meetings, he would have these very poetic words about railroads juxtaposed next to a beautiful drawing of a train. Later in life, he was less vocal, but the sketchbooks continued to be an important outlet for his politics.” 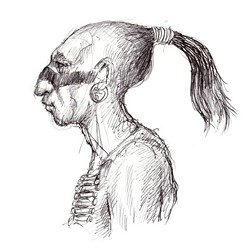 They contain all different kinds of drawings, including early sketches of works that eventually appeared in a different form. The original sketch for “Mind of Man,” a painting now part of the State Capitol collection, can be found in one of them. It’s like a glimpse into the development of the art itself.

The show features ten large drawing boards with multiple sketchbooks on each, all opened to a particular page. Two iPad kiosks in The Depot allow visitors to virtually flip through the other pages in the books. Twenty-five framed giclée are also included in the show. These are sketches lifted from the books and professionally photographed by Neil Chapman. Many of the pieces at the show, including many unframed prints and a coloring book for children, are for sale.

As Yet UnNAMED, The Sketchbooks of O. Gail Poole

Speaking of As Yet UnNAMED, O. Gail Poole