Legendary metal band Slayer stops at The Zoo Amphitheatre on its farewell tour. 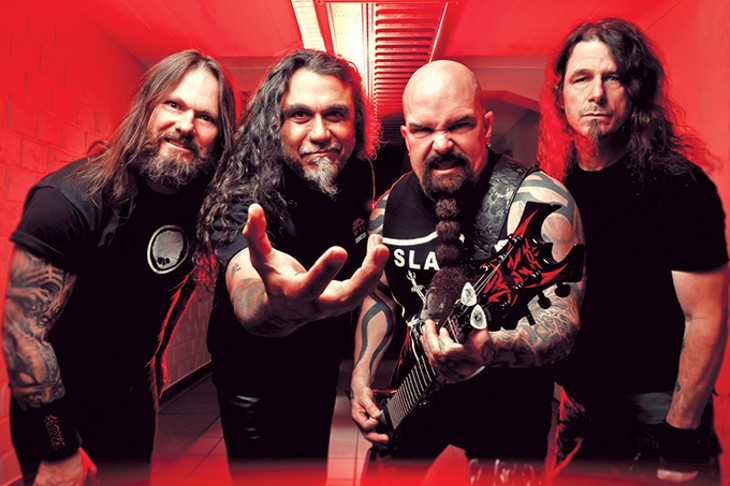 Released in October 1986, Reign in Blood was Slayer’s third full-length studio album, but for many soon-to-be-converted metalheads in the decades since, it remains their first exposure to a lifelong obsession.

“Slayer’s like the gateway drug into metal for a lot of people,” said Keeno, guitarist and vocalist for Oklahoma City progressive death metal band Dischordia.

Though Dischordia’s latest release, Binge/Purge — a two-song concept EP that’s only about five minutes shorter than the entirety of Reign in Blood and features ukulele, marimba, flute and the Rose State College Chorus — has little in common with Slayer’s distinctive style, Keeno said discovering the band was a revelation when he was first beginning to play the guitar.

“The first thing I ever heard was Reign in Blood,” Keeno said, “and I was like, ‘What the hell did I just listen to? That was amazing!’ And I was hooked after that; I checked out everything from then on. My favorite album is still probably South of Heaven by them, but Reign in Blood was the end-all the moment I heard it.”

Spawned in Huntington Park, California, in 1981, Slayer originally drew inspiration from the new wave of British heavy metal bands Iron Maiden, Judas Priest and Venom, but guitarists Kerry King, Jeff Hanneman, drummer Dave Lombardo and vocalist and bassist Tom Araya played at punk rock’s blistering speed in a style that would become known as “thrash.” The band, which stops at OKC’s The Zoo Amphitheatre Aug. 16 on its farewell tour, also incorporated Satanic iconography and graphic violence into lyrics and album art in a way that was still novel enough to be shocking at the time, creating controversy and earning a devoted cult following, influencing black metal, death metal, grindcore and other subgenres of extreme music.

Randy Blythe, vocalist for Lamb of God, which serves as a supporting act on Slayer’s final tour, said he’d never heard anything like it before.

“The Reign in Blood record has a certain rawness to it,” Blythe said. “And it’s not even like 30 minutes, maybe 28 minutes. I think the brevity of it and the efficiency of that record really, as a high school punk-rock kid who wasn’t really listening to much metal, probably smacked me pretty hard in the face. … When I started listening to punk rock, the impact of the songs, I was like, ‘There’s not a lot of wankery going on here,’ you know, ‘There’s not a lot of crap.’ At that time, it was the ’80s, and on the radio, you had Air Supply and shit like that, so you’re just like, ‘Oh my god; I wanna throw up in my mouth.’ Then you hear this, and you’re like ‘OK. This is it. They’re getting it. They’re getting to the point,’ and it was amazing. It was brutal.”

Mich’ela Creel, vocalist of Oklahoma City hard rock band Saint Monroe, said she was a fan of classic metal bands such as Dio when she first heard Reign in Blood.

“Slayer took me from the lighter side to the more extreme side,” Creel said. “Their lyrical content takes everything to the extreme point, where it makes the audience think about things, and I think that’s the whole point of music and art.”

Charles Gafford, bassist of Norman progressive metal band Via the Verge, said hearing Slayer for the first time gave him “an idea of what was possible and what [he] could do if [he] spent enough time with [his] instrument” in terms of “technicality and dexterity, speed.”

“It was just freaking intense, fast-paced, balls-to-the-wall, all out there,” Gafford said. “Whenever I first started seeing their live performance, that’s when I was really like, ‘Wow! These guys are doing something here.’ They seemed to be one of the first people to use pyrotechnics and had these ginormous crowds of people running in circles, having intense crowd participation that you don’t see in other genres.” 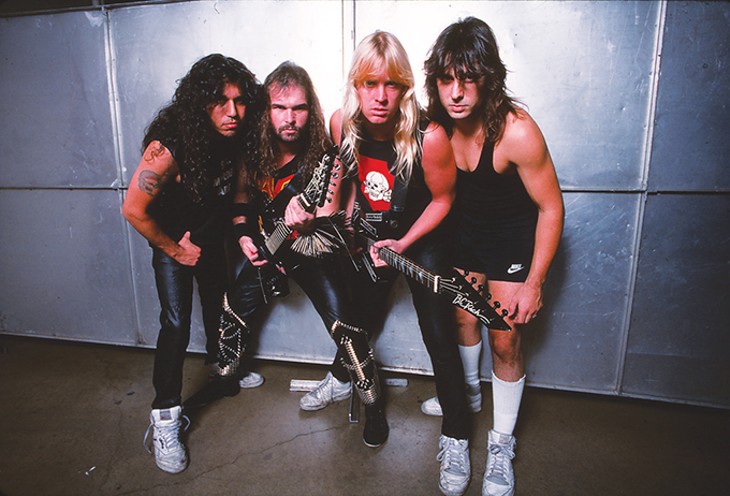 In 2013, Lombardo left the band, and Hanneman died of liver failure at the age of 49. 2015’s Repentless, Slayer’s most recent and highest-charting release, features drummer Paul Bostaph and Exodus guitarist Gary Holt, both of whom are joining King and Araya on their farewell tour. Bradley Nance, guitarist and vocalist of Oklahoma City stoner metal band Turbo Wizard, said Slayer’s longevity is an inspiration and its absence is almost unimaginable.

“Slayer’s one of those bands where the name itself is heavier than just about anything out there,” Nance said. “When you think thrash metal, you think Slayer, you think Metallica, you think Anthrax. Those are the big ones that stick out, and it’s crazy to see such an empire to come to its end. … I have nothing but respect and honor for people that are still doing shit like that.”

While Slayer’s legacy will be a tough act to follow, the band is legendarily hard to open for because diehard fans can quickly become impatient with other acts. Blythe said Lamb of God “learned very quickly not to give the audience any chance to even think about starting being dissatisfied” and “just go out and kill the whole time,” but some Slayer fans seem to settle for nothing else.

“The worst time we ever had opening for Slayer was when we toured with them in Europe,” Blythe said. “We were in Germany, and people were just looking at us like, ‘What is this?’ You’re not Slayer!’ They didn’t boo or anything. They didn’t throw anything, so that was good.”

South of Heaven (1988) and Seasons in the Abyss (1990) marked a shift to slightly slower speed on some songs, but Slayer has largely ignored musical trends, sticking to the signature style the band began developing from aptly titled self-financed debut Show No Mercy (1983) onward. Blythe said Slayer’s consistency is key to its enduring popularity.

“They’re not as extreme as a grindcore band,” Blythe said. “There are some bands that are more extreme or whatever, but there’s no soft spots in Slayer, and it’s super well played and they definitely have their own sound. Nobody sounds like Slayer. Slayer is its own deal, and they remain true to that. They created something, and they’ve stuck to it, so I think that’s why their fan base is so loyal.”

Lamb of God recently released Legion: XX, an album of punk and thrash covers, under the band’s original name, Burn the Priest. Dischordia’s Binge/Purge is available to purchase or stream at dischordia.bandcamp.com. Via the Verge is currently working on a new album that might be released as early as this fall. Saint Monroe is scheduled to perform Aug. 25 at VZD’s Restaurant & Bar. Slayer makes what might be its final Oklahoma City stop Aug. 16 at The Zoo Amphitheatre supported by Lamb of God, Anthrax, Napalm Death and Testament.