Oklahoma City’s one and only Rattlesnake Museum is open for business. The attraction slithered its way into town this summer, officially opening its doors to the public July 5. Stocked with 26 varieties of snakes, including every venomous species known to exist in Oklahoma, this might be the closest you’ll ever come to a live rattler.

Carl Sandefer, the museum’s curator, is a longtime snake enthusiast who has spent several years working with a number of different animals. After leaving his position at The Oklahoma City Zoological Park and Botanical Garden, he started Creepy Hollow, an educational facility for schools to visit. He soon realized it was easier for him to travel to the schools instead, so he closed the operation and found work with an animal wholesale company that would “supply the fish and birds and reptiles for pet stores from Little Rock to Albuquerque.”

His willingness to care for the animals did not go unnoticed. Whenever there’s an animal in need of a home, people often turn to Sandefer for help.

“I’ve had … everything brought in,” he said. “I usually have pretty good luck finding homes.”

He’s also one of the few willing to provide a home to venomous snakes, making him the go-to for those who happen to have an unwanted specimen on hand.

“They can’t help that they were born venomous,” Sandefer said. “So I always just kind of took ’em in and started putting them in tanks and just kind of stockpiling.”

One thing led to another, and before long, he realized an opportunity his compassion presented.

Sandefer told the story of how he came up with the idea to open a museum.

“We finally looked around and said, ‘Man, we have quite a few. We should do something with this,’” he said. “I thought, ‘Well, this is the Stockyards — cowboys, rattlesnakes — it’s perfect. It goes together.”


Inside, the snakes are clearly visible, their tanks stacked one on top of the other, creating a pathway for spectators to safely observe the reptiles from a comfortable distance.

Sandefer greets his new visitors with a warm “Howdy, folks! Come on in.” He spends a large part of the day answering questions and conversing with his visitors on a variety of snake-related topics.

“We tell them what to look for, what to listen for, how to see them — just stuff like that,” said Mark Perrine. “We get a lot of questions.”

Perrine works alongside Sandefer as an animal technician, and it’s not uncommon for the two to engage in more interesting subject matter with their guests.

“People like to tell their snake stories,” Sandefer said before recalling an incident in which he was attacked by a Western diamondback. His firsthand accounts are nothing short of impressive and are often riddled with educational merit.

“Carl’s pretty good with those snakes,” Perrine said. “He seems to know what he’s doing.”

Since opening shop, Sandefer has encountered people of all ages eager to learn about the snakes inhabiting their own backyard.

“The kids are really fascinated with them,” Perrine said. “The parents can’t get them out of there half the time. They’ll have to go back through three or four times before they can get them to go.”

Sandefer recounted the time he gave a snake shed to a young boy who was fascinated by the ones he had lying around the museum.

“You’d have thought I gave him a Ferrari,” he said. “He was so happy.”

However, the staff’s generosity doesn’t stop there. Entrance fees have remained donation-based since the beginning. And while the money does help keep the place going, no one is required to donate.

Though Sandefer’s initial budget hovered around a mere thousand dollars, it was enough to get the operation up and running. To offset some of the overhead costs, the staff breeds rats and mice, which they sell to pet stores and use to feed their own snakes.

As a testament to their success, the snakes’ rattling tails are often overridden by the frequent sound of door chimes that accompany the entrance of each attendee.

“We originally put that on so if we were working we could hear the people come in,” Sandefer said. “But yesterday we had to take it down because it was going off so much.”

The line was out the door the week the museum opened. Some days the small space swarmed with approximately 500 people. 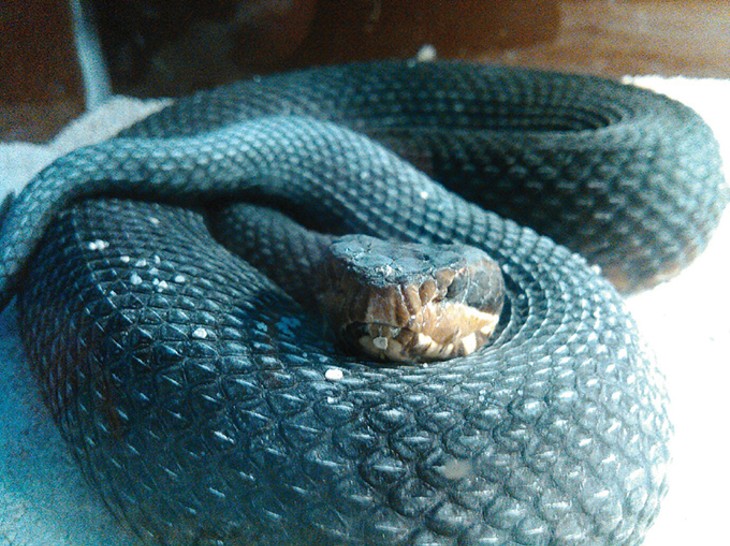 The crew is already planning to expand the size of the museum. The renovations are expected to be complete by mid-September. Now it’s just a matter of acquisition.

Perrine describes this as the hardest part of the job because it often requires him to take long drives to procure the museum’s newest members.

“The snake business is just like the used car business,” Sandefer said. “You can get anything you want. Really it just depends on if someone calls us up or we see something that we can use, a different species or subspecies.”

Aside from continuing to build his collection, Sandefer also hopes to engage his crowd in other activities such as live feedings. Though the crowd is well out of harm’s way, it’s no easy task — not even for a skilled handler.

“You can’t get careless,” Sandefer said. “It’s not if you get bit; it’s when you get bit.”

So far, they’ve performed one feeding in front of an enthusiastic crowd. And with repeat visitors coming back for more, the crew is working to come up with innovative ways to educate the public on their cold-blooded companions.

The Rattlesnake Museum is located on the corner of 15th Street and S. Agnew Avenue in Stockyards City and is open 11 a.m.-4 p.m. seven days a week.