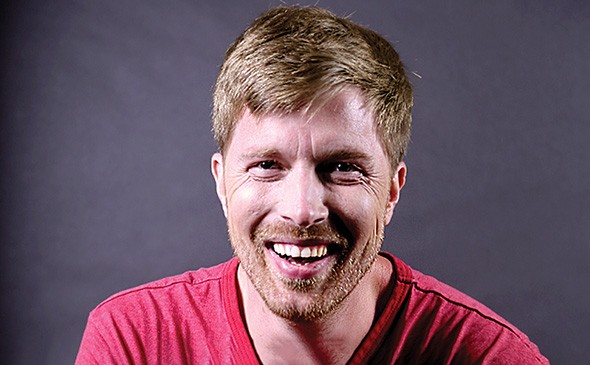 Your high school teacher, probably wearing a wacky bowtie, might have told you all the good chemistry jokes “argon,” but comic and podcast host Shane Mauss thinks science can be funny.

Mauss tackles heady topics with a sense of humor in his touring show Stand Up Science 8-11 p.m. Sunday at Opolis, 113 N. Crawford Ave., in Norman. The show, a spin-off of Mauss’ podcast Here We Are, pairs standup comedy with scientific discussions lead by local experts.

“Basically, this show is the combination of my two different worlds,” Mauss said. “In my stand-up, it’s mostly comedy with a little bit of science sprinkled in, and then in my science podcast Here We Are, it’s mostly science with a little bit of comedy sprinkled in. Stand Up Science is exactly 50 percent comedy and 50 percent science. I’ve engineered the show so it’s exactly that way, and I really like it because it shifts people’s perspective quite a bit. Because the science talks are only, like, 12 minutes, it’s nice and digestible and accessible and easier to kind of take in and pay attention to, and then it’s broken up with some laughs.”

The formula for scientifically minded comedy can be a little more complicated than a standard stand-up set, Mauss said. Delivering jokes can take longer when they require the comic to convey complex information to set them up, but “the payoff can be a lot bigger.”

“There are laughs to be had at all kinds of levels of information and thought, for sure,” Mauss said. “I think that intelligence correlates quite a bit with sense of humor too, so I think the two things really go hand in hand quite nicely. And the show is meant to be half science, half comedy, so I don’t ask my scientist to do comedy, and I don’t ask the comedian to do science material, either. It’s just a way of combining two really different ways of communicating information.”

Stand Up Science, Mauss said, is not “a 100 percent comedy show,” and it seems to be more successful when he keeps that in mind.

“I usually make sure that there’s laughs spaced appropriately, but I find that the less I obsess over punchlines the better the show ends up being,” Mauss said, “because a lot of times it’s easier to just deliver a quick punchline and get the cheap laughs and not really explore any big ideas, so I try to resist that urge quite a bit.”

A brief discussion of a scientific topic can be easier to sit through than a lengthy lecture, Mauss said, but too much comedy can also grow monotonous.

“Everything can kind of get repetitive when you hear it for long enough,” Mauss said. “It doesn’t matter if you’re the funniest person in the world; if you’re doing stand-up for three hours or whatever, that’s a really long time for people to be listening to the same person talking, so it’s just a great way of mixing things up.”

Part of the show’s purpose is to give Mauss — who has performed more traditional stand-up on Conan, Comedy Central and his hour special Mating Season — a platform for discussing ideas that would not necessarily play as well in a comedy club.

“It’s a really nice outlet for me to express some of the bigger concepts that I really just find fascinating and don’t necessarily have jokes for, just things that I think are important information to get out there,” Mauss said. “Then, also, it’s really just a way of doing much more cerebral material and higher-level jokes in front of an audience that’s receptive to that.”

But he also wants to introduce intellectual topics to an audience that might find scientific journals too dry or intimidating.

“I think that the public really can benefit from being a little more connected with scientific thinking, and I think having local scientists on the show helps engage people and engage that kind of thinking a little bit more, and it’s done in a little bit more digestible way,” Mauss said. “It’s done in a way that, if this is how school was for me growing up, I would have paid attention a whole lot more. I’m just kind of hoping to make it easier for people to learn things.”

While he tries to make sure everyone gets the basic information they need for an introduction to unfamiliar topics, curious audience members might find themselves with homework, but independent study is conducive to continued learning.

“I wouldn’t be surprised if sometimes there’s a couple of words that an audience member would have to look up, but I think that when you’re trying to get new information, that’s going to be inherent within the process,” he said. “I’m constantly having to look up new words when I’m reading and taking classes and stuff. I think that can be fun for people in a certain way when you hear a new word used and you kind of guess the context a little bit but you want to know specifically what it is. I think that almost can engage people even more sometimes.”

The show concludes with the guest comic and scientists joining Mauss onstage for an audience Q&A with “a free-flowing panel vibe.” As an experiment with many variables, sometimes including “an academic that’s really not used to having to speak in front of people because they just do their field research” and “a comedian asking really dumb or inappropriate questions,” Stand Up Science does not always work as intended, but Mauss said the unpredictability makes things more interesting.

“That’s part of the fun of the show; it’s a real mixed bag,” Mauss said. “The show is meant to put everyone out of their comfort zone a little bit. I’m not used to hosting a show, for example, and this is a different style of show too. My set is completely a hybrid of information and comedy, and the academics are usually used to giving talks in front of people, but this a different context and a different environment, and the other comic on the show is usually nervous they’re going to sound dumb because they’re not used to performing to such smart people, and the audience doesn’t quite know what to expect either. Usually, how that works out is it brings a really nice little bit of almost nervous energy in a way, an excitement that kind of keeps people on their toes and slightly off balance and keeps them guessing a little bit.”